25 Latin Phrases Every Student Should Know Posted by Brittany Britanniae on Jun 3, 2015 in Latin Language

These phrases will assist in all student’s ability to write well and impress their instructors. Thus, here is a list of Latin phrases that student should try to use and commit to memory during the summer for their fall terms (if they are not in summer school/session). Latin is more than a dead language; it is access to a better understanding to terms that are used in daily academics. 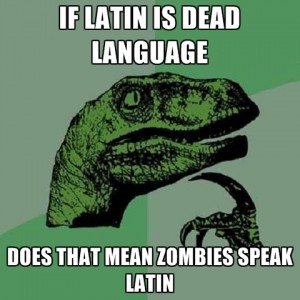 A generated meme created at Philosoraptor

1. Carpe diem: This well-known phrase comes from a poem by Horace. While there have been arguments about the exact translation, it is most commonly held to mean “seize the day” encouraging individuals to live life to the fullest today without expectation of a tomorrow.

2. Cogito ergo sum: Translated from the Latin, the quote means “I think, therefore I am” and comes from the writing of philosopher Rene Descartes. 6

3. Veni, vidi, vici: These famous words were purported uttered by Roman emperor Julius Caesar after a short war with Pharnaces II of Pontus. Translated, it means “I came, I saw, I conquered” an adage you can hopefully keep in mind come finals time.

4. In vino veritas: If you’re old enough to drink or have been around others who have imbibed, you’re more than likely already familiar with the wisdom behind this quote from Pliny the Elder meaning, “in wine there is the truth.” It is often followed up with “in aqua sanitas” or “in water there is health”– something all college students should remember.

5. E pluribus unum: Simply take a look at American currency to see this Latin phrase in use. It means “out of many, one” and is found on anything bearing the seal of the United States.

6. Et tu, Brute?: These are the famous last words of Julius Caesar after he is murdered by his friend Marcus Brutus in Shakespeare’s Julius Caesar. They mean “Even you, Brutus?” and are used poetically today to designate any form of the utmost betrayal.

7. Ad infinitum: You might be able to guess what this phrase means simply through its similarity to the word we use in English. It means “to infinity” and can be used to describe something that goes on, seemingly or actually endlessly, as some students might feel about certain classes.

8. De facto: In Latin, de facto means “from the fact” and in use in English it is often used to distinguish was is supposed to be the case from what is actually the reality. For example, legally, employers are not allowed to discriminate in hiring because of age, but many still practice de facto (in reality, in fact) discrimination.

9. In toto: No, this phrase doesn’t mean that the cute little dog from The Wizard of Oz ate something, it means in all or entirely. Think of it as saying “in total” in a really weird voice.

10. Ipso facto: Meaning “by the fact itself” this commonly used and misused term is denotes when something is true by its very nature. For example, if you don’t feed your dog you are ipso facto a bad owner.

11. Tabula rasa: When you were a child, your mind might have been more of a tabula rasa than it is today. This Latin phrase means “clean slate” and denotes something or someone not affected by experiences and impressions.

12. Terra firma: Those who hate to fly or get seriously seasick will be able to put this term to good use. It means firm ground, and you might be thanking your lucky stars to be back on it after a trip through the air or rough waters.

13. Mea culpa: If you want to admit your own guilt or wrongdoing in a situation, use this Latin phrase that translates literally to “my fault.” It’s a bit like a fancier, less outdated way of saying “my bad.”

14. Persona non grata: From the Latin meaning an “unacceptable person” this term designates someone who’s no longer welcome in a social or business situation. 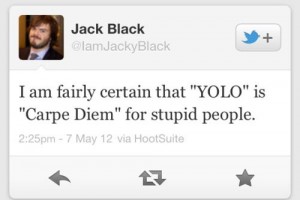 15. In situ: If something happens in situ it happens in place or on site, though the term often designates something that exists in an original or natural state. Like a rare species sighted in situ or an invaluable artifact found on an archeological site.

16. In vitro: Most students will be familiar with this term because of modern fertility treatments, but have you ever considered what the term actually means? In Latin, in vitro means “in glass” and any biological process that occurs in the laboratory rather than in the body or a natural setting can be called in vitro.

18. Ante bellum: During your history courses, you’re bound to encounter this term. It means in the most basic sense “before the war” and while it can be applied to any 4 war it is most commonly used to refer to the American Civil War and the Antebellum Era the preceded it.

19. Sic: Found in writing, this Latin word most commonly finds a home in brackets (like this: [sic]) when quoting a statement or writing. It indicates that there is a spelling or grammar error (or just something out of the ordinary) in the original quotation and that the publication has only reproduced it faithfully, not made an error of their own.

20. Id est: You’ve likely seen this term in writing before, even if you weren’t aware as it is commonly abbreviated to i.e. In Latin, it means “that is” and is used in English when the speaker or writer wants to give an example or explanation that specifies a statement.

21. Deus ex machina: In direct translation, this term means, “God out of a machine” and it harkens back ancient Greek and Roman plays. When the plot would become too tangled or confusing, the writers would simply bring in God, lowered in via a pulley system (the machine) and he would wrap it all up. Today, it’s still used in literature to describe a plot where an artificial or improbable means of resolving a conflict is used.

22. Exempli gratia: You’ll often see this term abbreviated to e.g. in writing. It means “for the sake of example” and when it see it in a sentence you can expect that is will be followed by some examples.

23. Et cetera: Few out there aren’t familiar with this term but may not know it as well when it’s spelled out like this and not abbreviated as etc. Meaning “and the others” it is used to denote that a list of things could continue ad infinitum (see below for definition) and that for the sake of brevity it’s better to just wrap things up with a simple etc.

24. Ex libris: Back in the days when books were rarer and more expensive commodities than they were today, it was common to mark your books with a label bearing your own name and this phrase which means “from the library of.” While not as common today, some true bibliophiles still use the labels.

25. Ibidem: Another abbreviated term, this word is more commonly seen in research writing in the form of “ibid.” From the Latin for “in the same place” it is found in footnotes and bibliographies to designate that the same source has been cited twice in succession.

26. Et alii: You’re unlikely to encounter this Latin phrase in its unabbreviated form, and will most likely only ever see it as et al when included. This is also a term that is found in footnotes and bibliographies which allows writers to refer to a large 3 number of authors without having to write each name out (for example, you could say that your source is Dr. Henry Jones et al.)