In celebration of 800th anniversary, this month’s text is the Magna Carta! 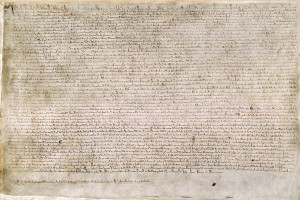 Cotton MS. Augustus II. 106, one of only four surviving exemplifications of the 1215 text.

Also Known As: Magna Carta Libertatum  (Latin for “the Great Charter of the Liberties”)

Author(s):  UNKNOWN. Many 19th-century historians suggested that the charter was written by one of its most influential signers, Archbishop of Canterbury Stephen Langton. However, the document’s exact wording was likely the product of months of back-and-forth negotiations between the king and his noblemen.

Content: The Magna Carta was an agreement between King John and a group of English barons in response to years of the king’s misrule and excessive taxation. Despite a closing line suggesting the charter was “Given by [John’s] hand,” the charter was more or less forced on him by the barons. The charter which would grant rights to all Englishmen.

Distinguishing Features: (1). England’s greatest legal document was a failure in its initial form. Intended as a peace treaty, this first Magna Carta never took full effect and failed to avert war between John and the nobles. (2). Multiple copies of the first Magna Carta (a sheet of parchment with approximately 3,600 words written in vegetable-based in) were distributed to individual English county courts during the summer of 1215. Today four of those copies survive; the British Library holds two, and the other two are in the collections of the cathedrals at Salisbury and Lincoln. (3). A handful of other Magna Cartas are versions issued between 1225 and 1297, when the charter officially entered the English statue books. In 2007, a 1297 Magna Carta sold at auction for $21.3 million, the most ever paid for a single page of text.

Where is it today:

There is no original, but four copies survive.

The plan for four surviving original copies of Magna Carta to be brought together in 2015, at the British Library.

The 800th anniversary of the original charter will occur on 15 June 2015, and organisations and institutions are planning celebratory events. TheBritish Library brought together the four existing of the 1215 manuscript on 3 February 2015 for a special exhibition. British artist Cornelia Parker was commissioned to create a new artwork, Magna Carta (An Embroidery), which was unveiled at the British Library on 15 May 2015 and will remain on display until 24 July. The artwork is a copy of an earlier version of this Wikipedia page (as it appeared on the document’s 799th anniversary, 15 June 2014), embroidered into the form of a tapestry.

In Pop Culture: The film Ironclad depicts the an ending of the Magna Carta. Jay-Z had album entitle Magna Carta Holy Grail.

JOHN, by the grace of God King of England, Lord of Ireland, Duke of Normandy and Aquitaine, and Count of Anjou, to his archbishops, bishops, abbots, earls, barons, justices, foresters, sheriffs, stewards, servants, and to all his officials and loyal subjects, Greeting. – See more here.