In honor of St. Patrick’s Day, this post will be completely about luck (Latin: felix or fortuna).Luck has been seen in the form of a four leaf clover, a rabbit’s foot, a rainbow, or even a lucky penny. Everyone has those moments, at some point in the lives, were they just hope and pray this “good luck” item works out. They hope it helps (somehow) to get that job, that new house, the lottery, etc. However, sometimes you don’t always have a rabbit’s foot handy. So, I have compiled a list of Ancient Roman “good luck” items that perhaps you can use. 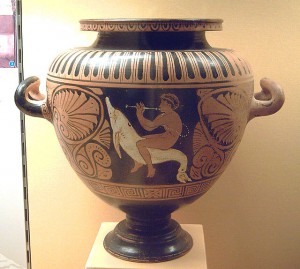 Dolphins are considered lucky by many peoples around the world, including the Ancient cultures of Greece, Sumer, Egypt, and Rome.  The belief comes from the known fact that ancient sailors who spent several months or years away from land, found that seeing dolphins swimming around their ships to be the first clear sign that land was near.

The tradition of touch pieces goes back to the time of Ancient Rome, when the Emperor Vespasian (69–79 AD) gave coins to the sick at a ceremony known as “the touching.” 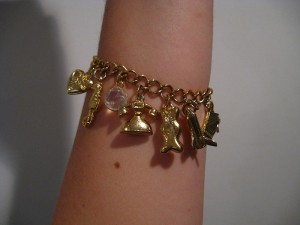 During the Roman Empire, Christians would use tiny fish charms hidden in their clothing to identify themselves to other Christians and for protection. Jewish scholars of the same period would write tiny passages of Jewish law and put them in amulets round their necks to keep the law close to their heart at all times. Medieval knights wore charms for protection in battle. Charms also were worn in the Dark Ages to denote family origin and religious and political convictions.

Charm bracelets have been the subject of several waves of trends. The first charm bracelets were worn by Assyrians, Babylonians, Persians, and Hittites and began appearing from 600 – 400 BC. However, these trends may have started as superstitious means of having or gaining luck or protection. 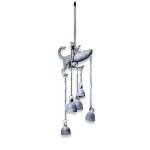 Tintinnabulum depicting a man struggling with his phallus as a raging beast (1st century BC, Naples Museum).

In ancient Rome, a tintinnabulum was a wind chime or assemblage of bells. A tintinnabulum often took the form of a bronze phallic figure or fascinum, a magico-religious phallus thought to ward off the evil eye and bring good fortune and prosperity.

A tintinnabulum was usually hung outdoors (in locations such as gardens, porticoes, houses, and businesses), where the wind would cause them to tinkle. The sounds of bells were believed to keep away evil spirits.