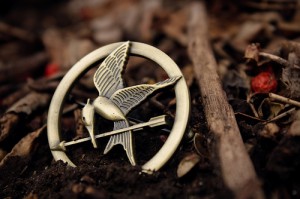 The second installation of the Hunger Games: Catching Fire broke the November box office record with $161.1 million, and is the second highest movie debut this year (after Iron Man III). The films have stirred people all across the world to read the dystopian trilogy by Suzanne Collins. However while the novel itself takes place in the future, many reader and fans are now sensing a relationship between the cruel world of the Capitol and Panem with Ancient Rome. 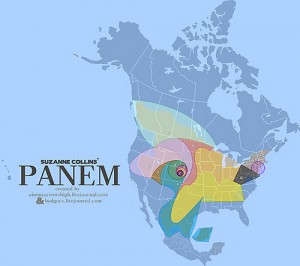 “The trilogy follows the story of Katniss Everdeen, a heroine who voluntarily sacrifices herself to save her sister from a bloody struggle where children must fight to the death in a battle known as the “Hunger Games.”  These games which were instituted to keep the colonies in the empire of “Panem” subservient.”

“In the latest ‘Emory Looks at Hollywood’ episode, Judith Evans Grubbs, Emory Professor of Roman History, looks at the use of violence as a peace keeping mechanism in The Hunger Games series and its roots in Roman culture.”

Some commentators say that the Capitol is reminiscent of Ancient Rome, and the districts of Rome’s colonies or subordinates. The empire, in the series, is called “Panem,” which many find to be ironic since the Latin word panem  means bread and often associated with panem et circenses, or “bread and circuses.” Bread and circuses refers to entertainment and usually the type of entertainment when animals and/or people died in the Colosseum.

The Hunger Games are battles in which children (24) must fight to death facing obstacles of animals and elements; this is extremely reminiscent of the Colosseum battle which included people, animals, and even sometimes naval battles.

Many have viewed the potential uprising of the districts against the capital as a reinterpretation of Ancient Rome and the Christian uprisings. However, the author has yet to officially comment if this is where her inspiration comes from. 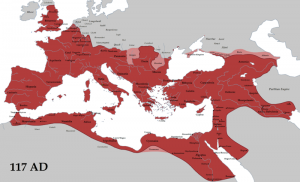 The Roman Empire at its greatest extent in 117 AD

It would appear as well that like J.K Rowling, the Hunger Games author Suzanne Collins has taken inspiration from ancient names both Latin and Greek. Some of the major character’s names are deciphered. and you can read it all here!  From Caesar to Plutarch to even Brutus.

In Panem each district is given a icon which represent their field or production (i.e fishing, coal, minerals, food, etc.). However, the image of the Capitol is as seen below: 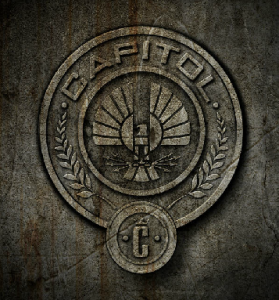 All the districts seals can be seen here. However, this seal of the Capitol greatly resembles that of the Roman Aquila or Eagle.

The Aquila was a prominent symbol used in ancient Rome, especially as the standard of the Roman legion (army). Thus it became a sign of the Roman’s supreme military power( and indirectly of their superior intellect). One can see the similarities between the two symbols from the use of letters (C and SPQR) the use of an eagle, and the leaf crowns or wreaths. 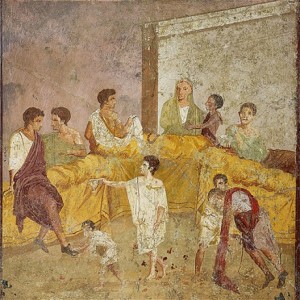 A fresco of a dinner, found in Pompeii. The lower right figure is vomiting and a slave is helping him.

The extravagant lifestyle of the Capitol is the mirror image of the Roman excessive lifestyle. The excessive fashion, brilliant colors (Romans women would dye their hair blues, red, and brilliant blondes), excessive eating and drinking. An exact parallel is the fact the Roman would vomit (or make themselves) in order to eat more at a feast or banquet, which the new film Catching Fire shows as well. However, this last “fact” about Romans making themselves vomit is often mistaken as true; although it is not- many individuals are seen in Roman art vomiting due to excessive drinking NOT for binge eating.

A great articles that deal with the similarities between the Roman Empire and The Hunger Games here.