Learning Latin through Books, Films, and Music. Posted by Brittany Britanniae on Jul 17, 2013 in Latin Language

Today, I am going to talk about Classical Latin within different types of mediums such as books, films, and music. While it is difficult to jump into any language without  knowledge of the language’s syntax or even vocabulary- it can sometimes be helpful to use pop culture to aid in learning a language.

Now, of course, I can recommend books in Latin that were written by Classical authors such as: Vergil, Caesar, Cicero, Ovid, Augustus, Marcus Aurelius, and so on. And, you can read a selection of them here. 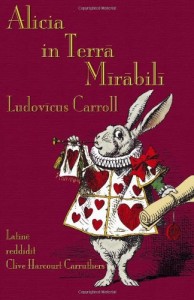 But for modern sources of learning, Amazon has a fine selection of books in Latin that are very enjoyable! These books include Winnie Ille Pu (Winnie the Pooh), Cattus Petasatus (Cat in the Hat) or even the French series (in Latin) Asterix Gallus.

While these book may seem a bit juvenile, they are a great place to start at! But, if you are feeling a bit adventurous you may want to start with: Harrius Potter et Philosophi Lapis (Harry Potter and the Philosopher Stone) or Hobbitvs Ille (The Hobbit).

In the links above, I have provided the small preview that Amazon permits of about six pages of the texts.  Sometimes, it is easier to comprehend the Latin when it is next to an English translation in order to observe the similarities between the languages as can be seen here in this text of Harrius Potter.There is a previous blog post on Latin books in Transparent Language’s Latin Blog Learning Latin by Reading.

Movies in Latin are actually quite rare, but a short list was complied on IMDB a few months ago. An explanation of the movies may be found from clicking on their individual links. The second film on the list is Carmina Burana (which means “Songs from Beuern”) is a compilation by Carl Orff derived from Latin medieval poems.  If you wish to watch the film (and I would recommend at least watching  the first song “O Fortuna” following along with lyrics), I have included it:

Furthermore, it is noteworthy to mention that the films Passion of the Christ and Gladiator (Latin script) were also made/translated into Latin.  Also, some films do include little pieces of Latin such as The Da Vinci Code,  The Godfather, The Sixth Sense, Tombstone and more.

This is a clip from Tombstone. At 1:40, Doc Holiday (Val Kilmer) and Johnny Ringo (Michael Biehn ) exchange conversation in Latin:

Doc Holiday: In vino veritas. “In wine, truth” [In takes an ablative (uino), veritas is nominative/subject, the verb “is” is omitted] English: In wine, there is truth.

Johnny Ringo: Age quod agis “Do! what you do” [ Age is the imperative/command form “Do!”, quod means “what,” and agis is related to Age from the verb ago  meaning “you do” second person singular.] English: Do it then what you do best (drinking)!

Doc Holiday: Credat Judaeus apella, non ego. “Apella the Jew may believe, not I.” [ Apella Judaeus is the nominative/subject meaning Apella the Jew, credit is a 3rd singular present subjunctive form that conveys may believe, non means “no,” ego means “I.”] *Apella the Jew was analogous of an “Average Joe.” English: The Average person may believe that (that drinking is what I do best), but I don’t.

Doc Holiday: In pace requiescat.  “In peace, let him rest.  [In take an ablative (pace), requiescat is the 3rd singular subjunctive, but the subjunctive in this case is hortatory meaning “Let _ rest!; similar to “Let there be light!”] English: Rest in Peace!/ It’s your funeral.

For music in Latin, Ave Marie (translation) is one the most popular songs. I have provided Andrea Bocelli performance at the Colosseum.

Concerning music, there are plenty of genres of music that have lyrics in Latin. Here is a nice complied list of songs, artists, genres, and lyrics. There are previous blog posts with lyrics in Transparent Language’s Latin Blog Music In Latin I & II,

Most of these are classical or religious songs, however there are some artists online who translate contemporary songs into Classical Latin. There is one artist that I wish to spotlight. This artist takes Disney songs and translates them into Classical Latin with  subtitles. This is a great way of learning Latin, since it is with common songs that most people have heard and can be paused and analyzed.

This artist has more videos including: the Little Mermaid, Hercules, Beauty and the Best, Mulan, Brave, Tangled, and the Lion King.

So, I do hope all these resources help and inspire you to continue learning Latin and seeing the connections with English. Feel free to comment and contact me for any questions on translations or sources.