I am so honored and excited to become part of Transparent Language’s Latin Blog. So, allow me to introduce myself. My name is Brittany, but for this blog I have adopted the epithet of “Brittany Britanniae” (which means Brittany “of Britain” and this is the singular genitive form of the feminine noun “Britannia” or Britain). While, I am not 100% British- my family roots are from Britain. Thus, my birth-name Brittany actually means “from Britain.” 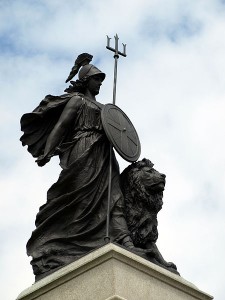 My passion of ancient history and culture derives from my early introduction to it. In the form of myth, movies, and television, the ancient world became alive in my eyes. I am sure many readers can recount films or books that employed redolence of the ancient world that captured their interest. It is this interest and love for antiquity that impelled me to become a Classicist.

My first introduction to Latin was in middle school when my mother taught me a phrase. The phrase was “Semper (sempear) ubi (oobe) sub( sub) ubi (oobe) ”

The following Youtube video pronounces the saying properly if you are having trouble.

Now, this is NOT CORRECT Latin. For your non-Latin speaking friends, this phrase will make them laugh and impress them. They will perhaps even think you are quoting some profound philosopher or politician. However, once you tell them what it means; they will laugh or at least smile.

Semper means “always,” ubi means “where,” and sub is a prefix meaning “under.”

Therefore the Latin “expression”: “Semper Ubi Sub Ubi”  literally means “Always where under where.” Now, in writing this looks and sounds weird, but speaking the expression it sounds like you are saying ; “Always wear under-wear.” Although, it is not true Latin, this is a great piece to teach young kids just to make them laugh and have fun with speaking a “dead” language!

So, from this tiny little phrase and short giggle, a seed was planted that instilled within me to learn and study more. 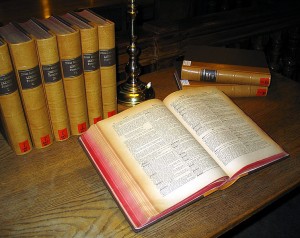 Latin Multi-Volumes,Taken at University Library of Graz. Courtesy of Wikimedia Commons and by Dr. Marcus Gossler

I have been studying the intricacies of Classical Latin for about five years at the University of California Riverside. I have such an appreciation for the logical construction of Latin’s syntax. I have studied ancient Roman authors such as Ovid, Vergil, Sallust, Cicero, Caesar, Seneca and more in the original language. While some people may find these authors and their works boring or mundane; there is such excitement and passion to be held in the ancient world.

For my first post, I would like to translate and share one of my favorite pieces in Latin. It is from the Ars Amatoria by Ovid II.345:

Nothing is greater than custom. 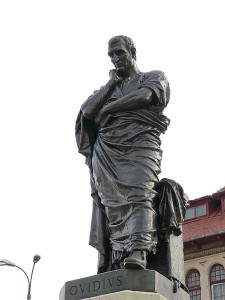 It was important not only to the Romans, but it should be in modern society of maintaining traditions and customs of your family and/or heritage. It is easy, in our fast paced and technology driven world, to forget where we come from and how we move forward to bigger and better things.

Grammar Break Down: Nil simply means nothing and is our nominative or subject. In Latin, often the verb sum meaning to be or est meaning is- it is often omitted/implied. The comparative adjective maius means greater. ( A comparative is a form of an adjective that usually has the suffix “-er” added to the end, so the following are comparatives: prettier, bigger, smaller, luckier. A comparative compares two things:  A is bigger than B.) In Latin, when two objects are being compared using a comparative adjective the second object (or B in the above example) is declined into the ablative form of the noun. The declension for adsuetudine is here. Adsuetudine is the singular ablative form; it is known as the ablative of comparison. So, adsuetudine means custom, habit, customary thing, but due to the fact that this is an ablative of comparison it is translated than custom.

Now, that I have shared my blogging-name’s meaning, my first taste of Latin, and explained one of my favorite Latin phrases. Finally, I wish to share a Latin lesson from a humorous film!

The script may be found here (if their accents are too strong to understand).

* If you are unsure what the Nominative, Genitive, Dative, Accusative or Locative are; you may search for these in the blog for previous informative posts or ask in the comments below.

As my introduction comes to close, I hope that my passion and understanding for this language comes across strong. I am hopeful to write and discuss many topics and ideas within Latin and the Ancient Roman culture. I look forward to questions, comments, and especially those on translation and grammar. Can’t wait to start hearing for you!