The “Most Unpopular” Popular Pet: The Cat (Latin: Feles or Cattus) 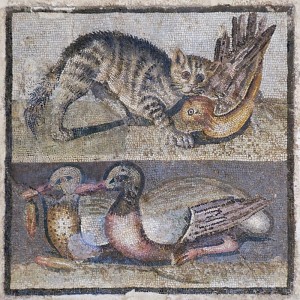 Evidence of the Pet: There are two popular cat mosaics one I provided to the right’ the other is seen under a later pet section. Respectively, the latter is from the House of Faun at Pompeii. The cat as a pet is rarely mentioned (except in the case of a BIG CAT owner- which will be discussed next week). The cat, according to Pliny the Elder, was a practical pet to keep in order to keep mice, ferrets, and moles at bay.

Famous Examples: While not very popular in Ancient Rome, they do have a prevalent presence in Ancient Egypt. Here is an amazing article that examines the feline influence through the ancient world. The cat is often associated with the goddess of freedom, Libertas (for that story- check it out here.) 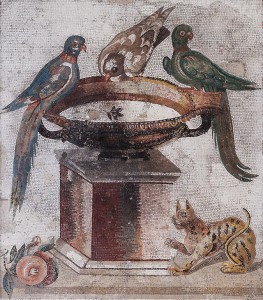 Fun Facts:  I am personally a lover of cats, but apparently they were not popular in Ancient Rome. This may be due to several reasons including the fact that cats are very highly thought of and respected in Ancient Egypt. Perhaps it is this “foreign admiration” that deterred Rome from picking cats as their favorite pet. However, the fact that cats were “unpopular” in Rome does not mean they did not exist. There are a few examples of cats in artwork as I have already listed and provided. Also, this idea that cats are associated with the Roman goddess Libertas or freedom is quite humorous (in my opinion). For any cat owner will tell you that cats don’t listen, care, or really pay attention to their owner unless they have food. They don’t like leashes and are quite “liberal,” “free,” or “independent creatures.”

The Most Beloved Child Pet: The Bird (Latin: Avis) 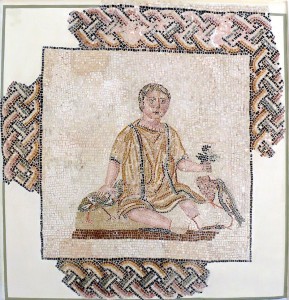 Mosaic from a Roman funerary monument, depicting a young boy sitting, with a fixed glaze; his right hand holds a partridge, his left a bunch of grapes with a thrush pecking at them. Beginning third century Sousse mausoleum. Courtesy of WikiCommons & Ad Meskens.

Evidence of the Pet: There are several examples of birds on gravestones of children, on mosaics, and in sculptures. WikiCommons provides an ample source of references here.

Famous Examples: One only needs to recall Catullus’ poem to Lesbia and her “sparrow.” (I would rather not discuss whether the sparrow is an actual bird or an analogy. For the sake of this post, let’s say it is a bird.) The poem may be found here. Birds were even kept as “pets” by priest who would house them as a tool for prophetic or divine interpretation(this was known as augury). Emperor Augustus launched the fashion of parakeets and ravens who could speak, and used to pay large amounts for such birds.

Child playing with a bird. Marble, Roman artwork of the Imperial era,. Courtesy of WikiCommons & Jastrow.

Fun Facts:  While birds are now thought to be pets that can be slightly dangerous (due to their disease transmission abilities), they are very popular for Romans. Their presence with children and gravestones is quite interesting and may be a literal portrayal or a symbolic one. For an analysis of the gravestone bird presence; check here. 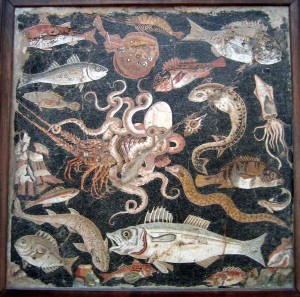 An array of creatures that may have been found in a “piscine.” Sea creatures mosaic from Pompeii; National Archaeological Museum of Naples, Italy. Courtesy of WikiCommons & Massimo Finizio.

Evidence of the Pet: There are several examples of fish on mosaics. Varro even records good habits to maintain while providing and caring for fish; which can be seen here. In addition, evidence of piscina (referring to fish ponds or swimming pools) have been found. More on the structure, habitats, and history of piscine may be found here.

Famous Examples: While it may be unclear which fish were kept by Romans; what is clear is that like today- they were easy pets to maintain. However, the more exotic the fish (saltwater vs. freshwater) the more difficult to maintain. Famously, Augustus’ nephew, Hirrus, was noted to owning and keeping extravagant fish ponds.

Thus Hirrus, who, on one occasion, lent Caesar 6,000 muraenae, at a subsequent period obtained 4,000,000 of sesterces (upwards of 30,0001.) for an ordinary villa, chiefly in consequence of the ponds and the quantity of fish they contained. (Greek & Roman Dictionary; here) 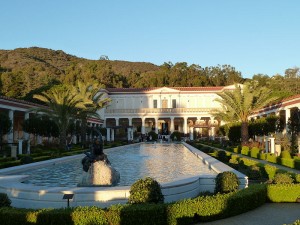 An example of a piscine as reconstructed at the Getty Villa. Courtesy of WikiCommons & Dave & Margie Hill / Kleerup .

Fun Facts:  Quintus Hortensius, a Roman orator, is said to have mourned the loss of his pet fish as if a person- or family member- had died. Historians are quite sure that while fishes were kept as pets; they were never used for the famous condiment known as Garum. This obviously makes sense since even farmers who raise pigs, cows, etc. have a difficult time (if they are able to at all) to eat their livestock if they treat them more like pets.

The Most Popular Pet: The Dog (Latin: Canis) 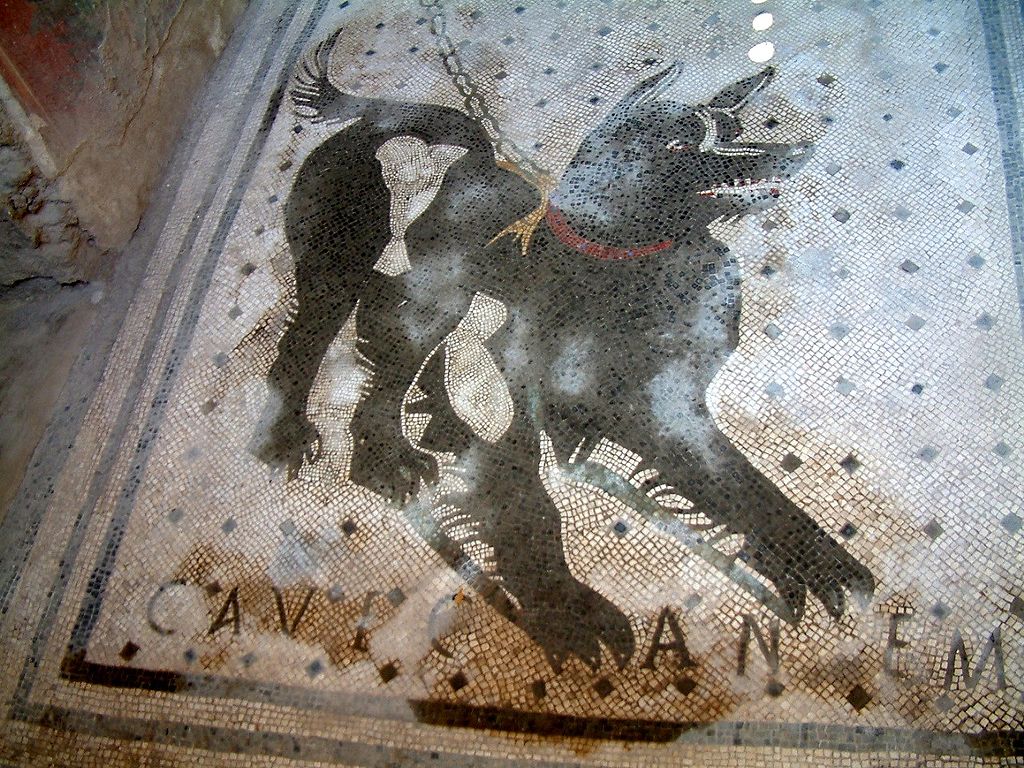 CAVE CANEM “Beware of Dog!” Mosaic. Courtesy of WikiCommons & Radomil. For more on this piece: here.

Evidence of the Pet: The evidence for the popularity in dogs is the same as the other pets listed above: artwork, literature, etc. However, the reason I would argue that this pet was the most popular is the undying terminology of “Man’s Best Friend.” One fine scholar examines the dogs role (including the lap-dog) in the Classical Journal: here.

Famous Examples: The most famous examples have been provided in the images in this post. The “Beware of Dog” mosaic and the gravestone of Helena. 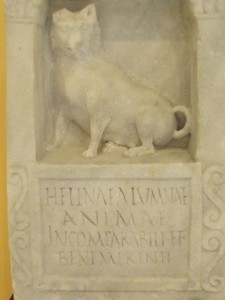 Fun Facts:  The name “Fido” has often been coined as a popular name for a dog. The name actually comes from the Latin word Fidus meaning faithful, loyal, trustworthy. This common name shows a nice parellal that cats (libertas) and dogs (fidus) have.  The blog has also written a whole article dedicated to this gravestone of Helena, which can be read here. Also, the following page (here) has a sundry of artworks, coins, and descriptions of dogs as pets. This of course outweighs and outshines previously mentioned pets; thus, this confirms my statement that dogs were the “most popular pets.”