The Festival Even the Romans Forgot Posted by Brittany Britanniae on Jul 13, 2016 in Latin Language, Roman culture

Salvete Omnes! I hope everyone is well. This past week of July, or “Iulius”, was quite a busy one for the Ancient Romans. 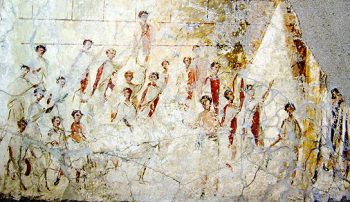 A painted depiction of Roman men wearing togae praetextae participating in a religious ceremony. Fresco on a building outside Pompeii. Courtesy of Wikimedia Commons.

Starting on July 5th, we had the festival of Poplifugia, followed by the eight or nine day feasting of the festival of Ludi Apollinares, (“Ludi” = solemn games, “Apollinares” = honoring Apollo).
During this week-long festival there were a few other festivals as well, as it seems there were simply never enough festivals.

It is perhaps not a surprise that, with the bustle of all these festivities, one of these days of feasting, drinking, and celebrating might have lost its originating story.

The day that even the Romans of the Late Republic scratched their heads at, trying to remember what they were commemorating, was the festival of Poplifugia on July 5th.

The word “POLIFVGIA” was written in all capital letters on the Roman calendar, indicating it was a significant event, despite the social amnesia. 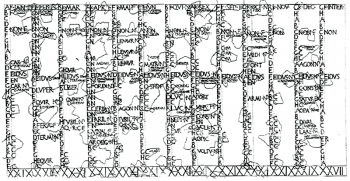 A pre-Julian Roman calendar found in the ruins of Nero’s villa at Antium (Anzio). Courtesy of Wikimedia Commons.

There are many different theories about the origin of the Poplifugia festival, but none are known for certain.
Historians have been left with little else but the name of the festival and have looked for clues in the one Latin word: “Poplifugia”.
“Popli” refers to “people” and “fugia” would refer to the verb to flee, “fugerit”.

This would mean the festival would have something to do with “The Flight of the People”.  But what could these hypothetical people be fleeing from?

Here are 3 of the theories historians have proposed to solve this ancient mystery:

“… such as the Ficuleans and Fidenians and other neighbors, [who] conspired against us. Some vestiges of the flight of this day appear in the rites, about which matters the Books of the Antiquities have more to report.” 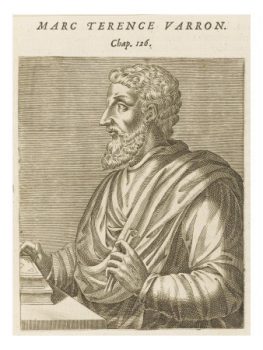 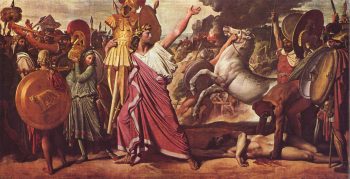 Romulus, portrayed here as Victor over Acron, hauls the rich booty to the temple of Jupiter, by Jean Auguste Dominique Ingres (1811). Courtesy of Wikimedia Commons.

3. Another possibly clue of the name “Poplifugia” is that it is in the plural form. The name of the festival Regifugium (“King’s Flight”), another festival about a flight that you can learn more about here, is in the singular form. The plural form of “Poplifugia” denotes that perhaps there were once multiple days of celebration.
Some historians believe that perhaps the second day of the Poplifugia festivals, believed to be July 7th, was to celebrate the victory following the retreat of the Romans. This celebration might have been overshadowed by or incorporated into the festival of Nonae Caprotinae.

Still shrouded in mystery, this scenario serves, if nothing else, as a great example of just how crucial an understanding of Latin is to the investigative historian!