The History of Kissing: The Ancient Roman Fascination Posted by Brittany Britanniae on Feb 8, 2017 in Latin Language, Roman culture

Salvete Omnes! With February starting up some of us might be thinking about that infamous day of love, St. Valentines Day. Whether or not we are looking forward to it, forgetting it, or ignoring it, let us take a look at one of the romantic activities that fascinated the Ancient Romans. 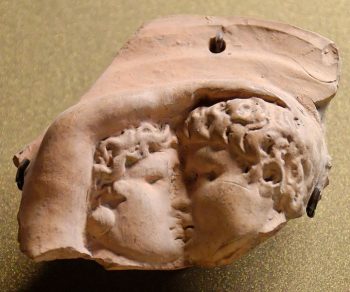 Every culture in any point of time has its own language of love. Be it platonic, familial, or romantic love every culture has a code of conduct and a shared understanding of how to exist in the personal space of loved ones. For the Ancient Romans, one method of displaying affection that we recognize as well is the act of kissing. In fact, the Ancient Romans were fascinated with and, perhaps, fixated on the kiss or oscula.

Think too hard about it and the act of kissing and its history is rather mysterious and strange. As we look at how Ancient Romans used their lips to communicate different sentiments in different situations, it can make us begin to question our own cultural code of conduct around kissing. We know, of course, that kissing was an act between lovers, as it almost exclusively is today, but there were many other situations where a kiss was no only socially acceptable but recommendable.

Greetings on the Lips:

Ancient Romans probably had very little regard for personal space since one way that social equals, usually those we would consider aristocrats, would greet each other on a daily basis would be with a kiss. Family members would kiss when meeting, brothers, friends, and even boxers and wrestlers would touch lips. It was a show of gratitude, reinforced friendship, and was an appropriate display of “salutatio” between clients and patrons. It was also a sign of closeness between masters or teachers and their pupils, though there were times in history when this was discouraged because of the ambiguous nature of kisses and appropriate intimacy between masters and pupils.

The kiss of greeting was perhaps the most common form of kissing, if only because an Ancient Roman might meet many family members, friends, equals, and partners in business in a day. When there was a contagious disease making its way across the city kissing was something considered so prevalent that measures would be taken to forbid kissing between aristocrats until the sickness passed. 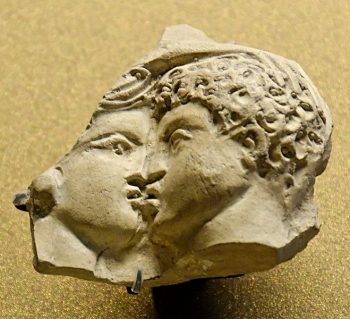 One of the very clear rules about kissing was that it was a privilege to greet members of your family group with a kiss. This rule was not to be broken or followed incorrectly. For the kiss to be socially acceptable the two have to be of the same “propinqui” in a broad sense. In one of the stranger chapters of Plutarch’s Roman Questions he answered the question, “Why do the women kiss their kinsmen on the lips?” This, indeed, must have been a question for anyone on the outside of Roman culture.  One reason Plutarch provide might be so that the male relatives can detect whether or not their female relatives have been drinking wine when it was forbidden to them. Overall, though, Plutarch leaves the impression that a kiss between family members was simply a token of kinship.

Lucius Paulus once wrote about the joy of returning home to his children and how they would “race to win the first kisses”. In only some cases would a family friend be allowed to kiss the children of a family. Such as in the case of Frontos, Marcus Aurelius’ master, who kissed the hands and feet and Marcus Aurelius’ baby daughters. However, there was one family relative that was not to be kissed: the grown, marriageable girl. Although kisses within the family were, of course, seen as platonic there still seemed to be concern about sullying a young girl’s reputation with an inappropriate kiss from, perhaps, a distant family member.

The people who could touch an Emperor’s lips was a highly watched and judged list of citizens. Typically, emperors, like other Romans, could kiss and be kissed by family members. One scandalous story was Agrippina’s use of her right to “ius osculi” with her uncle, the emperor Claudius, to remain close to him and seduce him. A few intimate friends would be allowed to kiss the emperor, as well, but only a few. However, an emperor that kissed no one was seen as strange and cold. An emperor who kissed everyone, like Caligula and his infamous kiss with the player Mnester, were seen as unruly and disrespectful to their station.

Kissing the Neck and the Eyes:

Perhaps strange to us, it was common for Ancient Romans to kiss closed eyelids and the side of necks. This is not something we haven’t seen before, but it was something that was not limited to lovers. It was common for friends to kiss each others’ eyes or necks (and the mouths). It was also customary to kiss the necks of your parents or grandparents.

As Christianity took root in Ancient Rome, the act of kissing became even more ambiguous. Although the “kiss of peace” and “kiss of charity” and “Judas kiss” were initially acceptable between men and women and the greeting kiss for widowed women were a sign of respect. Kissing, however, would ultimately more discouraged than it was in the rest of Roman society, in case it awoke any carnal desires.

The Ancient Romans, no strangers to intimacy, might have had some interesting cultural rules for kissing, but it is but another window into seeing the daily life, concerns, thoughts, and joys of an Ancient Roman’s life.