The final compilation of the scandalous women from Ancient Rome. Enjoy! 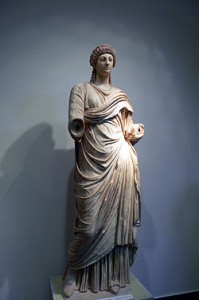 Statue of Poppaea in the Archaeological Museum of Olympia (Greece). Wikicommons.

Prime Examples: Poppaea was said to have married her second husband,Otho, in order to seduce the Emperor Nero. Ironically, she divorced her husband Otho in order to marry emperor Nero, but Otho would briefly be emperor after Nero’s death. She became the emperor Nero’s mistress and persuaded Nero to murder his mother(Agrippina the Younger), who forbade their marriage. Before marrying Nero, ancient authors also accredited her to inducing Nero to murdering his first wife: Octavia Claudia (emperor Claudius’ daughter). If you wish to learn more of her life visit here.

Ergo:  Poppaea places 3rd on her list for her manipulation of men to pursue power. Poppaea has been recorded by several authors to have been ruthless and ambitious. It has been said that she was murdered by Nero either by poison or by assault. Authors attest that, while pregnant, Nero kicked her in the stomach causing death. Other authors say, she simply died due to complications of a miscarriage. 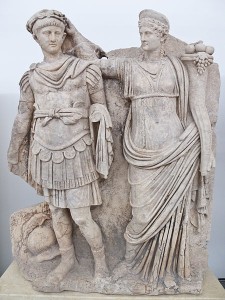 Weakness: Her Son, Her Daughter in Law (Number 3 on our list )

Prime Examples: Emperor Caligula (brother to Agrippina)was a crazy ruler who was said to have had incestuous relationships with his sisters. She murdered her second husband, Gaius Sallustius Crispus Passienus, in order to obtain his estates and inheritances. When her uncle emperor Claudius executed Messalina, Agrippina saw her opportunity to become empress. She became the mistress to one of Claudius’ advisers, Marcus Antonius Pallas, in order to persuade her way to royalty. Claudius and Agrippina married and removed everyone that stood in her or her son’s, Nero, path to power. She managed to have Claudius adopt Nero as his son and for Nero to marry Octavia Claudia ( Claudius’ daughter.) Lastly, she may have had in hand in the death of Britannicus (Claudius’ son and heir) who Nero succeeded for the throne. She employed the infamous poisoner Locusta to murder Claudius and give her son the Roman empire. More can be read on her here.

Ergo: Agrippina is places second on this list for willing to seduce for power even if it means committing incest (both with her brother Caligula and her uncle Claudius) , her employment of a poisoner to remove people from her way, and for the murder of her uncle/husband Claudius and his son Britannicus, her cousin. However, she was murdered by Number 3 on our list: Poppaea Sabina. 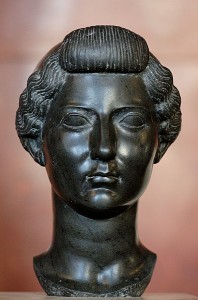 Portrait of Livia in Egyptian basalt, c. 31 BC, Louvre. Wikicommons

Prime Examples: Livia was the second and last wife of emperor Augustus. She met Augustus while still married to her first and pregnant with her second child. The meeting was said to be “love at first sight” which caused Augustus to divorce is wife. He was so in love with Livia that he divorced his wife on the very day she gave birth to only child: Julia the Elder (Number 7 on our list). He, also, forced Livia’s husband to divorce her and married Livia only three days after she gave birth to her second child: Drusus (Claudius’ father).This rush to be married was unconventional for the time and only further implicates her seducing nature. Furthermore according to the historians Dio, Suetonius, and Tacitus, Livia was responsible ether directly or indirectly for the deaths of several of her family members. She is reported to have murdered Marcellus(Augustus’ nephew and first adopted son), and Gaius and Lucius Caesar ( Augustus’ grandsons and adopted sons). It is believed she murdered these young men (respectively: 21, 16, 15 years old) so that her own son Tiberius (from a previous marriage) would be emperor.  Lastly, she is reported to have killed her husband, Augustus, of 51 years by poisoning his fig trees which he grew and ate from. You can read her more on her life here.

Ergo: Livia places first on our list for good reason. She murdered several people including her husband in order that her son may be emperor. She was perhaps a blueprint for Agrippina the Younger (#2). Disregarding all her faults, historian do attest that she was loyal, proper, and chaste.