The list of infamous, scandalous and plotting women continues to countdown…

Prime Examples:  Julia the Elder was the daughter of Emperor Augustus. According to Dio and Seneca, although married to Tiberius (who would be emperor after Augustus) she reveled in drinking parties, many love affairs, and even prostitution. This promiscuity was especially scandalous due to her father’s Leges Juliae (Julian Laws) that promoted family units, children, and marital loyalty.  The fact that his own daughter was breaking these laws was unforgiveable. Pliny states she had affairs and plotted in public; “adulterium filiae et consilia parricidae” “adultery of the daughter and the plan of patricide.” You can read more on her life here.

Ergo  Julia earns number 7 for her crimes against and humiliation of her husband, father, and empire. All her deeds must have been true, because she was exiled for them, banished from her family, and eventually starved to death. However, her loveless marriages may have caused this outcry for love and attention. It is difficult not to pity the woman, even though scandalous. 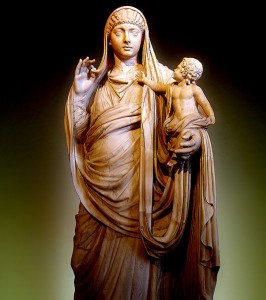 Prime Examples: Messalina was the wife of Emperor Claudius. Although she was the most powerful woman in Rome, she sought to overthrow her husband and rule with her lover. Messalina is infamously known for her clandestine affairs, but most notable for her all-night sex competition against a prostitute. According to Pliny, Messalina won the 24 hour competition with 25 partners. She also humiliated Claudius by marrying her last lover: the intelligent and handsome Gaius Silius. Gaius and Messalina had planned to overthrow Claudius and rule together, but their plan was exposed. You can read more on her life here.

Ergo: Messalina earns number 6 due to her similar nature to Julia the Elder, but the fact that she was plotting against her husband. As punishment her name was removed from all monuments, honors and  was sentenced to death. She betrayed not only her husband, her children, but also Roman women. 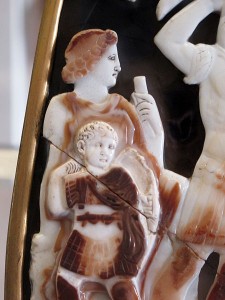 Woman on the Great Cameo of France who may be Livilla. Wikicommons

Prime Examples:   Livilla was the daughter of Antonia and sister to Claudius. She was reported to be a beautiful, but sharp woman. She once laughed hysterically at the prophecy of Claudius being destined to be emperor. She took on one lover, a praetorian prefect: Sejanus. With her lover Sejanus, they murdered and poisoned her husband Drusus. Once Drusus was gone, she and Sejanus attempted to marry, but Emperor Tiberius would not comply. Tiberius eventually suggested that Sejanus could marry Livilla’s daughter Livia Julia. Eventually, Sejanus’ ex-wife told the emperor of  Livilla’s and Sejanus’ plan to overthrow Tiberius and rule Rome. You can read more on her life here.

Ergo: Livilla places number 5 on our list due to her murder of her husband for her lover. She places fifth for murder, treason, and want of power. Livilla, although selfish and vain, was upset at the pretense of Sejanus marrying her daughter even as a formality. Livilla’s death was a treacherous as her life; she was held captive in a room while her mother stood outside it and allowed her to starve to death. 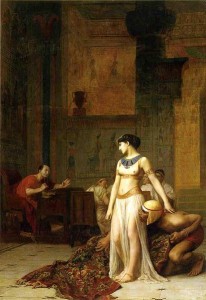 Prime Examples: Cleopatra was exiled from her reign, power and home in 48 BCE. She supposedly met Caesar (already married) , seduced him and bore his son. Caesar renstated her as queen of Egypt and she murdered her brother (in the siege of Alexandria) and order her sister’s death as well. When Caesar died unexpectedly, Cleopatra did not give up on her power or prospects for her children. She seduced, married, and started a family with Marc Antony (who was already married). After the defeat at Actium, Antony committed suicide at the news of Cleopatra’s death. Cleopatra later would attempt to seduce Augustus in hopes of securing another powerful married Roman man.  You can read more on her life here.

Ergo: Cleopatra places number 4 due to her willingness to kill her siblings for power, seduce married men, excessive shows of luxury to intimidate, and her suicide to preserve her pride. She was an infamous woman of her time and is still to this day synonymous with “seducting for power.”