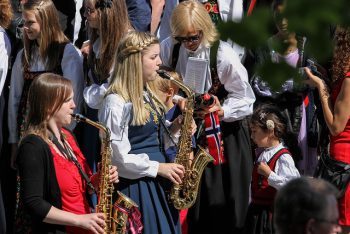 (Photo courtesy of Bard Skar at Flickr, CC BY 2.0 License.)

Gratulerer med dagen, Norge! (”Congrats with the day”, Norway!) It’s syttende mai [May 17th] again, and Norwegians all over the world are rejoicing and celebrating their nasjonaldag [nashoNAALdaag]. A 17. mai spent in a Norwegian bygd (village/town) or by (town/city) is a great experience, so for those of you who haven’t got that opportunity, here’s a breakdown of the day…