Most Norwegian Words Posted by Bjørn A. Bojesen on May 31, 2018 in Norway and the world 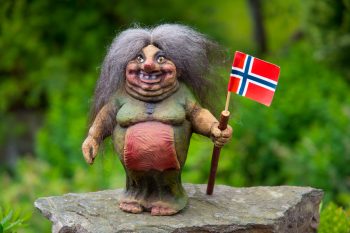 Which words are the ”most Norwegian”? Of course, such a spørsmål (question) is very hard to answer… Besides, there are so many words to pick! Here are my (current) candidates for the prize – do you (dis)agree?

fjord [fyor] (fjord). The beautiful fjords only exist in a few countries (Norway, NZ, Chile and a few more). If you only go to Norway for the mountains – why not Switzerland instead?

fjell [fyell] (mountain/s). Norway is almost unimaginable without mountains. Den norske fjellheimen (the Norwegian ”mountain home”) is the totality of Norwegian mountains, perceived as a realm of its own.

snø [snur] (snow). Even in days of climate change, Norwegian winters are usually white. There’s a reason Norway always gains a ton of medals at the Winter Olympics…

ras (avalanche). Norway is a country of wild energy, and both steinras (rock avalanches) and snøras (snow avalanches) take place, now and then.

hytte (hut, cabin). Having a primitive AND well-equipped hytte in the mountains is kind of the Norwegian dream… 🙂

kos (”cosiness”). The Norwegian way of having a pleasant time in each other’s company. Så koselig! (How cosy!)

bunad [boo-nahd]. The national costume comes in many regional varieties. 17. mai, the day of the constitution, is the day to wear it.

dugnad [doog-nahd] is a special concept, that I only know from Norway. It basically means helping each other in the local community in order to get something done – for example painting a local school. Society is the big winner, so everybody works for free.

ski [shee] is a word Norway gave to the world. Nobody beats Norwegians when it comes to skisport.

troll – is there anything more Norwegian?

tull (rubbish, nonsense). Not everything needs to be serious. Tull is the antidote! 🙂

dritkul is a word known by many foreigners because of the tv series SKAM (”Shame”). It’s a piece of slang literally meaning ”sh*tty cool”.