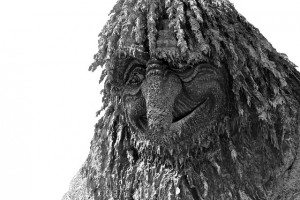 A real Norwegian troll from the Hunderfossen amusement park in the Lillehammer area. (Photo courtesy of Jan Hammershaug at Flickr, CC License.)

Turister (tourists) never seem to tire of troll (trolls), so I hope you won’t mind yet another look at Norge’s most popular inhabitants. 🙂 As I recently had the fun task of doing some troll research, I thought I’d share a few fakta (facts) with you:

1. The first troll in history was Norwegian and female. She appeared in a norsk skog (Norwegian wood) in the 800’s, challenging the Viking poet Bragi to a gammeldags (old-world) kind of rap battle. Bragi made the best dikt (poem), and was allowed to escape without the troll killing him…

2. Originally trolls existed only in Skandinavia. England had goblins and many other creatures, but no trolls. The Norwegian word troll entered English only after the folkeeventyr (folk or fairy stories) by Asbjørnen og Moe had been translated (19th century). The 3 Billy Goats Gruff (De tre bukkene Bruse), for example, was a huge hit, and the Norwegian trolls went viral in Britain and the US! 🙂

3. I middelalderen (in the Middle Ages), laws from Bergen and Oslo prohibited the ”awakening of trolls”. If you went ut i naturen (into Nature) to ”wake up” a troll, everybody knew you were the enemy of kirken (the Church). With such skills, at least, you could not be a normal menneske (human being).

6. If you’re attacked by a troll, the best way å overleve (to survive) is to keep talking! Trolls are not too clever. In the story ”Askeladden som kappåt med trollet” (Askeladden who had an eating contest with the troll), the boy Askeladden convinces the troll that stabbing yourself in magen (the belly) is a great way to renew your appetite…

7. Troll er nattaktive (trolls are active at night). Keep entertaining the troll till soloppgang (sunrise), and it will turn to stein (stone)!