Norwegians are generally in great shape! Posted by kari on Sep 15, 2010 in Culture, Nature, Traditions 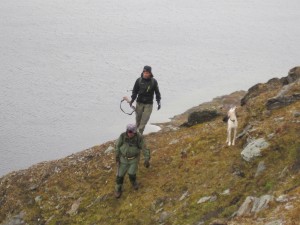 The jakttur (hunting trip) that I just returned from has confirmed my belief that nordmenn are generally in very good shape.  This tur is an annual tradition for this group and most of the guys hike around their hytter (cabins) or gå på ski (ski) or some other activity, but several of them literally don´t engage in any other serious physical activities all year round (or are even overweight).  But, to my surprise, it apparently doesn´t matter!  They can hike up and down mountains just as well as my friend and I who are young and in fairly good shape! 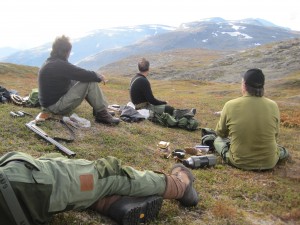 The first day we walked about 3.5 hours up some pretty steep terrain at the beginning of the fjell, and then some more to get over the fjell and down to the hytter.  I don´t think anyone drank vann (water), but rather a handful of pils and maybe a couple shots of Jægermeister.  I heard a couple moans and groans, but not as much as I would have thought for old, stiff, and dehydrated men!

The second day på fjellet we were out for 10 hours.  Sure, there were breaks to ete litt (eat a bit), drikke noe (drink something), snakke om vi hadde sett ryper og hvor (talk about if we had seen grouse and where), og kvile (rest).  Even so, I was very impressed at how everyone managed to hike around fjellet for so long with heavy ryggsekker on some pretty steep terrain. 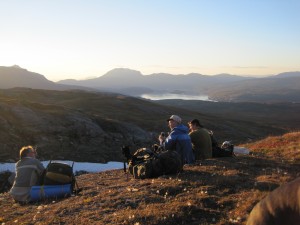 After one of the guys got taken by helikopter from the jægerghytte to Harstad, his ryggsekk with all of his stuff was still there.  One of the guys som hadde ikke gått på jakt (hadn´t been hunting) for 25 years and hadde ikke gjort noe fysisk (and hadn´t done anything physical) for a year was nice enough to take the other guy´s ryggsekk down the mountain to him. But that wasn´t his only reason to go down.  Han var fri for røyk og rødvin (He was out of smokes and red wine) and couldn´t manage to be there without those 2 important items.  So he took the ryggsekk down, kjøpte røyk og rødvin, and walked back up, all in one day!!  And didn´t complain about it at all.  It was no big deal, just 5-6 hours for some cigarettes and wine.  🙂

I guess it´s the centuries of life in the mountains that created incredible endurance and stamina to survive på fjellet.

That day that he walked down the rest of us were out for another 10 hours.  The 4th day maybe 6 or 7 and the 5th day my friend and I walked down and used about 2.5 hours.  There were still a couple left up at the hytte that were going to hunt one more day.  Most of them are going up this coming weekend too!