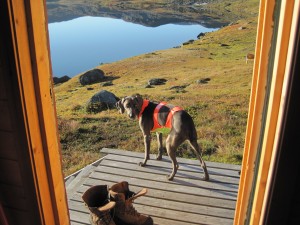 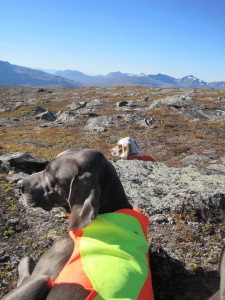 I have recently gotten back from my first jakttur (hunting trip) and could not have had a better time.  Although I didn´t have a hagle (shotgun), it was an absolutely incredible experience just to be there.  I was more of a spotter 🙂  We were hunting for fjellrype (mountain grouse), which are very well camoflauged with the gray mountainous background, so keeping one´s eyes peeled is very important.

We took off on Thursday afternoon with a group of 8 of us (me, my friend who is in his mid-20s like myself, and 6 men in their 40s and 50s, one English Setter and my dog Stella, a Weimaraner).  I guess it took us about 4 hours to hike up to the Salangen Jeger og Fisker Forening hytter (Salangen Township Hunter and Fisherman Club cabins).  There were many pauser (breaks) to rest our legs and drikke pils 🙂  Those who think ahead drive up refreshments and non-perishables via snyscooter (snowmobile) during the winter so their ryggsekker (backpacks) aren´t so heavy.  We didn´t do that, so ours were heavy.  But it is important to have enough rødvin and pils for the tur.  In fact, one of the guys ran out of rødvin and røyk (cigarettes), so he actually walked down, purchased more goods, and walked back up-took a whole day! 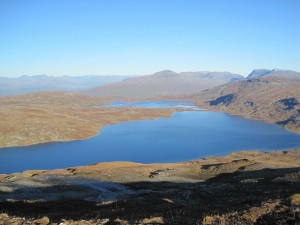 Once we got up, it was relax to the max in the evening, and walk for miles and miles all day long.  I think the first and second day we were out for 10 hours each and the third day 6 or 7-kjempegod trening (very good exercise)!  I haven´t been hiking in the mountains for nearly 10 years, so it was certainly litt tungt (a little tough-heavy), but felt great 🙂  We took plenty of pauser to refuel with brødskiver, nøtter og sjokolade (nuts and chocolate), and te (tea) or kaffe.  There are bekker (creeks) all over so it was no problem to find clean drinking water-especially for the hunder (dogs).  They got treated to pølser (sausages) with high calories especially made for hunder. 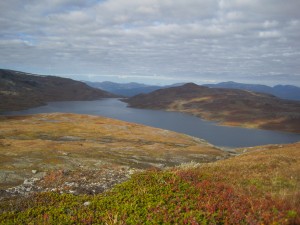 My dog, aweimaraner- the world´s oldest breed of bird hunting dogs-was not interested in finding fuglene (the birds) like her new friend Freia, the English Setter.  I´m not sure if Stella was too old to lære å gå på jakt (learn to go hunting) or if her sense of smell isn´t as good as it used to be, but she couldn´t seem to do the job she was made for.  It was cool, however, to see Freia ta stand (take stand), her owner skyte en rype (shoot a grouse), and Stella apportere den (retrieve it)-bra samarbeid (good cooperation)!  I swear that Freia ran and ran 10 times as far as we walked.  I don´t know how those dogs do it! 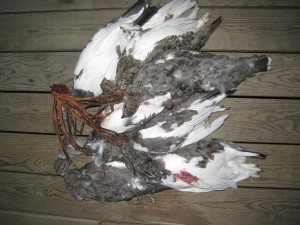 In total, we got 17 rypa, more than enough to feed us all on Saturday night when we had a fantastic rypemiddag (grouse dinner) with poteter, grønnsaker (vegetables), tyttebær (cloudberries), and the most amazing cream sauce with Pakistansk krydder (spices) ever-and lots of rødvin 🙂  For a midnight snack afterwords, one of the guys fried rypelår (grouse thighs) that were better than any chicken thigh or drumstick that I have ever had, UTEN TVIL (without a doubt)!  Oh and before rypemiddagen we enjoyed an assortment of tørkede, saltet, og røyktdried (dried, salted, and smoked ) meat, including reinsdyrhjerte (reindeer heart), havørret (sea trout), skinke (ham), and hjortebiff (deer steak).  Let´s just say we didn´t go hungry.  I´ll also say that we deserved it! 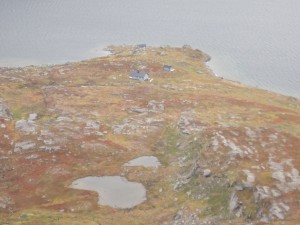