This day in Norwegian history Posted by Bjørn A. Bojesen on May 17, 2017 in Uncategorized 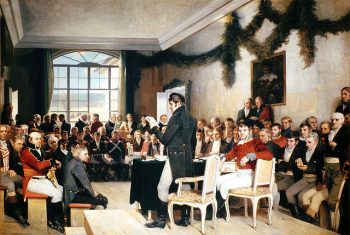 Gratulerer med dagen! It’s 17. mai again, Norges nasjonaldag (Norway’s national day). This time, let’s celebrate by taking a look back at how it all started…

Many foreigners think that 17. mai is Norway’s independence day – which is only partially true… What is being celebrated is actually Norway’s grunnlovsdag (constitution day), the day the nation got its own grunnlov (literally “ground law”). It’s the day the country got its own driving licence, so to speak – but was only allowed to take a short ride in the car.

On May 17th 1814 [attn fyortn] 112 men from various places in Southern Norway solemnly accepted the Constitution in Eidsvoll, a bit to the north of Oslo. Eidsvollmennene (the Eidsvoll men) had been working on the draft for weeks. Det var et stort øyeblikk for Norge. (It was a great moment for Norway.)

For the first time ever, Norwegians had defined for themselves which kind of country they wanted to live in. Compared to other European constitutions in 1814, the Norwegian one was really freedom-loving and ahead of its time. (Still, there were some quirks. People who were younger than 25, not male, and not members of the most “in” and wealthy groups, could not vote. Also, for a long time, the grunnlov did not allow Jewish people to visit Norway.)

So, why did these 112 men all of a sudden decide to sit down and write a constitution? And why wasn’t Norway fully independent? Let’s take the whole story in a few points. 🙂