Different sharks species in Polish Posted by Kasia on Jun 25, 2021 in Nature, Vocabulary

My daughters absolutely love sharks! All different species of sharks! And when there is shark week on tv, they can watch it all the time. Do you know most common shark names in Polish? If not, this post is all about them:)

Sharks are among the largest types of fish that inhabit the oceans. Species of sharks (gatunki rekinów) such as the whale shark, basking shark, and great white shark can outsize other fish by many meters, but some of the sharks are quite small species of fish. Most types of sharks are fearless hunters that top of the oceans’ food chain (łańcuch pokarmowy oceanów).

Lets take a look at some of the most common sharks! 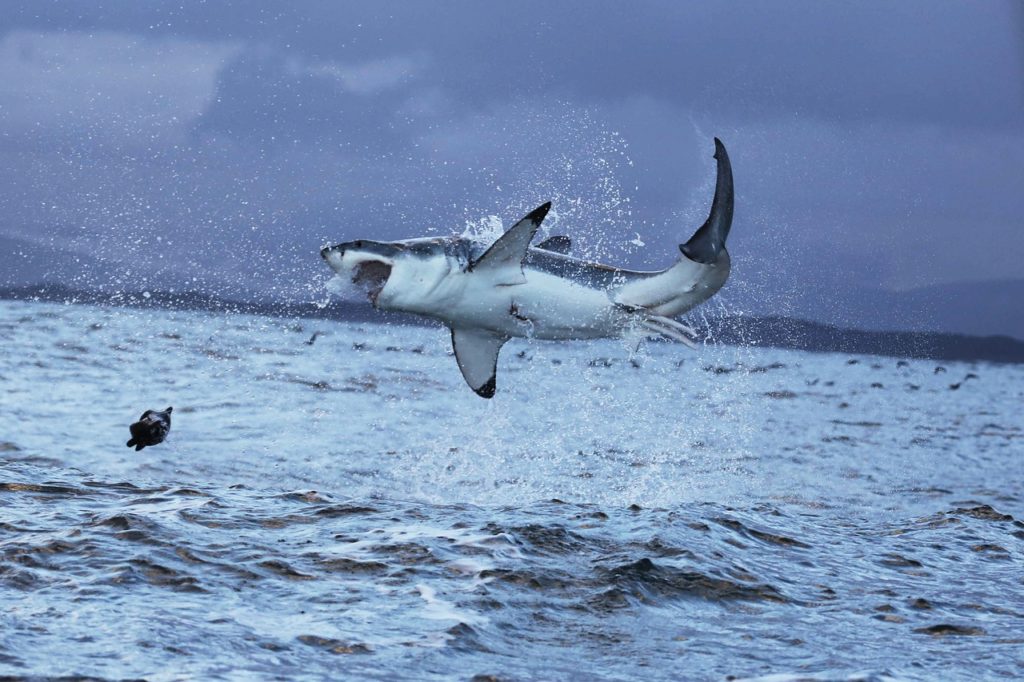 The scientific name of the great white shark literally means “sharp or jagged tooth” (ostry lub postrzępiony ząb). When you look at the pictures of large great whites, it is easy to see how they got their name. An adult shark can grow up to 20 ft. (6 meters) in length and weigh 4,200 lb. (1,905 kg). They have a pointed nose (szpiczasty nos), gray upper body (szara górna część ciała), and white underbody (biały brzuch). Great whites have a large dorsal fin (płetwa grzbietowa) and a large triangular caudal (rear) fin (trójkątna płetwa ogonowa (tylna)). 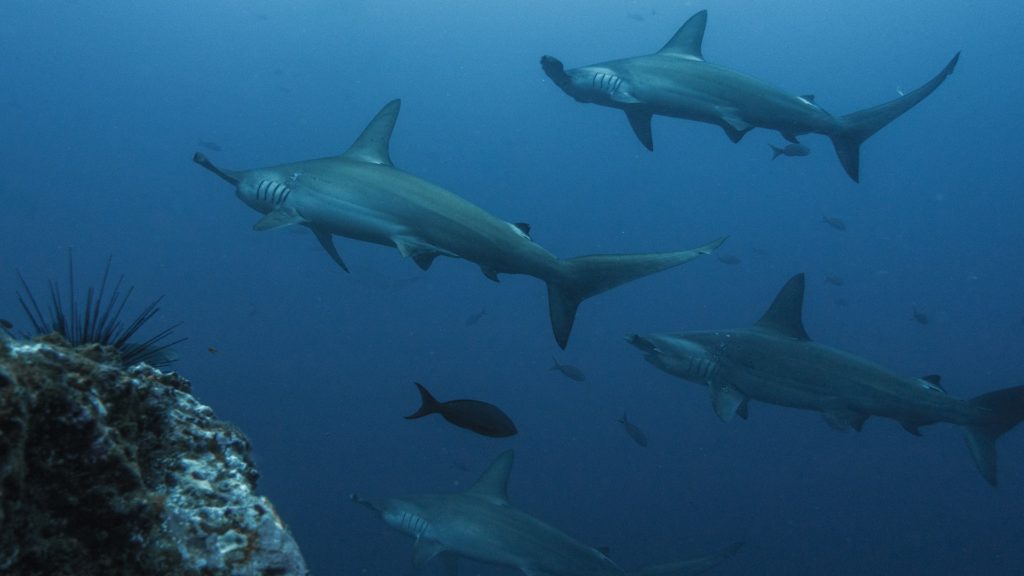 It is not difficult to see how hammerheads get their common name. There are 9 species of hammerhead sharks, all with flattened heads in the shape of a hammer or mallet (spłaszczone głowy w kształcie młotka).

The great hammerhead shark can be up to 20 ft. (6 meters) long. Hammerheads are a type of ground shark and tend to swim on ocean floors (dno oceanu). There they feed on squid (kałamarnica), fish (ryba), and octopus (ośmiornica). They use their unique heads to “hammer” stingrays (płaszczki) before eating them. 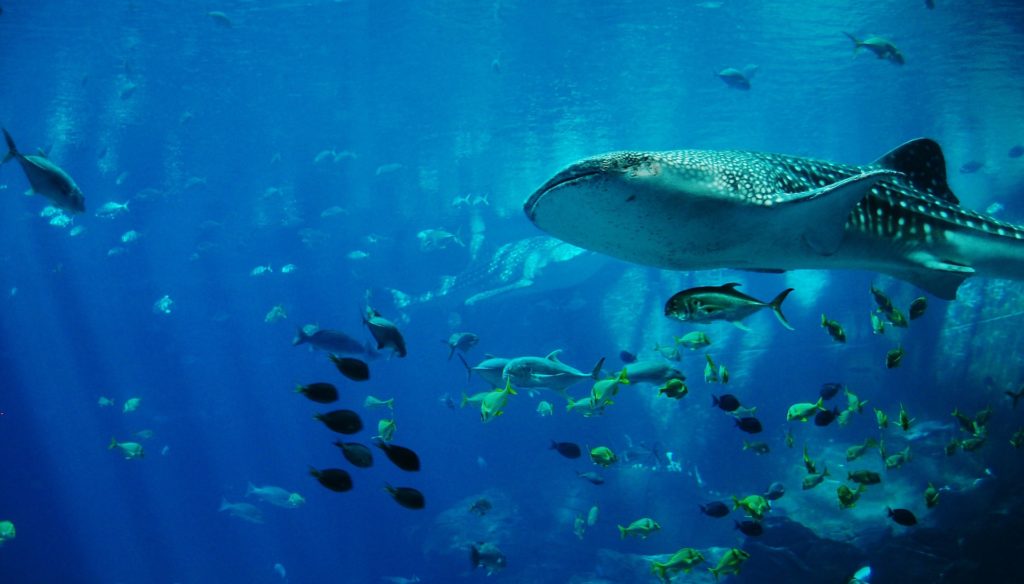 The name of this species of shark gives you a clue to its size. The whale shark is the largest shark species alive today with the largest recorded specimen being 62 ft. (18.8 meters) long!

They are also classed among the filter feeder sharks. They swim with their huge mouths open gathering plankton (plankton), krill (kryl), and small fish (małe ryby) in its mouth. 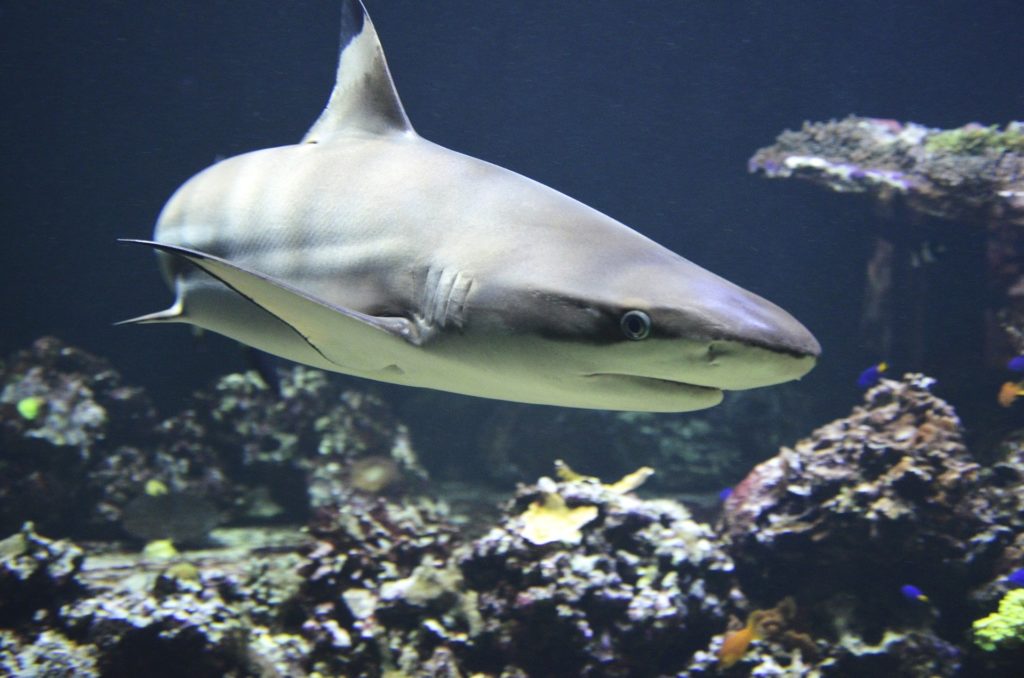 It is easy to identify the blacktip reef sharp due to the black coloring on the tips of its fins. These sharks are found swimming in tropical reefs and inshore waters (tropikalne rafy i wody przybrzeżne). 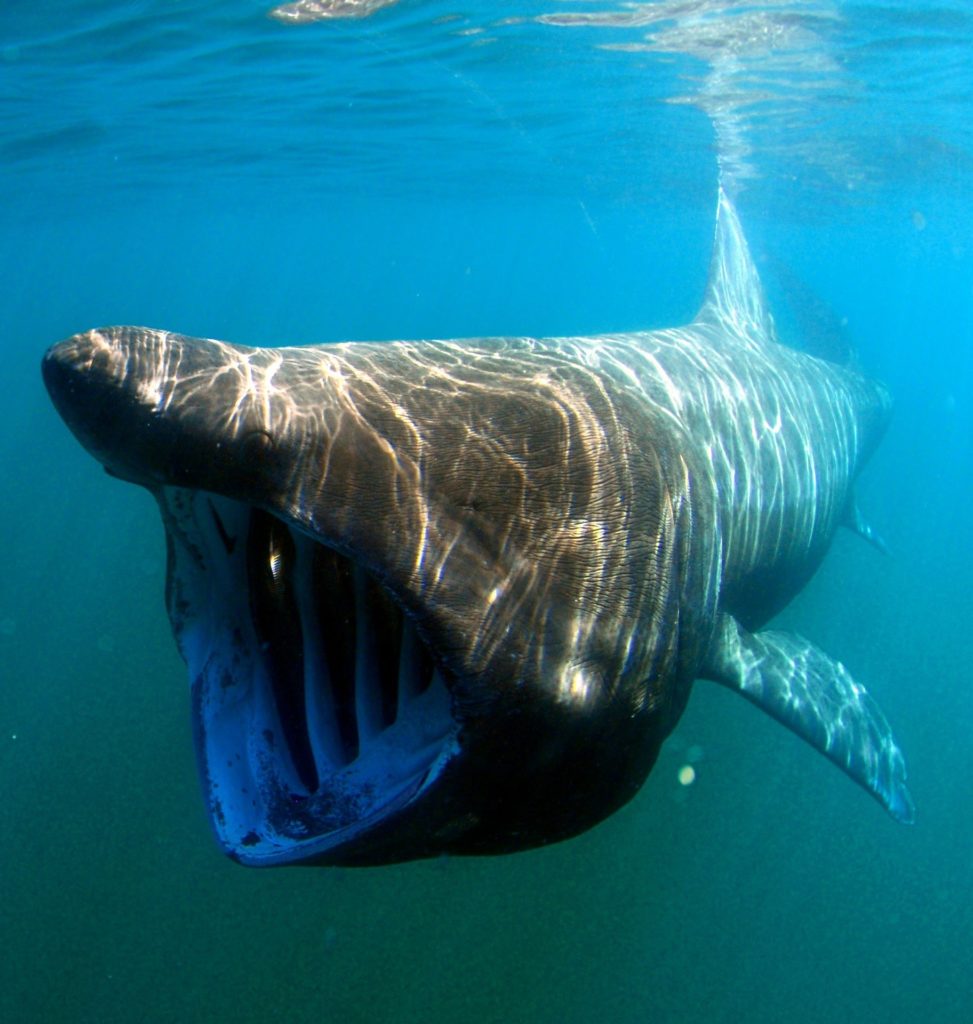 The basking shark is the second-largest shark. Just like the whale shark, this is a filter feeder that feeds on plankton as it swims with an open mouth.

Large basking sharks grow to between 20 and 26 ft. (6 – 8 meters) in length. Apart, from its massive size, the basking shark is identified by its 3-ft. (1-m) wide mouth. Other common names for the basking shark include elephant shark, bone shark, or sail-fish (rekin słoniowy, rekin kostny lub żaglica).

Despite the fact that sharks are apex predators (predators at the top of a food chain – drapieżniki na szczycie łańcucha pokarmowego), many species of sharks are classified as endangered (zagrożone). Every year, an estimated 100 million sharks are killed by people. Many shark populations are depleting at an alarming rate and are close to the danger of extinction…

Sharks are vital to the ecosystem (niezbędne dla ekosystemu) of our oceans and so it is extremely important we learn about what is causing their deaths, so we can all work together to find a solution.