How gun laws in Poland compare to other countries? Posted by Kasia on Oct 11, 2017 in Regulations

A lot of things get unnoticed by, but its inhabitants and neighbours becomes national news, it is often because of a serious or shocking incident. Recently, with 59 dead and more than 500 injured, the worst mass shooting in U.S. history leaves lives destroyed…

The tragedy has left the close-knit Las Vegas entertainment community reeling, just as many in the global live music industry are questioning the future of large-scale outdoor festivals in major cities or even in remote locations. Can we stop this? It’s not only music industry though, it could have been any other industry!

Thirty people will be shot dead in America today. On average. It could be more. If it’s less, then more will die tomorrow. Or the next day. 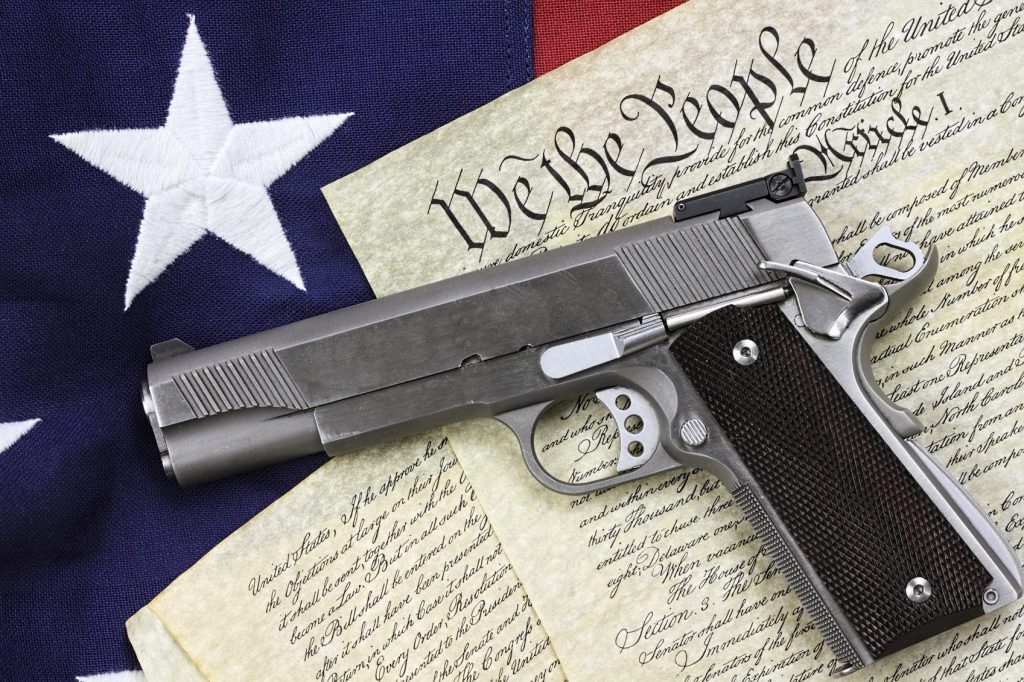 Handgun lying over a copy of the United States constitution and the American flag.

The United States’s gun homicide rate is 25 times higher than other high-income countries. Americans are divided on whether the country’s gun deaths could be reduced through tougher laws on gun ownership. Liberals argue that legal restrictions on gun ownership could save lives. Conservatives say that tougher gun laws would do nothing to change the behaviour of violent criminals.

Even the 2012 Sandy Hook school shooting that left 20 first-graders dead was not enough to convince American lawmakers to pass new gun control laws, with many people seeing the ownership of guns as a crucial check on government tyranny. The country’s highest court has ruled that outright bans on civilian ownership of handguns are unconstitutional.

After similar mass shootings, other countries have taken more dramatic steps to regulate gun ownership. Other countries show that tougher gun laws have been central to these efforts, but that enforcement and culture may also play important roles in preventing violence.

So how is gun control in Poland? Poland has long had some of the strictest firearms regimes in the world – surpassed only by a handful of countries such as Rwanda, Niger, Japan, and North Korea. The roots of this policy are difficult to pinpoint, but it may have had to do with the years of foreign partitions, followed by the Soviet-imposed communist rule; in those trying times, private militias must have been seen as a grave threat to the social order and to the personal safety of the ruling class. Whatever the original reasoning, the effects are plain to see: in today’s Poland, there is almost no tradition of gun ownership or hobby shooting sports; the country averages just around one firearm per 100 residents, compared to almost seven in the UK, fifteen in Australia, sixteen in the Czech Republic, or thirty in Austria, Iceland, Finland, and Germany.

Polish gun law states that nobody with a criminal record can obtain a license. Anyone wishing to obtain a gun license in Poland must also undergo a psychological evaluation, and explain why they want a gun (sport, hunting and self-defence are all acceptable, but in the case of the latter it must also be shown why the applicant believes their life to be in danger). There are further restrictions, including a ban on issuing licences to under-18s, a limit on the amount and type of ammunition that may be kept, and a requirement to demonstrate an understanding of gun safety.

All of this means that the number of guns per capita in Poland is among the lowest in Europe, at around one per 100 people. In many ways, the United States may seem like the polar opposite: we have enough privately-owned firearms to equip every single man, woman, and child. In much of the country, there is no permitting process for new purchases and no registration requirements for handguns, rifles, or shotguns. The weapons can be bought at trade shows, given to family members, or loaned to friends. Long guns and ammo can be bought in sporting stores or at Walmart. And sure, if you want to have AR-15 just because it looks like fun, you can; indeed, many people get it for that reason alone. And all of this really scares me…I’m sure I’m not the only one here…

I grew up on a big fruit farm and I remember my father owning a gun. It was strictly to protect the orchards. We had to have a special metal case for the gun in the house and nobody else, but my dad, was able to use the gun. There were also unexpected visits from the gun control officers, to make sure that the gun was kept in a safe, locked placed, when it wasn’t used. Unfortunately, my family had few terrible accidents, when my parents lost most of what they were working for all their lives…they were all scary robbery accidents. Fortunately, nobody ever got hurt. We never had time or opportunity to defend ourselves with the gun that was in the house…

Poland is not perfect! Of course there are times when guns are misused. Accidents happen too.

I have my own opinion on gun control, but what is yours?…Would love to hear it in comments below