Let’s get crazy! What are some crazy, funny, awesome things to see in Poland? Posted by Kasia on Jan 12, 2016 in Places to visit

And you thought the whole Eastern Europe was nothing but boring grey concrete apartment blocks as far as the eye can see. Ha!

So if you haven’t figured out by now, Poland is pretty great, with spectacular vodka as far as the eye can see, amazing food, and some other fun stuff as well. But it’s not just fancy cathedrals and old-timey charming cobblestones and what have you. That’s great too, but sometimes you just want to see something out of the ordinary, and Poland has a number of quirky tourist attractions that’ll catch your attention and demand a “meanwhile, in Poland” sort of caption.

Let’s see…what should we start with?

How about the world’s biggest Jesus!
It’s called the Christ the King statue (Pomnik Chrystusa Króla), and yup, it’s the tallest statue of Jesus in the world, at 33 m (108 ft) tall. 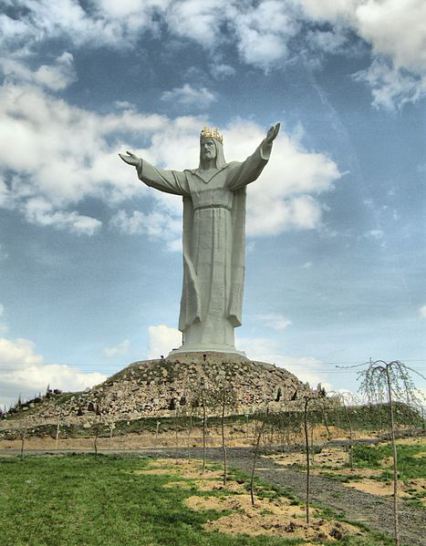 It’s in western Poland, in a town called Świebodzin, and was built on a budget of $1.5 million, and although it might sound a bit like this is all in the service of a “we have a bigger statue than you” sort of contest, the height of 33 meters is also supposed to symbolize Christ’s 33 years. Architect(s): Sylwester Zawadzki (project conception and leadership); Mirosław Kazimierz Patecki (sculpture design); Assoc. Jakub Marcinowski and Assoc. Mikołaj Kłapeć (technical design); Tomasz Stafiniak and Krzysztof Nawojski (clothing and arm design); Marian Wybraniec (foundation design).

It weighs in at 440 tons, or almost 400,000 kg, and took about 4 years to build. It’s quite an impressive site up on the mound without any skyscrapers in the background to steal his thunder.

The Crooked Forest in Poland is another great place to visit. Although not really known by tourists, it is worth seeing. It is full of oddly-shaped trees that look like something really bad happened to them. It’s located outside Nowe Czarnkowo in the West Pomerania Voivodeship (województwo zachodniopomorskie) and it consists about 400 pines planted there around 1930, when the area was German territory. There are many theories explaining the strange shape of the trees. 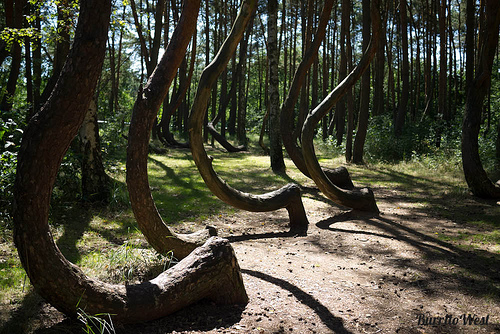 Image by Beach650 on Flickr.com

It is generally believed that the pines were formed this way by some tools or planting techniques, but the motive of such actions is still unknown. Another theory states that the forest looks like that because of the tanks rolling over the young trees during the World War II which forced them to grow in a less conventional way for the trees to grow. Some people also believe that the woods were grown like that on purpose, created by the Compass Timbers (which are used in ship building afterwards). Foreigners in Poland believe that all of these stories are untrue and extremely boring. Whatever the answer is, it’s a great place to see so don’t hesitate to start planning your trip!

More crookedness! Because Poland gets bored when things are boring. I mean, we all do, but Poland decided to do something about it. Or…this architect did.

It’s actually part of a shopping center, and was finished in 2004, in the city of Sopot, in northern Poland.

Tenants include restaurants, clothing stores, coffee shops, and other businesses. It’s bigger on the inside than it looks from the street, since it goes back pretty deep.

When my husband and I visited Sopot, we had to see this place! Great architecture! And we had an amazing lunch in one of the restaurants inside! 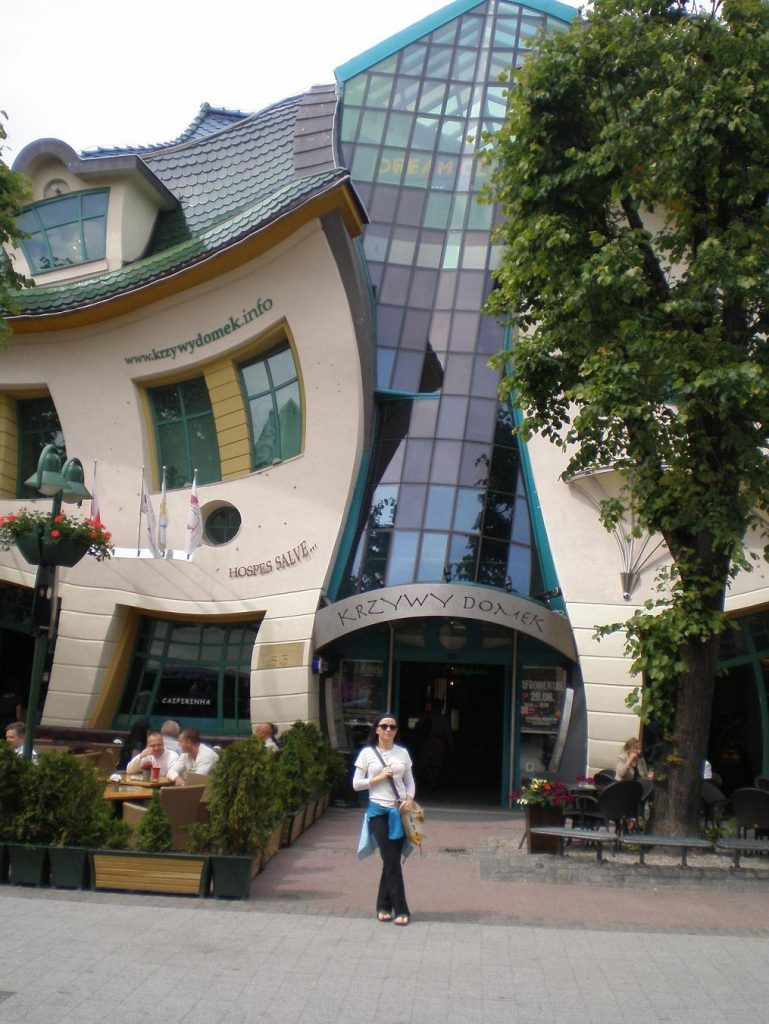 That’s me in fron of the crooked house (Krzywy Domek) in Sopot !

And finally, the upside down house! This one has made the rounds on the internetz for quite some time, because apparently the entire planet is absolutely fascinated by the simple notion of something being placed upside down and that’s all. 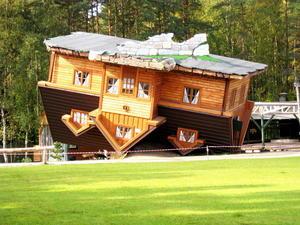 The Upside Down House is a project created by a Polish businessman and philanthropist named Daniel Czapiewski, and is located in Poland in the tiny village of Szymbark. Rather than simply being a bizarre tourist attraction this house, managed to attract thousands of tourists. The house is also meant to be a profound statement about the Communist era and the state of the world. Czapiewski’s company would normally take three weeks to construct a house, but this one took 114 days because the workers were disorientated by the strange angles of the walls. It is not only the exterior is upside down, but every single room in the house and also the furniture. Many tourists who visit complain of mild seasickness and dizziness after just a few minutes of being in the structure.

Have any of you visited all of these places? Which one was your favorite?