Polish winter destination! Posted by Kasia on Dec 8, 2014 in Places to visit

Although the temperatures are low and the skies often grey, there’s plenty to do in Poland in winter. This mighty country gets its first snows in November and the mercury can plummet well below freezing – January and February are the coldest months – so dress appropriately to insulate against the chill.

Although Kraków is an all-year-around destination, other Polish cities are quiet over winter, and some of the country’s biggest attractions, such as Auschwitz-Birkenau, the Jasna Góra Monastery in Częstochowa and Warsaw’s Baroque gem, the Wilanów Palace, will all be quieter and pleasanter to visit. Also, not far away from Zakopane! Great Polish skiing resort town:) It is not often that you get to ski on slopes that have received a papal blessing, but that is one of the pluses of a winter holiday with a difference in the Polish resort of Zakopane.

The late Pope John Paul II (Jan Paweł II) hailed from these parts and during his years at the helm of the Catholic church in Kraków, he liked to retreat to the nearby Tatras and have a quick schuss with the best of them. 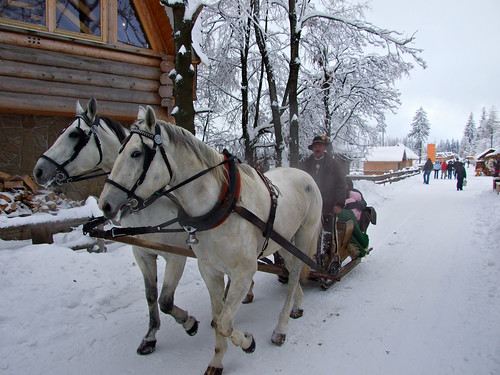 Image by hegarty_david on Flickr.com

Zakopane, located in southern Poland very close to the Tatra National Park (Tatrzański Park Narodowy), offers many attractions all year round. In summer it is very popular with hill walkers and mountain climbers and in winter with the winter sports enthusiasts.

Zakopane has several small skiing areas. Kasprowy Wierch, 3km from the town centre, has high alpine skiing in two treeless bowls. Skiers are transported to the top by cable car running in two sections, the first section goes up to 1350m in about 7 minutes while the second part takes skiers to the top in 10 minutes. Each of the two long slopes is served by its own one-seater chairlift. This is a National Forest Area so there is no artificial snowmaking.

The best quality and amount of (artificial) snow are to be found at Nosal with its single chairlift to the top and T-bars giving access to two-thirds of the slopes. It is FIS certified slope to hold Special Slalom and Giant Slalom. Can get crowded during weekends and it is quite difficult. Some slopes are lit for night skiing.

Another ski-area is Bukowina Tatrzańska, it is situated about 5 km east of Zakopane and it is at much higher altitude. Snow conditions are sometimes much better. Rumours says that there have been serious investments done by the local operators of the ski lifts to establish artificial snow making and bring in new ski lifts.