Where in the World Is Galicia Posted by Anna on Jun 20, 2008 in Uncategorized

I would like to welcome all my new readers and thank you guys for commenting. It’s great to see your feedback! I also want to encourage you to ask me questions and offer suggestion regarding what you want me to write about here. Don’t be shy! Whether it’s grammar, spelling, history, or “my grandma used to make this yummy Polish dish”, I will do my best to answer all your queries.

Ed already started by asking about Galicia in his comment. So today, it’s all Galicia all the time. Ed, enjoy! And let me know if this is the information you were looking for.

The problem with Galicia is that there are actually two of them, one in Poland and one in Spain. And if you’re not quite sure which Galicia region you have in mind, it can be quite confusing –it was even to me when I was in school. Here, of course we’ll talk about Galicia in central Europe.

The name “Galicia” (Galicja in Polish) is a historical term, and as such – is no longer used to describe the area. And the region itself is now divided between Poland and Ukraine. So just where exactly this Galicia used to be? Get a map of Ukraine and look for Lviv (Lwów in Polish), then go a little bit east until you reach Ternopil (Tarnopol in Polish). From there trace a bit south-west to Ivano-Frankovsk. That little triangle is the original Galicia.

Yes, it is NOW. Back in those days, Poland stretched pretty far to the east. As a matter of fact, Lvov was a Polish city. Galicia managed to grow quite substantially throughout the years. After the partition of Poland, it became an Austrian province incorporating Cracow (Kraków) to the west, Lublin to the north, and going as far south-east as the present Moldovan border. A pretty big chunk of land, wouldn’t you say? 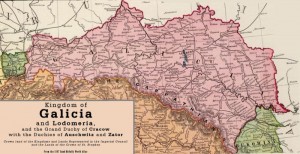 ‘Whither Galicia’ via the Head Wide Open blog

There were additional territorial changes throughout the years. Russia got a bit of Galician land to the north, a lot of stuff was happening on the eastern border, people kept moving back and forth, the usual historical stuff. The big deal happened in 1873, when the province became officially an autonomous part of the Austro- Hungarian Empire. Polish was re-instituted as the official language (along with Ukrainian in the east) and everybody hoped for bigger, better, brighter future.

Sadly, the changes were not forthcoming. Galicia might have been autonomous, but it was also one of the most populous and at the same time the poorest provinces in the Empire. So around the 1880s, the peasants decided they had enough of living in abject poverty and started moving away in droves. First to Germany, and then to the US, Canada and Brazil.

Galicians were never a homogenous breed, they were a typical eastern European mix of a little bit of everything: Poles, Ukrainians, Jews, Germans and what not. And even while emigrating, those different nationalities stuck together. Germans naturally migrated to Germany, Ukrainians – in the beginning to Brazil, and Poles and Jews – to the US and Canada.

After the First World War, when western Galicia became part of the newly restored Republic of Poland, the emigration frenzy slowed down somewhat. The estimates vary, but all in all, anywhere from several hundred thousand to a million people went looking for a better life across the Atlantic.

If you have any Galician place names you’re not sure about, just leave me a comment and I’ll see what I can dig up.