Celebrating Carnaval in Brazil Posted by sasha on Mar 12, 2018 in Culture, Holidays

Bom dia a todos! Meu nome é Sasha. Eu sou dos Estados Unidos. Sorry but I don’t have much more Portuguese in my arsenal. I’m an English teacher and a blogger on the Spanish and Chinese pages. I also run Grateful Gypsies with my lovely wife. I recently had my first experience with the Portuguese-speaking world as I traveled to Brazil for Carnaval and to visit a few other places such as Florianópolis and Foz do Iguaçu. I’m just dropping by the blog here to share my experience celebrating Carnaval in Brazil. I was fortunate enough to partake in the festivities in three different cities. Here’s a little taste of what it’s like at the biggest party in the world. 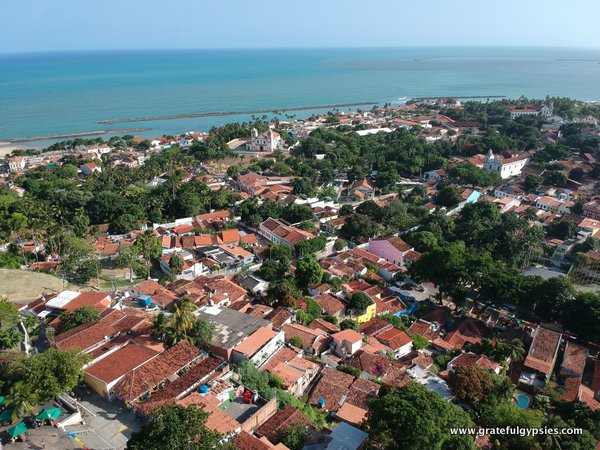 To begin our Carnaval adventure, we traveled to the northeast coast to the state of Pernambuco. First up, we spent three days in the historic town of Olinda. Founded in the 16th century by the Portuguese, Olinda grew rapidly thanks to the sugar cane industry. The Dutch pillaged the town and it was later rebuilt by the Portuguese in the 18th century. Olinda’s historic center is now a UNESCO World Heritage Site thanks to buildings such as the Catedral Alto da Sé and the church of Nossa Senhora da Graça. Here’s a great description of Olinda from the poet Carlos Pena Filho:

Olinda is only for the eyes,
it’s not tangible, it’s just desire.
No one says: that’s where I live.
They just say: that’s what I see.

In addition to its historic architecture and gorgeous landscape, Olinda is famous for its traditional Carnaval celebrations. As is the case all over Brazil, the party starts well before the official Carnaval days. We arrived on the Monday before the big weekend to find lively blocos already underway. People aren’t dancing to samba here, as the main styles of music are frevo and maracatu. 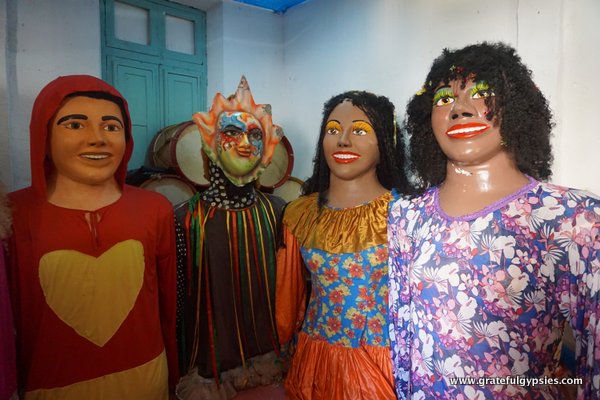 A few of the bonecos gigantes.

The biggest stars of Carnaval in Olinda are definitely the bonecos gigantes. These giant dolls have been a part of the celebrations here since way back in 1919. They’re made from paper maché and fabric and can be upwards of 15 feet tall. There are a few workshops in town where you can pay a few reals to see them up close. The most famous is the Midnight Man, who comes out to kick off Sábado de Zé Pereira (Carnaval Saturday). 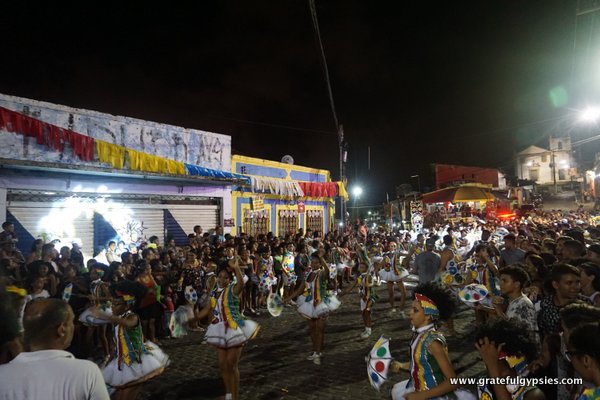 One of the many blocos we attended.

We had a great couple of days exploring Olinda and enjoying the pre-Carnaval festivities. During the main weekend, everyone says that it’s best to party in Olinda during the day and Recife at night. We came back on Saturday to find the town had seemingly tripled in size. It definitely gets wild here during the actual Carnaval days! 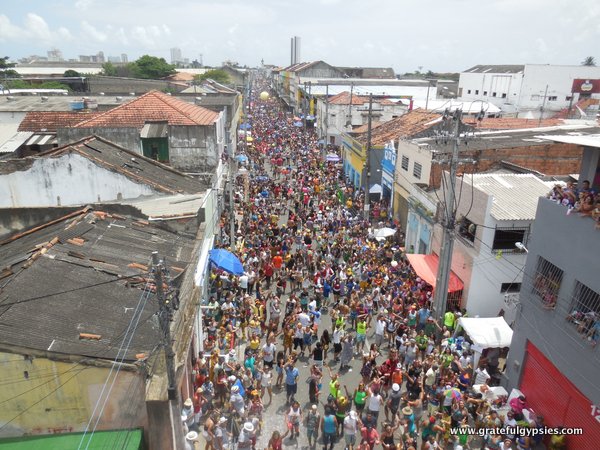 From the colonial town, we headed down the road a few kilometers to the big city of Recife. The Carnaval of Recife is famed for its parade that begins early on Saturday morning. It’s appropriately named Galo da Madrugada (Rooster of Early Hours) as it gets going around 8 AM. With over 2 million people lining the streets, it has the Guinness Book of World Records designation as the biggest Carnaval parade in the world. If you’re going to the parade, you’ll want to learn the song “Hino do Galo da Madrugada” first:

The parade was absolute madness on the street. In hindsight, I wish we had paid to be in a camarote. These are basically private parties where you get some shade, room to breathe, drinks and snacks, and the all important bathrooms. To say it was intense trying to move through the crowd on the street is an understatement. Two hours there was more than enough for us! 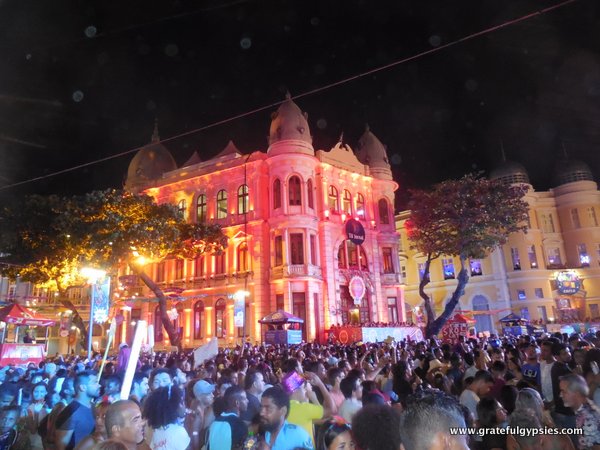 Joining the crowd in Marco Zero.

We much more enjoyed hanging out in Praça do Marco Zero at night. The streets were full of blocos and there were several stages with live bands playing every night. There was also lots of yummy street food and plenty of vendors mixing up strong caipirinhas. It was a great couple of nights celebrating Carnaval in Recife. There was one more Carnaval stop on our itinerary, and I’m sure you can guess where it was. 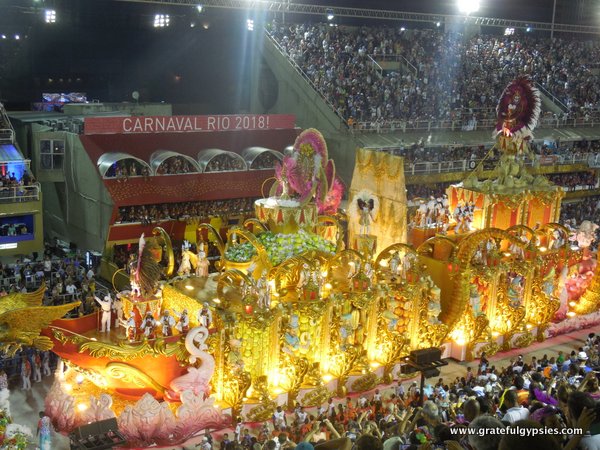 The floats are absolutely unreal!

No city is more synonymous with Carnaval than Rio, so we knew we had to get there for the last few days of the festivities. Fortunately, we were able to score tickets for the Sambadrome at the local price. It was still a bit pricey at $100 each, but it was well worth it. It’s the most colorful and energetic thing I’ve ever seen and I’d go again in a heartbeat.

Other than attend the Sambadrome, we just bounced around the city hitting different blocos. The city really is one giant party during Carnaval, both day and night. We were staying up the hill in the Santa Teresa neighborhood, which had plenty of parties going on throughout our stay. 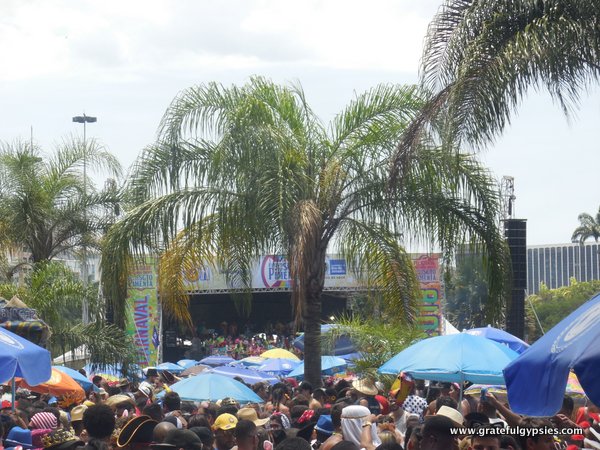 Our favorite bloco that we attended was without a doubt Sargento Pimenta. In case you’re wondering, yes that means “Sergeant Pepper” in Portuguese, and yes they played samba versions of Beatles songs. Apparently 180,000 people attend this bloco, which is bigger than the biggest music festival in the US! 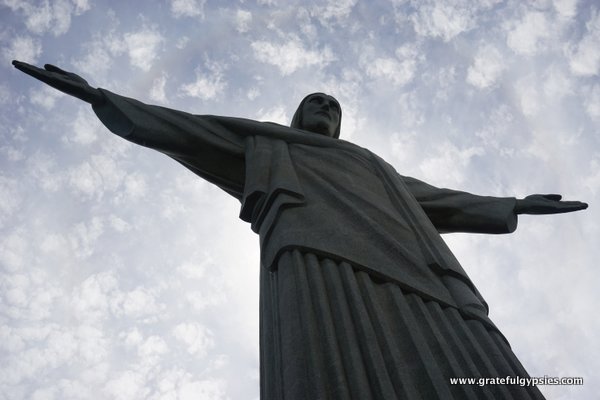 With just two days after Carnaval to spend in Rio, we joined some friends on a boat trip around Ilha Grande to relax after the madness. On our last day, we did a whirlwind tour hitting the Escadaria Selarón, Cristo Redentor, and of course a little time at Copacobana. Rio is an amazing city and I can’t wait to get back there and dive a bit deeper. 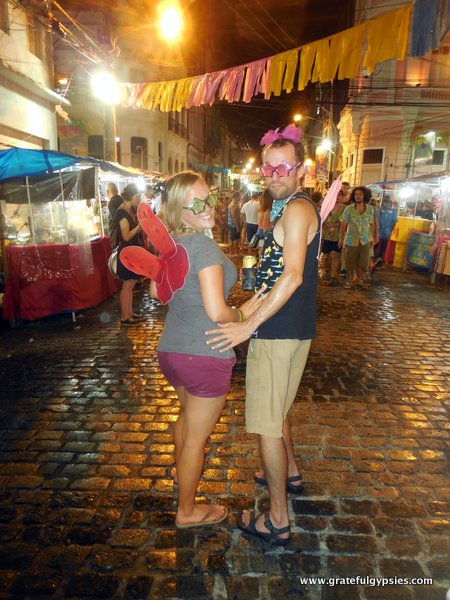 We had an awesome time!

I’d be lying if I said I wasn’t a little nervous traveling to Brazil. The country doesn’t exactly have the best reputation as far as safety goes. Even a Brazilian friend I met in Bali said we were crazy for wanting to go during Carnaval. That being said, we had an amazing 2.5 week trip with zero issues. As long as you use common sense and have your wits about you – don’t wear shiny jewelry and flash your fancy camera around – you can enjoy Carnaval with the rest of the jubilant crowd. We had such a good time that we’re already planning our return for next year. Thankfully we have 10-year visas now so we could even go every year up until 2028! Of course, I think next time I’ll try to learn some Portuguese before traveling to Brazil. There’s at least one phrase I’ll always remember – Bom Carnaval!

Have you celebrated Carnaval in Brazil? Where did you go? What was your experience like? Leave a comment and let us know!