People taking to the streets to protest in Brazil is something that has been happening for the past 2-3 years. So this week we will talk about the main points Brazilian protestants are trying to make. In addition, we will also be checking out some vocabulary related to it. 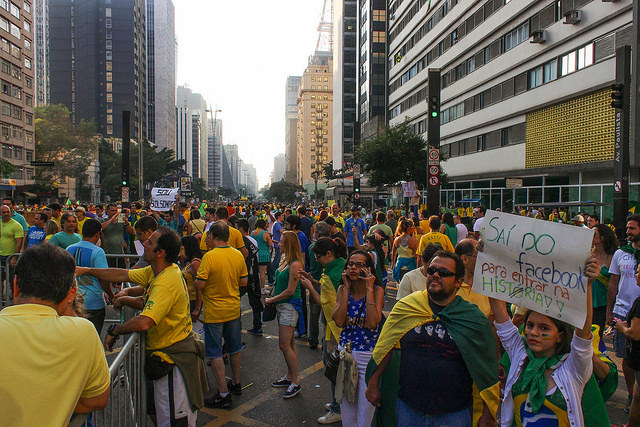 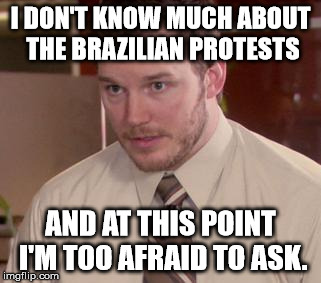 People who have been following the news know that there was another protest yesterday, Sunday 16th August in 22 of the Brazilian states. But what are all these protests about?

The protestos (protests) started in 2013 against the increase in the bus fare. People took to the streets to complain that the public transport (especially buses) were in bad condition and did not fulfill the public’s needs and on top of that were overpriced. Tourists in Brazil might argue that the prices are not that bad, and this is probably true if you earn money in dollars, euro or pounds. However, this would not be the case for a Brazilian earning minimum wage in Brazilian currency – reais. As a result, the public transport companies decided not to put up the prices, a measure which lasted only a few months until people started protesting against the world cup instead. After that the prices went back up, but fewer people are now protesting.

Shortly after the beginning of the protests, Brazilian people realised they could get their voices heard, and so the protests against the expenditure on stadiums and infrastructure for the 2014 Soccer World Cup began. At this stage, which I will call the segunda fase dos protestos (second phase of the protests), Brazilians were already fed up with the massive amount of money that had been spent and would be spent building stadiums. The nation felt as if their money had been stolen by the government, since many brasileiros would have given up the world cup in order to have more funds for saúde e educação (health and education). The world cup came and went and nothing was done or changed. The stadiums were built, some of them are barely used, and are now, quoting John Oliver in Last Week tonight with John Oliver: FIFA and the World Cup, “the world’s most expensive bird toilet”.

After the World Cup Brazilians had to accept that there was no way of changing what had already been done, so the nation’s attention turned to politics. This brings us to the present and what I will call the terceira fase dos protestos (third phase of the protests), which started in 2014 before the presidential election. The Polícia Federal do Brasil started a money laundry investigation in March 2014, which would soon become known as Operação Lava Jato, the biggest corruption scheme in the history of the country. When the Polícia Federal started arresting people involved in the scheme, the population became aware that most of the arrested were either politicians or somehow connected to politics and that a large number of them belonged to the Partido Trabalhista or simple PT (work party). Even though the people found guilty of being part of the scheme were not only from PT, the general dissatisfaction with the party grew bigger and people started distrusting the leaders, as well as presidente Dilma Rousseff, who chaired the oil company Petrobrás before being elected president.

The protests nowadays are mostly for Dilma’s impeachment. There are different reasons why people want to see Dilma gone. Whereas some just wish for a change in government since they believe Dilma has not been a good president and has lost control over the country and state oil company Petrobrás, others believe (even though Dilma has not been convicted of anything) that there is no way she was neither involved or aware of the money laundry, since she is to some degree connected to people who have already been convicted.

The lack of support the government is getting is so substantial that people do not wish to listen to what Dilma Rousseff has to say anymore, so whenever there is a speech being broadcast on television, people just do a panelaço (check vocabulary section above) instead of listening to what she has to say.

(Do you want to know more about the protest? Check out this link):