Experiencing the World Cup in Russia Posted by sasha on Jul 9, 2018 in Uncategorized

привет! Меня зовут Саша (Hello! My name is Sasha). I may have a Russian name, but unfortunately I don’t speak much Russian. My dad grew up in Russia and moved to the States over 35 years ago. All my life, I had always wanted to visit the “Motherland.” I finally got my chance last month, as I traveled to Russia for the Чемпионат мира по футболу (World Cup). Here’s a little story of what it was like experiencing the World Cup in Russia.

Like I said, my pops is Russian but I had never traveled there before. Many people wonder why it is that I can’t speak my dad’s native language. Well, there are a few reasons for that. First of all, my dad is a врач (doctor) and he always had crazy hours when we were growing up – working the graveyard 7PM-7AM shift – so he wasn’t exactly able to teach us. 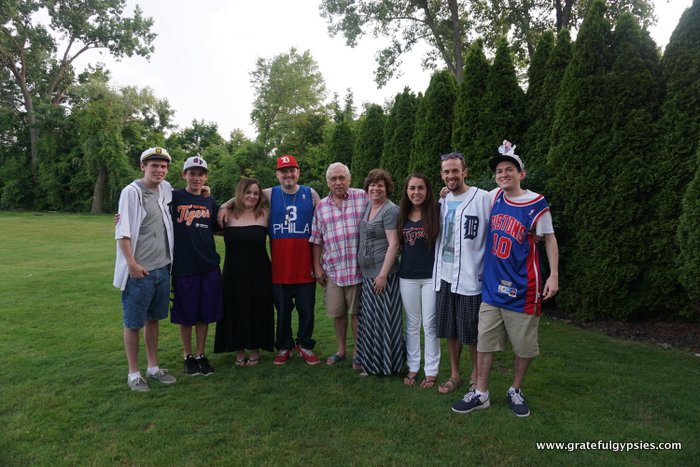 Oh yeah, by us I mean myself and my six younger siblings. It’s a lot of work keeping a roof over the head and food on the table for that many people! Finally, the schools in my hometown didn’t have Russian as an option for foreign languages. I actually studied Latin in high school and didn’t even take a language in college.

After I graduated, I moved to Китай (China) to teach English. While living in Beijing, I met and hung out with many Russians. One exchange with a girl went something like this:

“Your name is Sasha Savinov and you can’t speak Russian?”

Since then, I’ve also lived in Индонезия (Indonesia) and Мексика (Mexico). I’ve also traveled to twenty-something countries. Although I was filling in many countries on my travel map, there was still one giant blank space – Матушка Россия (Mother Russia) herself. When it was announced that Russia would be hosting the 2018 World Cup, I started planning the trip with one of my brothers. We requested tickets for four games before the groups were announced and hoped for the best. As luck would have it, we got all four tickets and ended up seeing some pretty amazing matches. Now let’s get on with the story and I’ll go over some highlights of the World Cup in Russia. 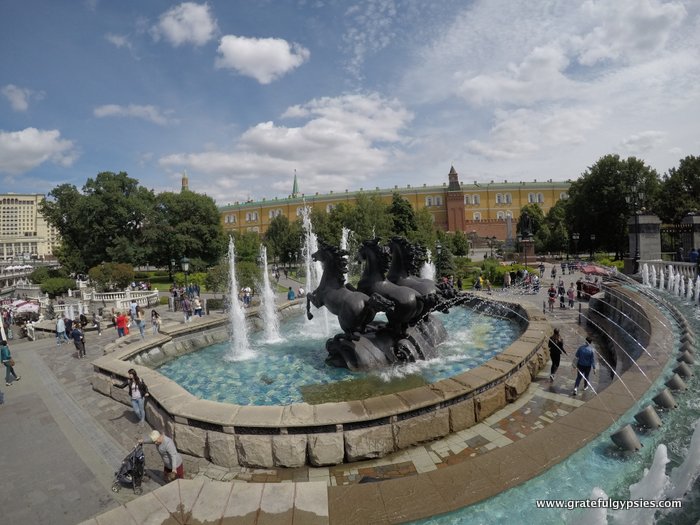 A beautiful day in Moscow.

We started our trip in the capital city and my dad’s former home – Москва (Moscow). We arrived one day before the World Cup started, so we decided to join the free walking tour to learn a bit about the city and its history. The tour was excellent and I’d highly recommend it if you travel to Moscow. Our guide, Marina, was very passionate about introducing her city to a massive group of football fans from all over the world. We had Americans, Brazilians, Peruvians, Australians, Egyptians, and more. This was easily one of the best parts about experiencing the World Cup in Russia – meeting people from all over the world every day. 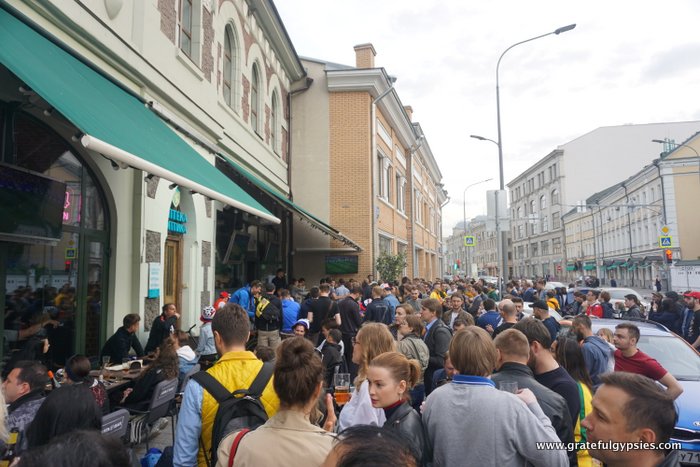 Partying in the street for the first game.

That night, the first game took place between Russia and Saudi Arabia. Tickets were far too expensive for us, so we tried to find a good sports bar to watch the game with a local crowd. Our guide had recommended Liga Pap, so we headed there to check it out. It’s an awesome sports bar with stadium-style seating and a projector. Of course, every single table was booked up well in advance. We ended up catching the first half at another bar down the street, but we returned to Liga Pap for the atmosphere. Even though we had to stand in the street outside of the bar, it was worth it to experience the sheer jubilation of the Russian fans as they trounced Saudi Arabia 5-0. 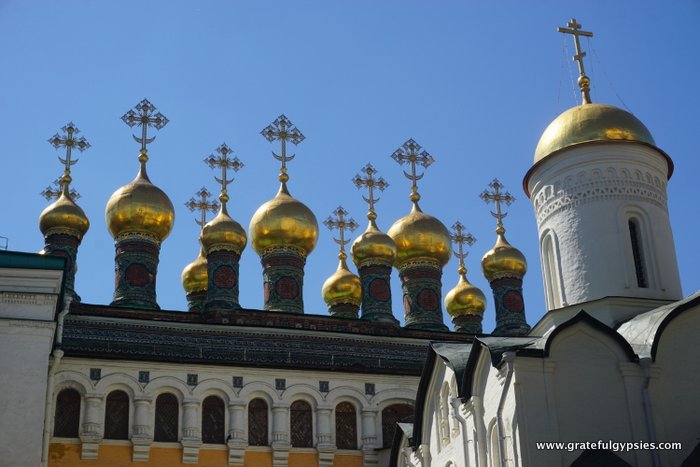 Of course, we also had to see some of the city. Unfortunately, Красная площадь (Red Square) was closed while we were there, but we could still walk around it and see the famous Храм Василия Блаженного (Saint Basil’s Cathedral). The line was way too long for our liking, so we just admired it from outside. Another day, we paid a visit to the Моско́вский Кремль (Moscow Kremlin) and went in to see the many churches. 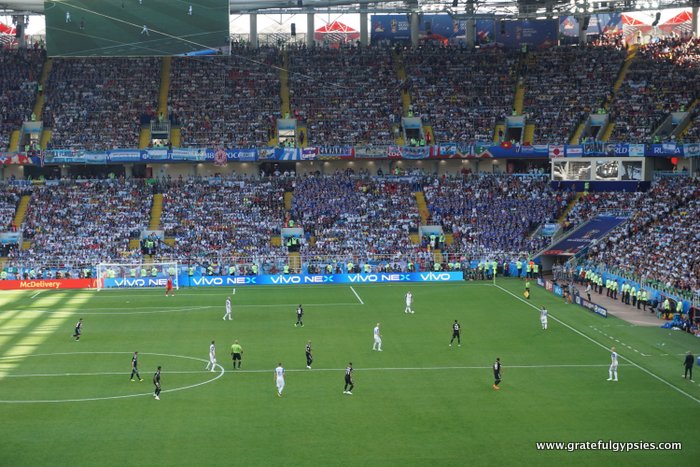 Sightseeing was great and all, but we went to Russia primarily for the футбол (football). Our first match was at Открытие Арена (Okritie Arena), which is also known as Spartak Stadium. We saw Аргентина (Argentina) vs. Исландия (Iceland). Everyone thought the mighty Messi and his team would prevail, but thanks to a blocked penalty kick the game finished in a 1-1 draw. 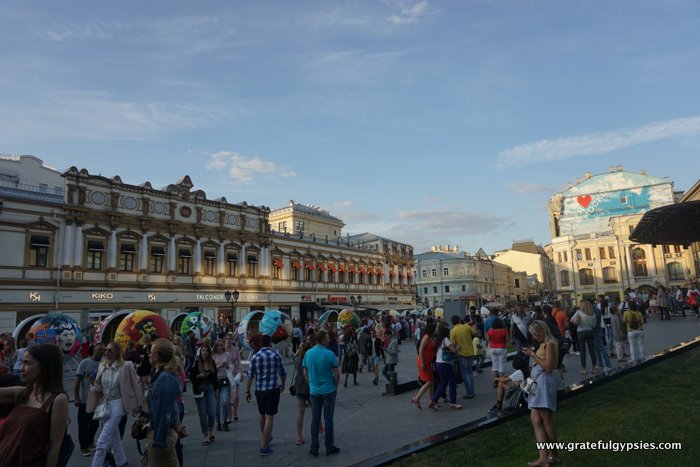 The football fever spread all across the city, as fans congregated outside the Four Seasons Hotel, along the city’s pedestrian-only streets, and of course at the massive Fifa Fan Fest. People wore their country’s jerseys or traditional clothing, waved their flags, and even started impromptu dance parties. A group of Colombians got a massive salsa party going, and people from dozens of other countries couldn’t help but jump in and share in the groove. The energy is absolutely infectious and is a major highlight of being a part of the World Cup. 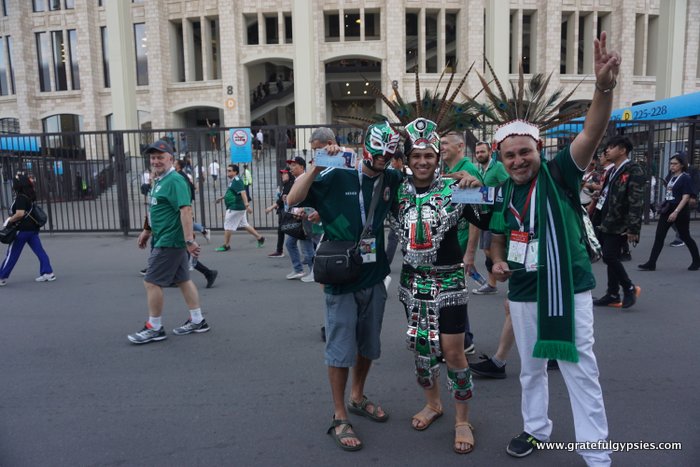 Of course I had to cheer for Mexico.

Our next match was the one I was most excited for – my new home country of Mexico going against the defending champions, Германия (Germany). This game happened at the national stadium of Russia – стадион Лужники (Luzhniki Stadium). I went all out and put on my Mexico jersey and my red, white, and green lucha libre mask. 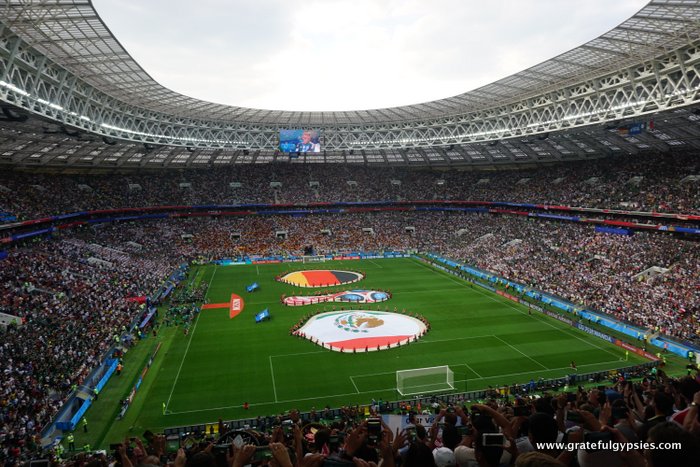 It was an exciting game from start to finish, with Mexico prevailing 1-0 in the end. It was the start of a rocky World Cup for the heavily-favored Germans, who would fail to qualify for the knockout stage. 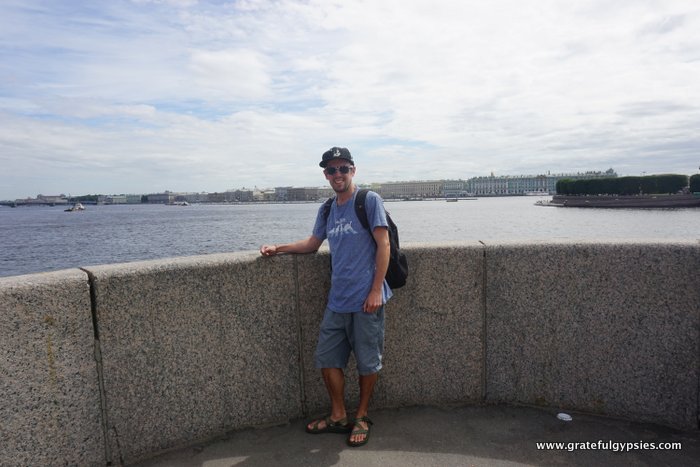 Yours truly in St. Petersburg.

Next up, we caught an overnight train to Санкт-Петербург (Saint Petersburg). My brother is actually named after Peter the Great, so he was pretty excited to finally be visiting the city. Our dad always told us that Saint Petersburg is one of the most beautiful cities in Europe, and I would have to agree. We thoroughly enjoyed just wandering the city streets and admiring the architecture. 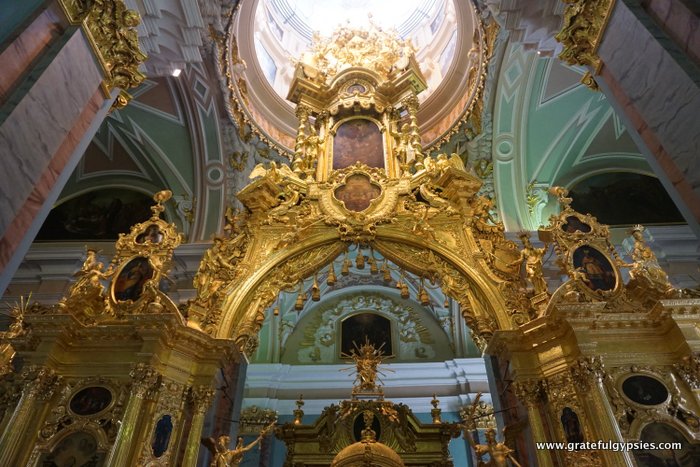 Our trip to St. Petersburg started out with a visit to the Петропа́вловская кре́пость (Peter and Paul’s Fortress). The main attraction here is the Peter and Paul Cathedral, which is the burial place for most of the Russian tsars, including Peter himself. Growing up, we always heard stories about the tsars and their tragic demise. It was nice to finally learn about some of our Russian heritage in person and visit some of these important sights. I hope to return to Russia soon without the distraction of a big event like the World Cup so I can explore and learn more. 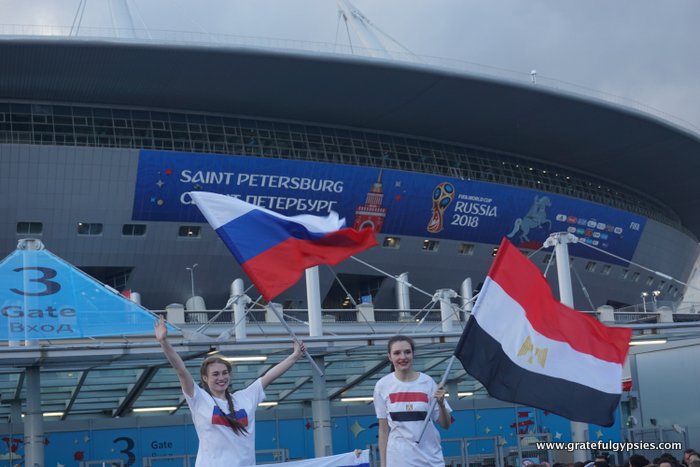 Some of the many volunteers who helped at the World Cup.

We got the chance to cheer on the home team as we saw Russia play against Египет (Egypt). This game happened at стадион Крестовский (Krestovsky Stadium), which is also simply called St. Petersburg Stadium. At a cost of around $1 billion, it’s one of the most expensive stadiums ever built. 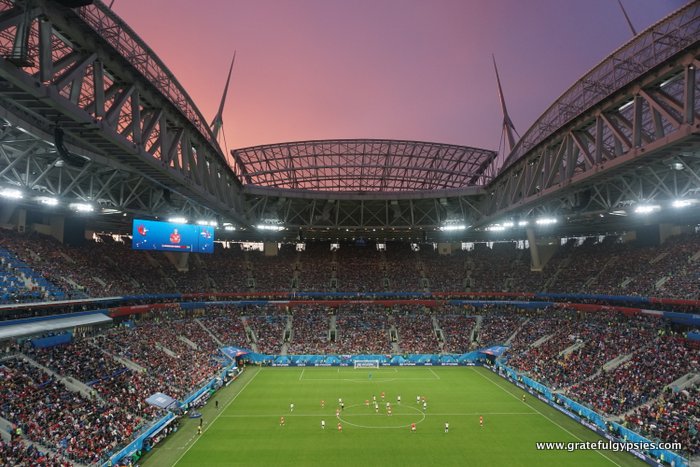 What a night for football!

The Russian team was still riding the wave of their opening game blowout, and that momentum carried into their second match. Egypt managed to score on a penalty kick but they were no match for Russia, who put three goals on the board and took another impressive win. 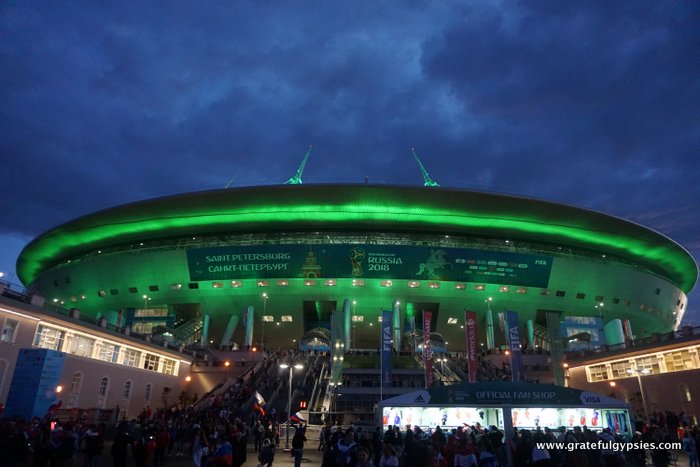 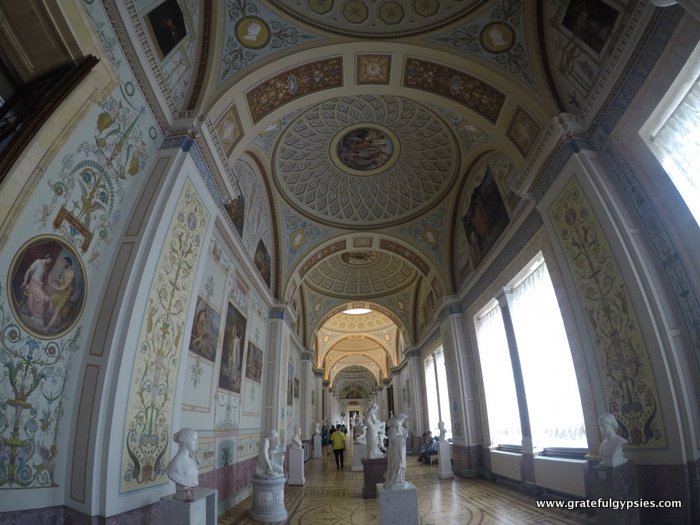 With another full day in the city, we visited the Госуда́рственный Эрмита́ж (State Hermitage Museum). The line to get in was massive, but it was worth the wait to spend the day exploring the world’s 2nd largest museum. There’s so much to see and learn in here that it’s a bit overwhelming. You could easily spend a couple of days there and still not see it all. 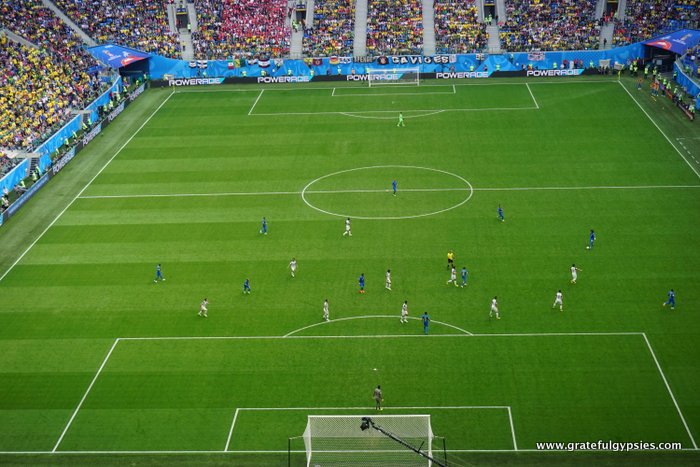 On our final day in Russia, we had the chance to see Бразилия (Brazil) play Costa Rica (Коста-Рика). As you might expect, the Brazilian fans showed up in droves. They’re some of the most passionate (and loudest) football fans out there, making the atmosphere in the stadium electric. Somehow Costa Rica managed to hang tough until the very end. Brazil ended up scoring twice during injury time to run away with a 2-0 victory.

Looking back on it, my first trip to Russia was a huge success. I wasn’t quite sure what to expect, and I tried to go in with an open mind. Despite their reputation as being a bit, shall we say, cold, I found that most Russians I met were very friendly and eager to help. On several occasions, we were staring confusedly at the metro map when a local would come up and point us in the right direction. 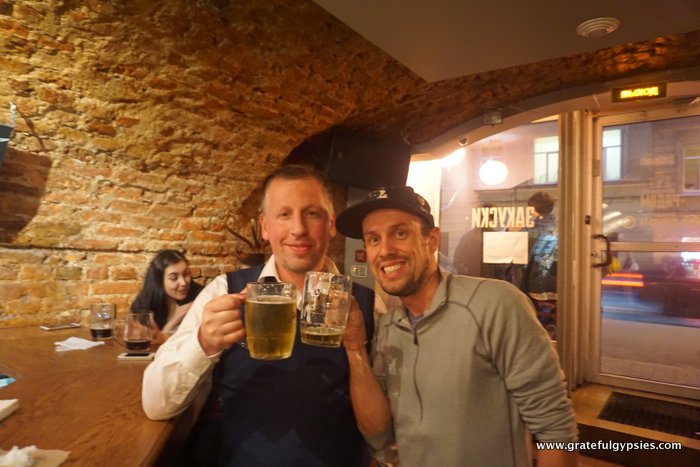 When drinking at a local watering hole in St. Petersburg, we made new friends who insisted on feeding us shots of водка (vodka) and some odd yet delicious fish sandwiches. It’s these fun interactions with locals that makes me love traveling.

It may have taken me 32 years to finally visit Russia, but hopefully it won’t take that long to get back. One of these days, I hope to take the Trans-Mongolia Railway from Moscow all the way back to my former home of Beijing, stopping along the way to see more of Russia. Maybe next time I’ll actually pick up some Russian before I go…

You can find my writing and videos at my website – Grateful Gypsies. I also regularly contribute to the Chinese, Spanish, and English language blogs.