Meet the Verb: «собираться»! Posted by josefina on Jun 25, 2010 in Culture, language, Russian life, when in Russia

Maybe somewhere in between all the recent posts by Yelena on our blog – as well as Vickie’s excellent guest post two days ago – you might have asked yourselves: «А где же Джозефина?!» [“But where is Josefina?!”] I know there’s been a significant gap without me posting here about the wondrous world of Russian grammar (and we all know how hard it is to live for a day without learning something new and exiting about everyone’s favorite language!), but I have a reason for this – and believe me, it’s a good one! Right now «я всё ещё в Екатеринбурге» [I’m still in Yekaterinburg], but let me tell you «где я была» [where I was] a week before this: «я съездила в Москву и в Вологду» [I went (traveled) to Moscow and Vologda]. What did I do there, then? I thought that today I would tell you first about my trip «в европейскую часть Российской федерации» [to the European part of Russian Federation] by way of a couple of informative pictures. After that I’ll explain why I have chosen this particular post to introduce one of the most mysterious verbs of the Russian language: «собираться» [impfv. 1) to gather, assemble; 2) to prepare, get ready; 3) to be gathering, be in the offing; 4) to intend to; 5) to be about to]. Yes, this marvelous little verb has no less than five possible connotations and plausible ways of being translated into English! Aren’t you exited now to find out what makes this particular verb perfect for what I am about to do in less than three days: «уехать из России» [to leave Russia]? 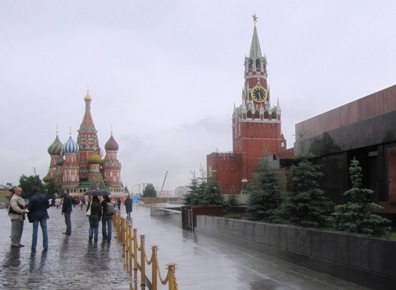 The Russians themselves say that it is a sure sign you’re «из провинции» [from the province] if the first thing you do when in Moscow is «пойти на Красную площадь» [to go to Red Square]. I’m not ashamed to say that this is always what I do first thing when I’m in the Russian «столица» [capital] because I lived «вся моя русская жизнь в провинции» [all of my Russian life in the province]… 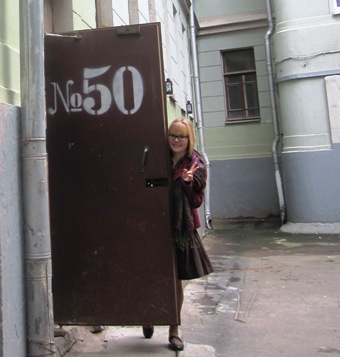 But this time I decided to do something I had never done before while in Moscow: «посетить музей Булгакова» [to visit the Bulgakov museum]. It’s free! Here I am standing behind the door to «квартира номер 50 (пятьдесят)» [apartment number 50], known in «Мастер и Маргарита» [“The Master and Margarita”] as «нехорошая квартира» [a not good (or: bad) apartment]. On the top floor you can visit the apartment where Bulgakov lived, but the entrance costs money. 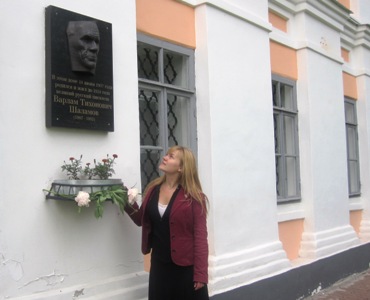 After Moscow I took the train to Vologda, where I celebrated the birthday of my most beloved Russian writer «Варлам Тихонович Шаламов» [Varlam Tikhonovich Shalamov] on the 18th of June at the Shalamov House together with a group of young scholars from Moscow. The more attentive readers might remember that I first visited Vologda in January this year, and that this was also because of Shalamov. I try not to make all of my posts here on the blog about this writer – but sometimes he might slip in without me wanting it… «Что делать? Он же великий писатель!» [What can you do? He’s a great writer!]. 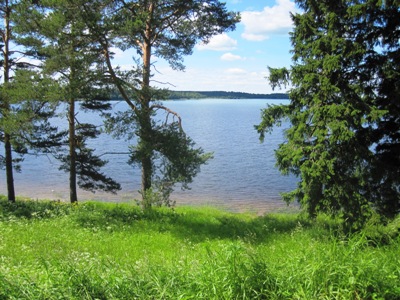 While being so close to «русский север» [the Russian north], we decided to hop on a bus and travel for three hours further north and visit the small town of «Кириллов» [Kirillov]. From there we took a taxi to the village of «Ферапонт» [Ferapont], where there’s an amazingly beautiful monastery that’s on UNESCO’s list of world heritage. Why? Because it has intact frescos from the 14th century!

Now I’m back «на Урале» [in the Urals] once again, and right now «собираю свою русскую жизнь» [I’m gathering my Russian life]. It feels «так странно» [so strange] that I’m about to leave this country for just as long a period of time as I have spent living here – «шесть лет» [six years]. It goes without saying that I am now very different from the nineteen year old girl I was when I arrived in «Санкт-Петербург» [Saint Petersburg] in August 2004. Yes, I’m «старше» [older], «опытнее» [more experienced] and «умнее» [smarter]. And it feels «ещё страннее» [even stranger] to think of this country now and try «собираться с мыслями» [to collect my thoughts] about what Russia have come to mean to me through the years. There’s too much to say, too much that’s on my heart, in my mind – and yet «так не хватает слов!» [there aren’t enough words!]. Of course, I wouldn’t be who I am today «без России» [without Russia], «без русского опыта» [without (my) Russian experience], «без опыта жизни и выживания в России» [without the experience of (lit. life) living and surviving in Russia]. I once heard a foreigner – who had lived and worked in Russia for several years – say that he could write a book about every week he spent in Russia. I don’t know who would read such a book; but I know I could also do that  – easily! But the thing about life is that most things become apparent, clear and comprehensible to us only «в сравнении» [in comparison] and «на расстоянии» [from a distance]. And the best distance of all is «время» [time]. I had to live a couple of years in Russia before I understood what inside of me is Swedish; i.e. what has its source in my nationality, my cultural heritage and upbringing – and what is simply me. That’s why I think it is still too early for me now to say just WHAT I’ll bring with me from this country. «С годами» [with the years] I’ll come to realize what part of me is Russian… For already now I know that I’m partly Russian. One cannot live for this long in a foreign country without making it your own and yourself a part of it. If you can, then you’re not doing the whole immigration thing right!

The past couple of days I have done little else but dedicate myself completely to the verb «собираться»: here in the sense of ‘getting ready’. But «собираться» can also mean ‘to intend to’, and thus the sentence «я собираюсь уехать» may translate into ‘I’m planning to leave’ but also ‘I intend to leave’. The first sentence indicates a very direct plan to do something; the second one not so much. It only states a wish, perhaps an intention – or maybe it was said with strong emotions and tomorrow – when sober – it will not mean anything. «Собираться» is intentionally fuzzy and was probably made up by the Russians so as to confuse non-native speakers. The interesting thing about this verb is that it sometimes doesn’t indicate any action at all (and we all know that we need verbs to tell people we’re DOING something or other). That makes «собираться» different from almost all other verbs in all other languages. For example, when Russians say «Сейчас собираемся» [Now we’re getting ready] it doesn’t have to indicate any movement – it is often said and then followed by, for example, everyone remaining seated at the table and the host pouring you another glass. Or how about this dialogue:

«Собирался прийти, да не получилось» [I planned to (intended to, was about to) come, but it didn’t work out].

Really what this person did was not any action at all; and we will never find out exactly what his «собирание» [‘getting ready’, ‘intending’] constituted of. So what is the confused non-native speaker to do when confronted with such a strange verb as this one? The only good way to handle is to do as the Russians – use it to your advantage! How? For example, let’s say you agreed to meet someone at a particular place at a particular time. Then you forgot all about it. The person calls you and you’re already ten minutes late. What do you say? «Собираюсь!» [I’m getting ready!] of course! It sounds like you’re already half way there, when in reality you haven’t even put on your shoes yet. This verb always saves the day when you haven’t done something you’re supposed to have done – you can always say «собираюсь» and then continue sipping your tea.

P.S. the perfect to this verb is «собраться» 😉 But do note that it is used much less frequently in colloquial speech!