The Russian Romance with the Guitar Posted by ryan on Oct 15, 2021 in Music, Soviet Union

It is difficult to imagine modern music without the guitar. It occupies an irreplaceable space in the modern ensemble. Its repertoire is vast, having been adapted to all genres of music. Each place it goes, it is adapted, and it was adapted for Russia as well. When the guitar first came to Russia, it had a unique sound and structure. But how did this versatile instrument make its appearance in Russia? Enter the beloved семистру́нка (семистру́нная гита́ра) the seven-string guitar. 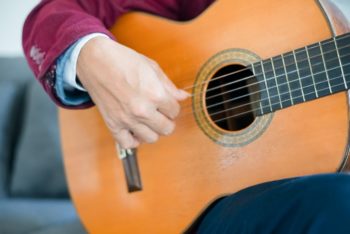 The guitar first gained popularity in the late 18th century. Until the October Revolution in 1917, it was virtually the only guitar known in Russia, where it was played as an accompaniment to Russian romances (a genre of Russian music popular in the 19th century) and folk music. After the creation of the Soviet Union, the six-string made an appearance, but its popularity was still contested by the seven-string, which was better known in folk settings. The seven-string guitar had its last hurrah in the 1960s-1980s in the era of the Soviet bards, who were poets that usually wrote and performed their own music.

Now that we are thinking about guitars, we might as well explore some words associated with the instrument. What can we do with a guitar? Usually бренча́ть [to strum]. But maybe there is a song that you игра́ть перебо́ром play with fingerstyle.

This word means “tuning” when talking about the specific notes that an instrument is tuned to. Са́мый популя́рный строй ру́сской семистру́нной гита́ры, начина́я с са́мой ни́зкой (седьмо́й) струны́ по то́ну: ре, си, соль, ре, си, соль, ре.1The most popular tuning of the Russian seven-string guitar, starting with the lowest (seventh) string, is DBGDBGD. When we are talking about the process of tuning the guitar, we use the word настро́йка (which you may have seen used as the translation for “settings” in your phone or on your computer). The verb is настро́ить/настра́ивать гита́ру.

As you may have noticed, Russians use сольфе́джио solfege to name the но́ты notes, which differs from how we are used to calling them. This is mainly due to the fact that words to describe music in Russian largely came from French. Ля A, Си B, До C, Ре D, Ми E, Фа F, Соль G. “Sharp” is expressed with the word –дие́з (from the French dièse) and flat is –бемо́ль (фа-дие́з F-sharp, ре-бемо́ль D-flat). A scale is known in Russian as тона́льность and can be мажо́р or мино́р. 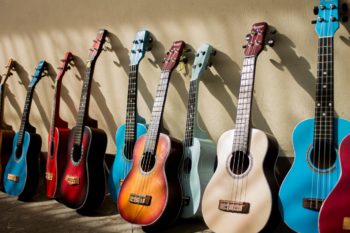 Фото автора Nothing Ahead: Pexels

I don’t have the space to go through all the parts of the guitar, but I would like to tell you the most important parts when playing (or learning to play) your favorite songs. The гриф is the fingerboard. Above it we have the стру́ны strings (sing. струна́). The гриф is segmented into лады́ frets. And now to actually playing:

This is, as you may have guessed, the word for “chord.” The most basic chord is the трезву́чие triad, made from the words три three and звук sound. We can play a song either with a certain бой strumming pattern, or перебо́р fingerstyle.

I will leave you with one of my favorite bard songs, “Москва́ – Оде́сса” by the late great Влади́мир Высо́цкий, whose growling voice and witty lyrics made him one of the most recognizable Russian musical acts of all time. I like this song not only because it mentions cities all over the former Soviet Union, but because of the fast tempo and the message of trying in vain to get where you’re trying to go, as reflected in the last lines of each verse – но мне туда́ не на́до! [But that’s not where I need to go!]

What do you like in Russian music? Do you enjoy the sound of the Russian seven-string guitar? What is your favorite group, band, singer?