Santiago Calatrava and the World Trade Center Posted by Magda on May 20, 2010 in Spanish Culture

Part of the rebuilding project for the World Trade Center includes a new transportation hub for lower Manhattan, known as the PATH station. It is scheduled to be completed in 2013, and the architect in charge is Santiago Calatrava.

Born in Valencia, Spain, Calatrava is one of the most renowned contemporary architects and one of the pioneers of a revival of artistic design in a field dominated by budgets, deadlines, and practicality. He has brought to life a vast number of innovative projects all over Europe and the US. His most recognized work in Spain is La Ciudad de las Artes y las Ciencias (City of Arts and Sciences) in Valencia. This is a complex made up of several buildings including museums, an aquarium, an opera hall, and a planetarium. Other significant works are the Milwaukee Museum, the James Joyce Bridge in Dublin, Lyon St-Exupéry Station, or the Turning Torso in Malmö.

Calatrava is not just an architect. He is also a sculptor and engineer, and draws thousands of sketches for his projects. In his own words, “la arquitectura es una escultura donde se entra” (architecture is a sculpture you can walk into”). This concern with stylistic beauty can be appreciated by observing his bold and ambitious designs. As an artist, he was the perfect choice for bringing a symbolic meaning to the new World Trade Center project. The concept for the transportation hub is a dove being released from a child’s hand. In Calatrava’s mind, the poetic dimension is an essential part of architecture, and this building represents a tribute to the city, to life, a message of peace, and a door open to hope for future generations. 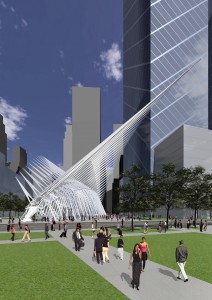 Such a large project couldn’t be without pitfalls. Some of the features have had to be modified to comply with enhanced security regulations in the city, and the budget has ballooned beyond its initial estimation. Some people have criticized Calatrava as a result, but we have to remember that, at the end of the day, the hub will be more than just a station. It will be a work of art. Would you rather see another boring, lifeless, dull building in its place simply because it is more inexpensive? Do we care now whether the Sistine Chapel was completed within budget, or how much the Eiffel Tower cost?
In time, the new WTC will be a landmark for the city, and I’m looking forward to walking into this sculpture one day.