¿Cómo es la comida mexicana? (What is Mexican food?) Posted by sasha on Oct 10, 2018 in Uncategorized

Another prominent ingredient is the chili pepper. In Mexico, you’ll find chili peppers of all varieties – fresh, dried, pickled, and made into powders and sauces. Common peppers include the jalapeño, poblano, and habanero. Mexicans definitely like their food a bit picante (spicy). 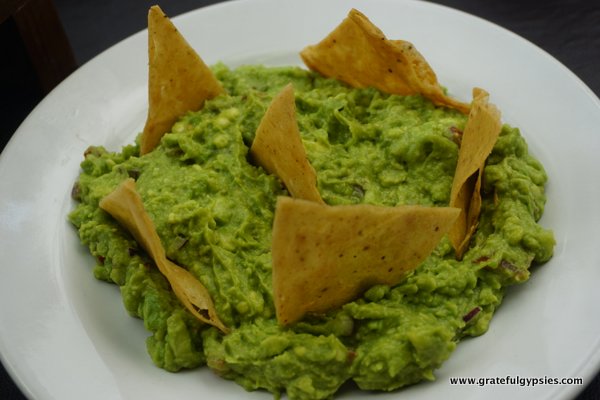 Some of the most common vegetables in Mexico include el tomate (tomato) and el aguacate (avocado). While there are a lot of vegetables used in Mexican cuisine, this a country that definitely loves la carne (meat), whether it’s carne de res (beef), pollo (chicken), or cerdo (pork). There’s also quite a bit of queso (cheese) in Mexican cuisine. 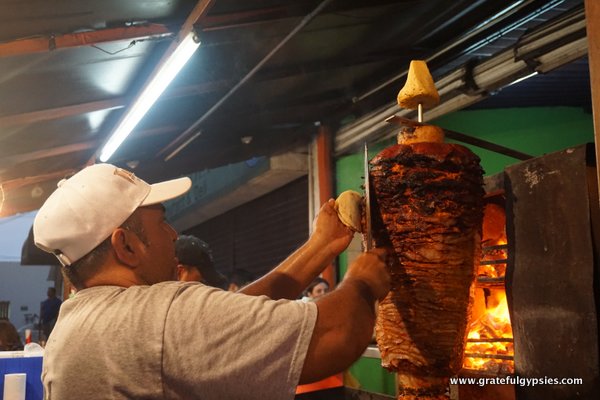 Without a doubt, the most ubiquitous dish in Mexico is the taco. You can find tacos on just about every corner in Mexico. Common fillings for tacos include carne asada (grilled beef), chorizo (sausage), and adobada (marinated pork). You can read all about tacos and learn a lot of useful vocabulary in my post “Me Encantan Los Tacos (I Love Tacos).”

While people definitely eat a lot of tacos in Mexico, there’s far more to Mexican cuisine than just tacos. Here are some photos of a few other common Mexican dishes along with a brief explanation: 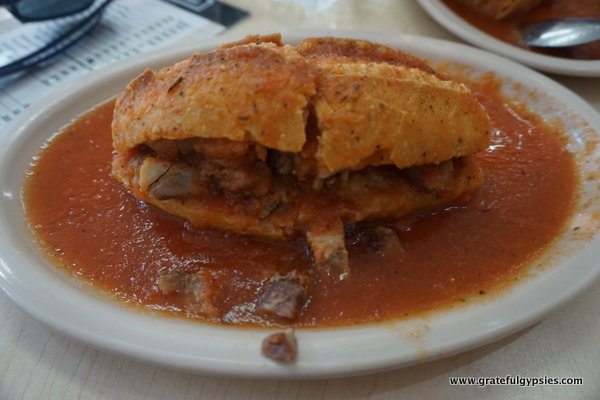 This is a “drowned sandwich” that’s usually made with crispy, fried pork and then soaked in a chili sauce. It’s the specialty of Guadalajara and can be found all over the state of Jalisco. 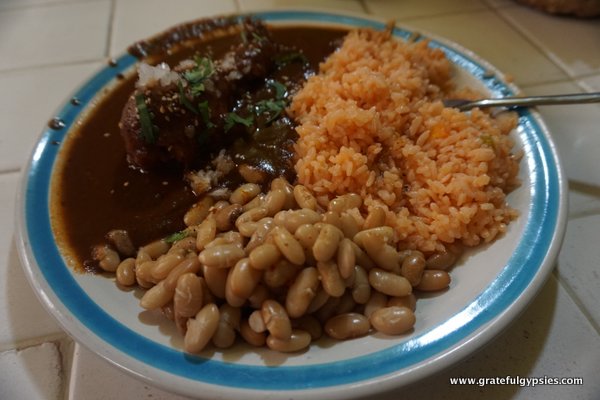 Mole isn’t really a dish in and of itself. It’s a sauce that’s usually made from a mix of chili pepper, fruit, nuts, spices, and chocolate. It’s then used to cook meat and served with typical sides like rice and beans. 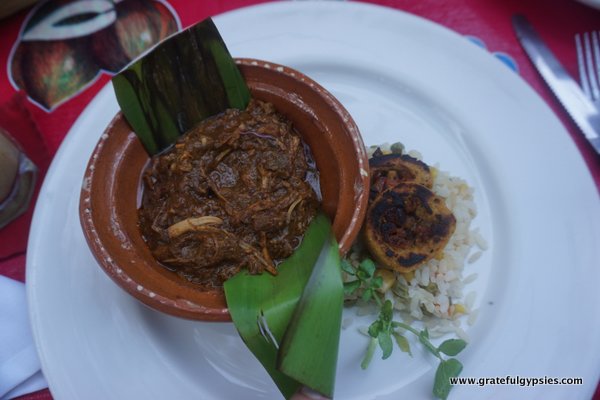 This is a delicious stew that’s most commonly made with goat. It’s cooked for a long time and is thus very tender and juicy. 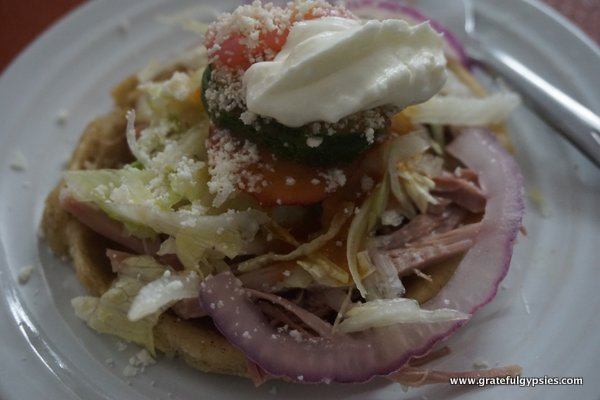 Sopes are a very common antojito (snack) made from a base of fried masa and topped with various things like cheese, beans, veggies, and salsas. 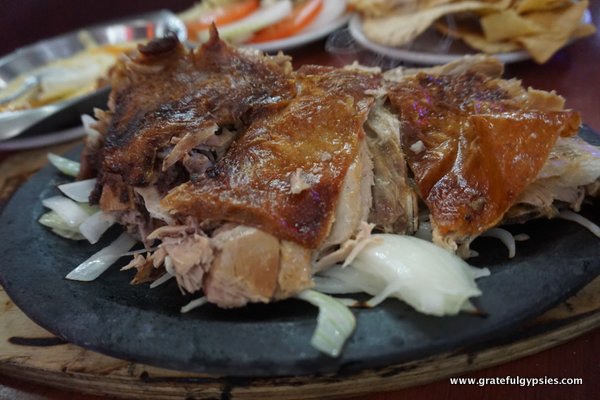 This is roast goat and is the regional special of Monterrey. You order up a plate of the meat with some onions and get all the usual fixings like tortillas and salsas. 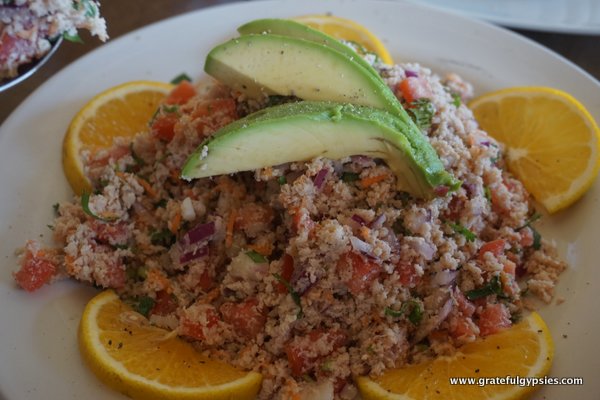 Ceviche in Mexico is made from fresh raw fish that’s diced, cured in citrus juices, and spiced. It’s typically eaten with tostadas and slices of avocado. 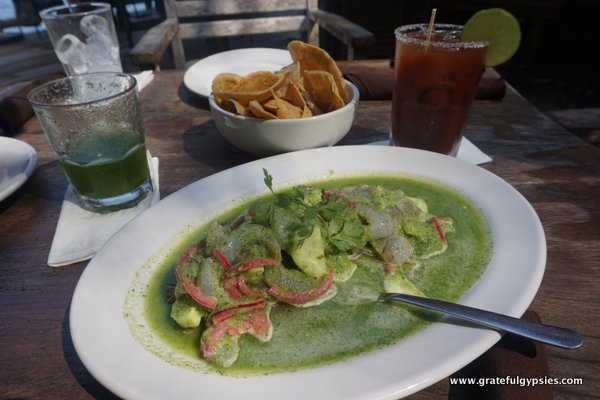 If you like it muy picante, you’ll enjoy a good plate of aguachile. It’s similar to ceviche but its’ shrimp instead of fish, and it’s much, much spicier. 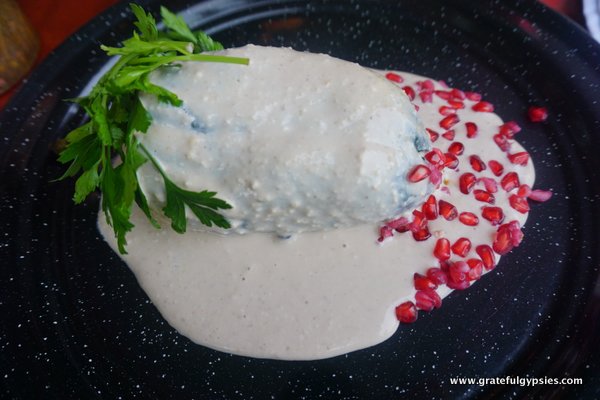 This dish is eaten around Mexico’s Día de la Independencia (Independence Day), as it has the colors of the flag. It’s a poblano chili stuffed with ground meat, topped in a walnut-based cream sauce (nogada) and pomegranate seed.

For breakfast, huevos (eggs) are very common. Some popular Mexican breakfast dishes include huevos rancheros (eggs ranch style) and huevos divorciados (divorced eggs). If you’re wondering where the name comes from, it’s because the eggs are split up – one with red salsa and the other with green. 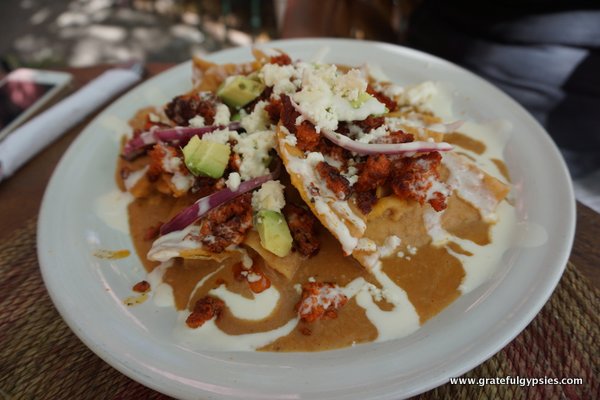 One of my favorite things to eat for breakfast in Mexico is chilaquiles. These are usually made with fried pieces of tortillas from the day before and then covered in beans, cheese, and either eggs or chicken. It’s basically like nachos for breakfast and it’s awesome!

Lunch is usually a big meal in Mexico. Many people like to go to restaurants that serve comida corrida. It’s a set meal with a soup, main course, a drink, and sometimes dessert. You can usually choose between 4-5 different dishes for the main course. It’s really filling and only costs between 50-70 pesos typically.

A lot of people have dinner at home with family members. What’s on the dinner table definitely depends on the region of Mexico and the people who are cooking it. Of course, plenty of people like to go out for dinner, whether it’s at a restaurant or just grabbing some street food like sopes or gorditas. 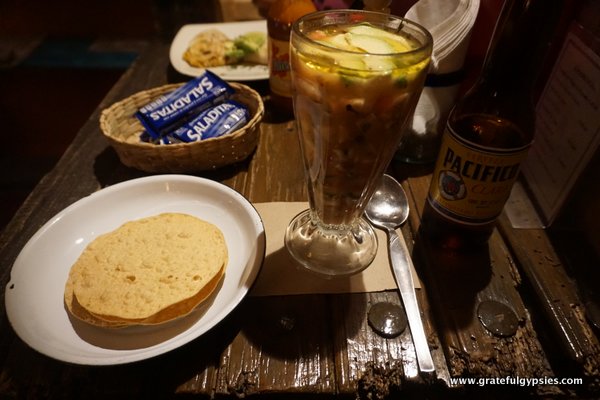 Now I just have one question for you: ¿Te gusta la comida mexicana? (Do you like Mexican food?) Feel free to leave a comment in Spanish and tell us what your favorite Mexican dishes are!