5 essentials of Melodifestivalen Posted by Chelsea B on Mar 3, 2022 in Culture, Living in Sweden, Music, People, Traditions, Vocabulary 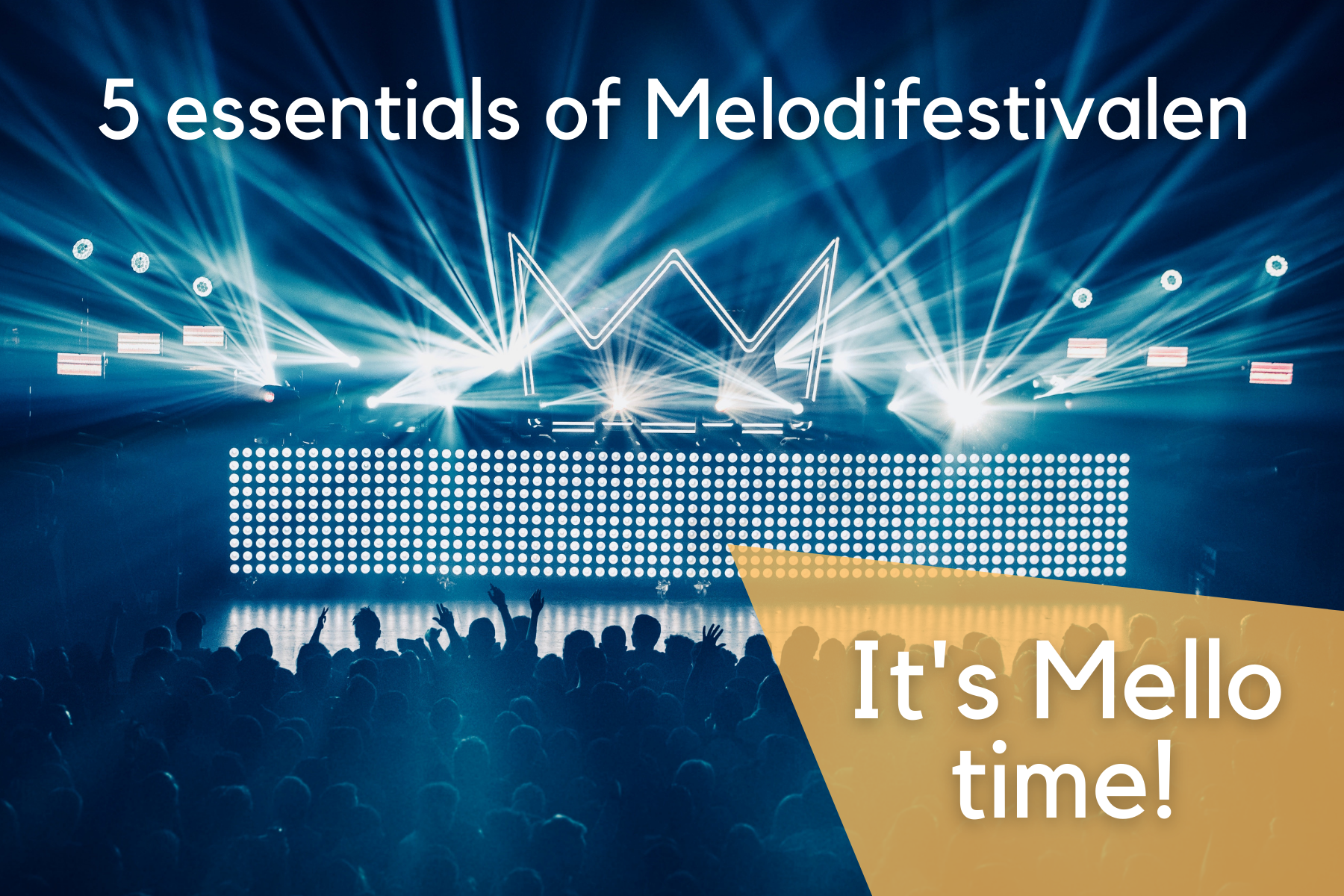 Photo by Wendy Wei from Pexels

Power ballads. Wild costumes. Great production value. Campy humor. Melodifestivalen is here! Each year, Sweden holds a competition to select their entry for the Eurovision song contest. This colossal televised event shakes up Swedish pop culture for several weeks each spring as millions of viewers cheer on their favorite Swedish acts. If you’re into schlager, this is definitely for you. If you don’t know what that is – read on! This week we’ll look at 5 core elements of Melodifestivalen to prep you for the semi-final on Saturday!

Melodifestivalen gets started months before the actual live shows. Artists must submit their bidrag (entry) for review in September of the previous year. From there, a jury selects the top bidrag to enter the competition. At least 10% of the songs must be in Swedish, although the winning songs tend to be på engelska (in English). Typically, English songs have a broader appeal once each country competes in Eurovision.

Song lengths are 3 minutes max and there are other regler (rules) for the music and stage performance. If you are accepted into Mello (slang for Melodifestivalen), you’ll first compete in 1 or 4 total deltävlingar (heats). After the semi-final, and final …it’s off to Eurovision for one lucky bidrag. Each of these events is televised on SVT and runs for a couple of hours.

The hosts of Melodifestivalen are almost equally as important as the songs themselves. They are responsible for introducing the live acts, addressing publiken och tv-tittarna (live audience and at-home viewers), getting backstage interviews, and delivering skits and songs between performances. Swedish singer Oscar Zia is this year’s main host and performed a spoof song and dance called Vilken jävla press (What f***ing pressure) it is to host the contest, which sounds cheesy, and it is, but in the best way, I assure you!

28 deltagare (participants) entered the competition this year. Covering pop-rock, ballads, and even opera, this year’s songs showcase some of the best låtskrivare (songwriters) in Sweden. You’ll notice that some of the bidrag even share låtskrivare. All of this year’s songs are in the spellista (playlist) below. Unfortunately, most of them are in English. BUT, they are a few notable ones in Swedish, including Mello’s 2019 winner, John Lundvik’s Änglavakt. He was voted straight to the final this year!

Who is your favorite? Tell me Mello predictions below in the comments! (I’ll post mine there too!)

Schlager is the European genre best associated with Melodifestivalen and Eurovision. Schlager has a simple pop structure and a happy-go-lucky sort of vibe. This leaves room for acts to be wildly creative and think outside of the box. In recent years, hip hop, reggae, country, and even heavy metal songs have done really well in both Melodifestivalen and Eurovision. Just when it feels like you’ve seen it all on the Eurovision stage, an act will surprise you! Remember Lordi, Finland’s 2006 hard rock winners?

Truth be told, some Swedes avoid Mello like the plague because, let’s be honest, it can be a bit much. But, you can’t argue with Sveriges mest sedda program (Sweden’s most seen program) in history. 2006’s final broke the record with over 4.2 million viewers.

How does voting work? For the deltävlingar and semi-final, artists are awarded points based solely on a public vote. The vote is divided by age group. To mirror the Eurovision voting system, each age group has 12, 10, 8, 5, 3, and 1 points to award to the most popular songs. It was a little weird to see that the 3-9-year-olds have their own voting group, but I guess toddlers know how to text now?

The top two artists from each deltävling, head straight to the final! The 3rd and 4th place songs respectively move to the semi-final.

For the final, the public vote is combined with an international jury vote. Tabulating the votes is dramatic and drawn-out, everyone loves a little suspense though, right?

You can watch back any of the deltävlingar here on SVTplay. Use the same link to watch the semi-final this Saturday, March 5. A week later is the final on Saturday, March 12. Both events broadcast at 8pm CET.