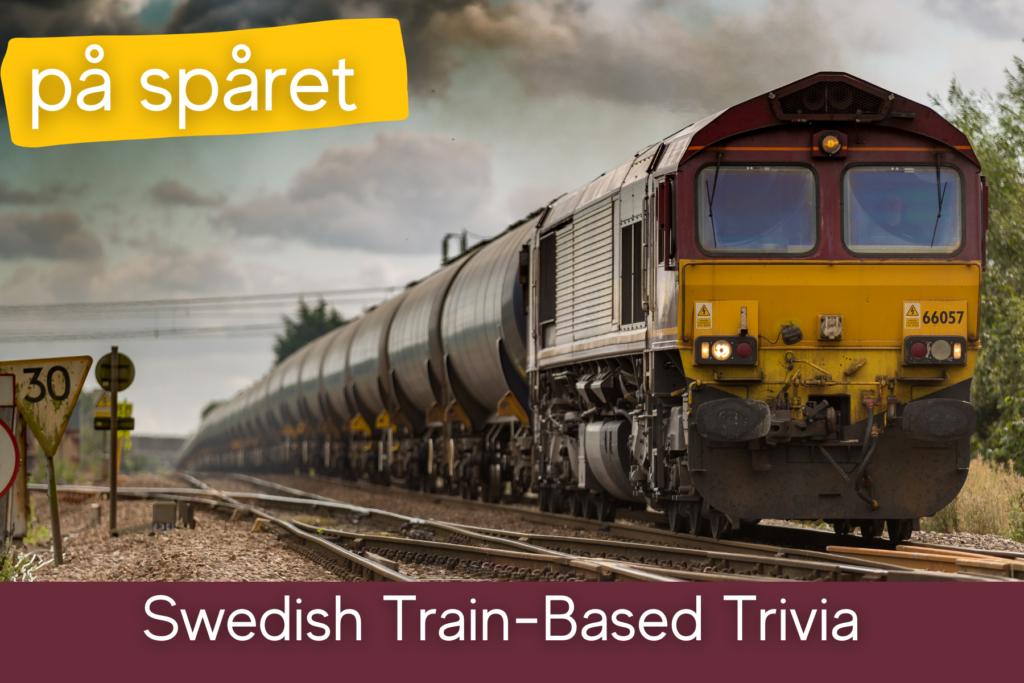 Photo by Ankush Minda on Unsplash

What do Boston, Christchurch and Östersund have in common? They’ve all recently been featured on På spåret, a popular Swedish frågesport (trivia) show! Are you a geography nerd? This charming show is for you!

På spåret (on the track) is one of Sweden’s most popular TV shows and features teams of celebrities competing to answer geography-based trivia. It was originally developed by SVT Göteborg in 1987 and was hosted by Ingvar Oldsberg until 2009, when Kristian Luuk took over as host and Fredrik Lindström as judge.

On the show each week, participants are shown film clips, usually from the front of a moving train, and receive clues from the host in order to determine where they are headed. The clues, which typically feature lots of ordvitsar (puns), start off rather difficult and get progressively easier (with decreasing point values) as they get closer to the destination. Once they “arrive”, the teams are asked wide-ranging questions about their destination which could be anywhere in the world. På spåret also features two musical numbers each episode with corresponding trivia questions. This season has featured a rotating husband (a house band, not a husband!) every few weeks with a diverse range of excellent musical guests.

Vem är deltagarna? / Who are the participants?

In this season, there were nine lag (teams) split into three groups. The lag included a mix of well-known Swedes from idrottare (athletes) to komiker (comedians) to musiker (musicians). Readers of this blog will definitely recognize rapper and author Jason Diakité on the list and likely his partner and good friend, Chef Marcus Samuelsson, too. Unfortunately, the pair just missed making it to the final having lost their semi-final match. The teams who did make it and will compete in the final this Friday, February 25th, are Hanna Hellquist / Ina Lundström and Cecilia Düringer / Jonatan Unge.

In fact, columnist and radio host Hanna Hellquist and comedian Jonatan Unge have met in a trivia competition before – the difference is that previously, they were on the same team! The duo won the show Alla mot alla not long ago, but in the På spåret final, they’ll be facing each other as competitors. Hanna is joined by teammate Ina Lundström, a comedian and host of the pandemic hit podcast Flashback forever. Jonatan’s teammate is Cecilia Düringer, a history teacher and program host. Cecilia and Jonatan handily won all of their matches and even hit a poängrekord (points record) of 51 together this season. They are the storfavoriter (big favorites) to win the finale – but will they?! You’ll have to tune in to find out!

Before you dive into the finale, let’s learn some helpful På spåret vocabulary.

As a non-Swede, it can sometimes be difficult to klura ut (figure out) the destination, as the ordvitsar (puns) can be quite luriga (tricky), and especially so without a deep knowledge of Swedish culture. However, it’s still a fun show to watch and you just might surprise yourself with how well you can do!

Test your geography by watching the finale and all of this season’s episodes here:

About the Author: Liz S

Liz is a Swedish language instructor living in Minnesota, USA. She has degrees in Scandinavian Studies (B.A.) and Second Language Education (M.A.) from the University of Minnesota and has taught English and Swedish to students of all ages in the US and abroad. In her free time, she enjoys reading, hiking, learning Polish and finding ways to make the Minnesota winter more mysig (cozy)!