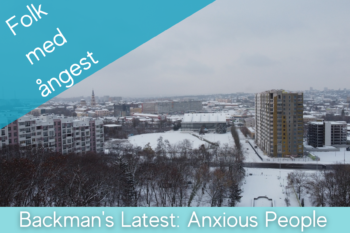 Photo by Dmitry Glazunov from Pexels

January is an ideal month for both bokmalar (bookworms) and sträcktittare (binge watchers), and if you identify as either, this post is for you! By now, you may have heard of the New York Times bestselling Swedish author Fredrik Backman. His debut novel, En man som heter Ove (A Man Called Ove), became an international sensation after its release in 2012 and was followed by a popular movie adaptation in 2015.

In this post, we’ll learn about the author behind Ove, his latest novel, and pick up some handy Swedish vocabulary to go along with the new Netflix series, Folk med ångest (Anxious People) based on his book. Häng med (come along)!

Fredrik Backman was born in 1981, and grew up in Helsingborg, Skåne. He started his career as a journalist for various tidningar (newspapers/magazines) before debuting with En man som heter Ove. Since then, he has written five more novels, two novellas and one nonfiction book, and his work has now been published in over forty countries. Several of his books have also been adapted into films or television shows including En man som heter Ove (A Man Called Ove), Britt-Marie var här (Britt-Marie Was Here) and Björnstad (Beartown). Despite all this success, he still lives a quiet, unflashy life (like many Swedish celebrities!) with his wife and two children in Stockholm.

What makes his writing so popular?

In an interview with the Swedish magazine Vi läser, Backman said that he is “helt och hållet känslostyrd” (totally steered by his emotions). He cites authors Astrid Lindgren and Selma Lagerlöf as his literary role models, and just like them is interested in closely examining humanity’s emotional depths. He treats all his characters with empathy, even the ones who seem “unlikeable” at first glance. In the same interview, Backman remarks that he tends to agree with a friend’s summation of his writing style as presenting a character’s absolute most irritating personality traits in the first chapter, and then spending the next 350 pages trying to defend them. The interviewer, Klas Ekman, concludes that a Backman book is as emotionally pricksäker (spot-on) as a Pixar movie – the reader laughs and cries in exactly the right places.

So, are you already on team Backman, or do you still need some convincing? In either case, read on to find out about his latest hit.

Backman’s latest, Folk med ångest (Anxious People), was published in 2019 (Swedish) / 2020 (English). In theory, the novel is a pusseldeckare – a locked-room mystery at a Stockholm apartment showing involving a failed bank robber who inexplicably vanishes into thin air and eight strangers who are thrown together as hostages. However, it quickly becomes apparent that that the mystery is incidental to Backman’s true motive. He is much more interested in plumbing the depths of the characters’ anxieties and revealing the connections that bind them together despite their differences. Over the course of the novel, the reader realizes that each of the characters is not who they initially seem to be, in true Backman style.

The bestselling book was recently adapted to a Netflix series which debuted on December 29, 2021 to mostly positive reviews. The Swedish newspaper Dagens Nyheter called it “en sorglös serie att sträcktitta på” (a carefree series to binge watch), perfect for this month. Will you be able to solve this pusseldeckare? Will it even matter in the end?  Find a handy vocabulary list below and check out the book or the show to see for yourself!

About the Author: Liz S

Liz is a Swedish language instructor living in Minnesota, USA. She has degrees in Scandinavian Studies (B.A.) and Second Language Education (M.A.) from the University of Minnesota and has taught English and Swedish to students of all ages in the US and abroad. In her free time, she enjoys reading, hiking, learning Polish and finding ways to make the Minnesota winter more mysig (cozy)!