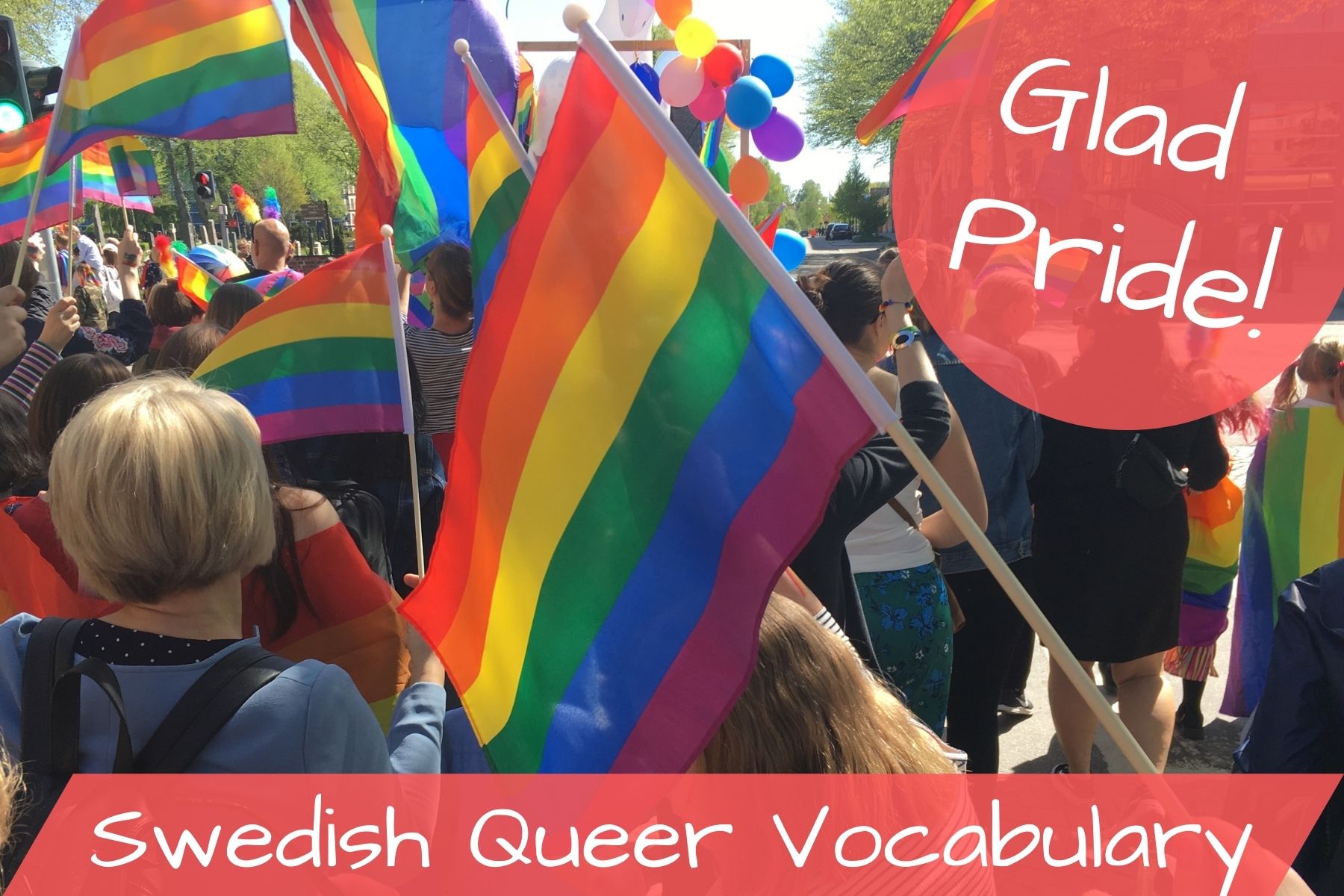 June is recognized as Pride Month all around the world. With Sweden’s long progressive stance on gay rights, it’s no surprise that Swedes host more Pride celebrations per capita than any country in the world. From rainbow-painted park benches and crosswalks in cities like Malmö and Göteborg to the Stockholm Pride parade drawing half a million spectators, Swedes, for the most part, totally embrace Pride. Therefore, this week’s blog is going to cover some queer vocabulary around sexual orientation, gender identity, and pronouns!

Now, before we get started, this blog is by no means a comprehensive list of queer Swedish vocabulary. The idea here is simply to cover some basics that can help us be more mindful Swedish speakers.

Homosexuell → homosexuellt → homosexuella is used in Swedish to describe someone who is attracted to someone of the same gender. But, just as in English, this term can feel a bit stuffy in day-to-day use so most folks use gay or queer. Remember my blog post about Darin and Princess Victoria winning HBTQ of the year at Gaygalan?

The terms gay and queer mean the same thing in English as they do in Swedish. A gay person is attracted to someone of the same gender. Queer is more of an umbrella term that means you’re breaking norms in either sexual orientation, or gender identity, or both! You can get pretty far with using both as adjectives in Swedish. For example:

Queera works well as a plural, too. If you’re a gay woman, you are lesbisk. This adjective can be used as ett-form: lesbiskt and plural form lesbiska. In noun form en flata → flator are synonyms for lesbian → lesbians. On the other hand, en bög → bögar is used for gay men. Although these terms are totally fine for all people to use colloquially, gay is a less-loaded term that can be used in any situation.

This is the Swedish equivalent to LGBTQIA+. All of these words are cognates to their English equivalents so if you need to brush up on these terms in English, too, here’s your chance! (Again, VERY basic definitions here.)

These first two terms refer to sexuell läggning or (sexual orientation = who you are attracted to!).

homosexuella – homosexual, we’ve got this one covered already, right?
bisexuella – bisexual folks are attracted to both genders (in a binary sense)

The next two terms refer to könsidentitet (gender identity= the gender that a person most relates to).

transpersoner – transgender people, often folks whose gender identity differs from the one they were assigned at birth

The “i” in HBTIQA+ can also stand for ickebinära, folks who don’t identify with any gender

…and the plus? The plus is there to always include others who don’t feel they identify with the categories above.

It’s tough to identify a person’s gender just by looking at them, so learning their preferred gender pronoun is a way to recognize them accordingly. We know the Swedish binary pronouns han (he) and hon (she), but what about gender-neutral pronouns? In English, the pronoun “they” is used as a neutral pronoun to describe a singular person. In Swedish, the equivalent is hen, or den. These pronouns can be used to refer to trans or genderqueer people, but it’s also pretty handy if you’ve never met the person before or are unsure of their gender. For example:

It’s becoming more common to ask someone for which pronouns they use or prefer. In Swedish, you can say:

-Vilket pronomen vill du att jag ska använda?
-Which pronoun do you want me to use?

That’s all for now, folks! Feeling refreshed on your queer terms? Want to expand your knowledge? See below!