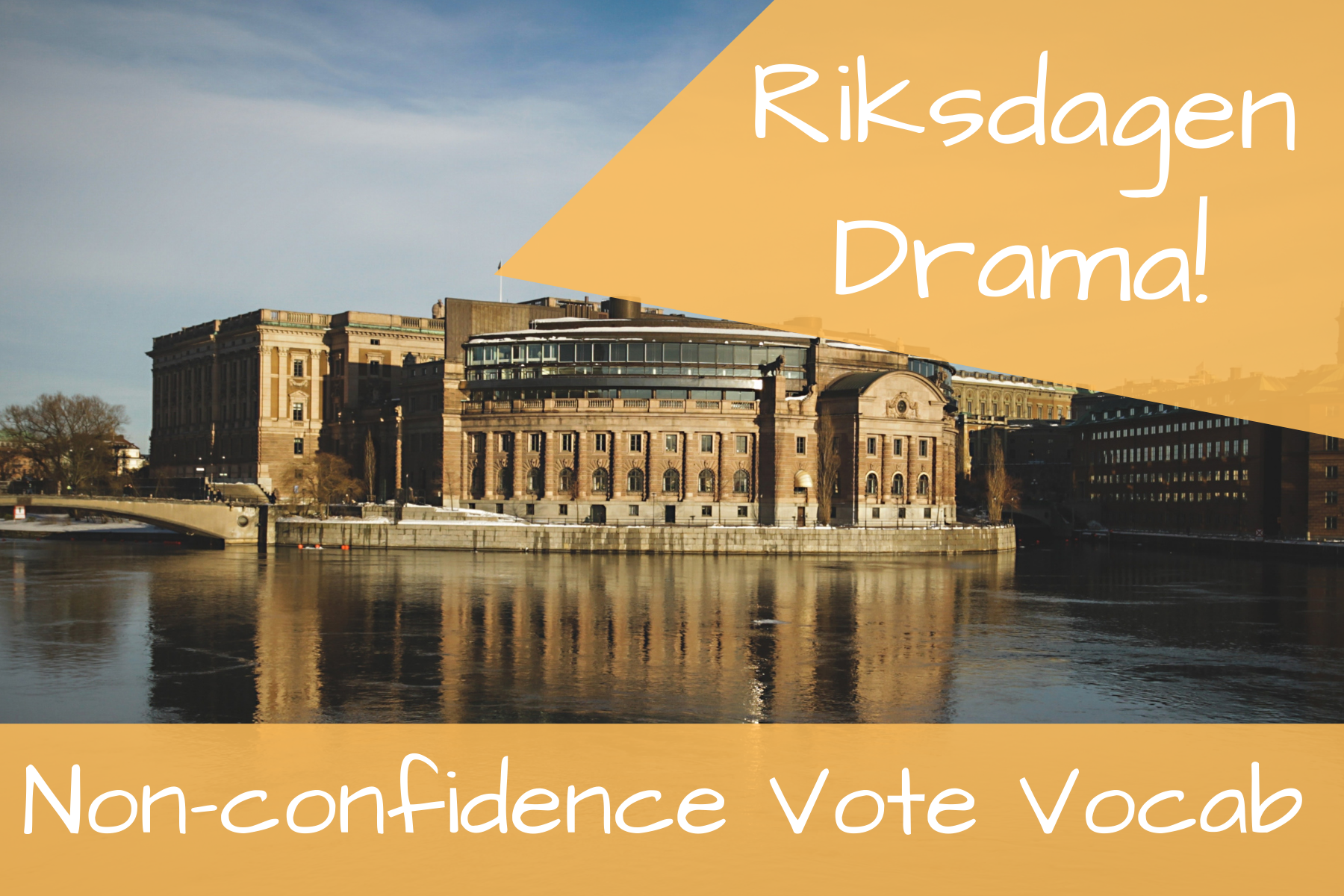 Photo by Michael Erhardsson from Pexels

Tensions rose earlier this week as the Swedish parliament made history. They voted to oust Stefan Löfven, current Prime Minister and party leader of the Social Democrats. The hot topic? Rent control. With only a few days left to plan his next move, and the Swedish government in a shaky position, what better time than now to brush up on politics?! This week, we’ll cover the vocabulary center to the non-confidence vote that took place Monday, and meet some of the main characters in this policy drama.

Let’s set the stage a bit – Sweden is a konstitutionell monarki (constitutional monarchy). The king serves as the head of state but has little political power. The 349 members of riksdagen (parliament) are the ones running the show, tackling the national legislature. Current parliamentary members are from 8 main partier (parties) who work together to form coalitions and voting blocks.

Regeringen is the Swedish noun for “the government.” In this context, regeringen also refers to the current ruling government, the coalition that the prime minister has built. Misstroendeomröstningen (the non-confidence vote) was passed by 181 representatives who voted against Löfven’s regering. Ready to meet some of the main characters of this political scandal?! Nu kör vi!

Stefan Löfven is the partiledare (party leader) for the Socialdemokraterna – S (Social Democrats). The Social Democrats are credited for founding Sweden’s welfare system and were the dominant party in Sweden for decades. Typically in the middle left of the political spectrum, this party has long seen declining popularity. Löfven was appointed statsminister (prime minister) of Sweden after the 2014 election, when he formed a minority regering with the Green Party.

Annie Lööf is the partiledare for Centerpartiet – C (Center Party). The Center Party has been in coalition with S and thus abstained from the voting on Monday. Centerpartiet was in favor of removing rent caps for residents in apartment buildings in order to encourage developers to invest in new housing. They argue that the bostadskris (housing crisis) in large cities could be solved but that developers are scared to invest in buildings where they can’t control the price of rent themselves. Lööf says that issue is off the table for now after Monday’s vote.

Nooshi Dadgostar is Vänsterpartiets – V (Left Party) partiledare. Vänsterpartiet is a left-wing party that the Socialdemokraterna have depended on for the majority vote. But when the current regering brought up the long-debated topic of hyressättning (rent pricing), Vänsterpartiet was not cooperative. V believes that removing the cap on rent will skyrocket rent prices in an already competitive environment. Days before the vote in parliament, Dagdostar threatened to pull support and dismantle the current government. And that’s exactly what happened.

Jimmie Åkesson is the partiledare for the nationalist party Sverigedemokraterna – SD (Sweden Democrats). He comes into play here because his party called for the actual vote to take place. Interestingly here, we see the right and left sides of the political spectrum in alignment as SD and V both voted against Löfven. Although, V’s Dagdostar had made it clear that her party would not allow for a right-wing government majority to form.

The irony is that Stefan Lofven himself is not in favor of removing the rent cap, but his party is. So, Löfven takes one for the team and becomes the first prime minister to lose such a motion from riksdagen. According to Swedish law, Löfven has 1 week to decide whether a new election will happen in September or he’ll ask the talman (government speaker) to form a new government in the meantime. Looks like there won’t be much midsommar fun happening for the scrambling S-parti this weekend. Tråkigt!

This incident has become world news, so it won’t be too difficult to find a news source to follow along. For political news på lätt svenska (in easy Swedish), 8sidor.se’s Alla väljare is your guide.