Mushroom picking Posted by Tibor on Sep 17, 2018 in Culture

There is a collective mushroom picking craziness going on from middle of August until mid September usually. It depends on the weather really and this year the mushrooms seem to come a bit later because of the dry summer we have had in Sweden this year as I mentioned in my post about the crayfish party. There are plenty of mushrooms to pick mostly Karl Johan (Porcini), Yellow Chantarelles  aka Skogens guld (the gold of the forest in Swedish) and the so called Tratt-chantarelles (Funnel Chantarelles) aka. Trattisar in Swedish. You can pick loads of other edible mushrooms in the Swedish forests but I wouldn’t personally recommend you to pick on your own since there are some poisonous ones as well.

I would recommend you to take a mushroom picking course first and go a few times with someone who is an expert at mushroom picking. Slowly but surely you will learn how to pick the right mushrooms. 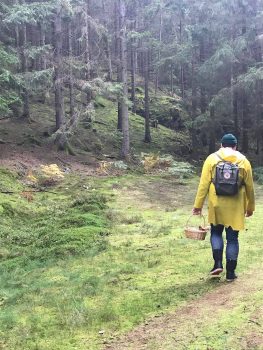 You can cook or dry porcinies and the yellow chantarelles I would cook and put them in the freezer. The yellow ones are great on toast with a bit of garlic and parsley. When it comes to funnel chantarelles I would cut them into two pieces in the middle and just dry them either on a newspaper or in a dryer that you can for example buy at Clas Ohlson.

I would also recommend that you buy a mushroom knife when going to the forest. You can cut off the end of the foot that is in the ground so you don’t have to clean the mushrooms later at home that much. Because it takes time man! Oh and have a small brush for the cleaning. You don’t want that crunchy dirt in your mouth. You will also need some lite baskets. Don’t use plastic bags because the mushrooms gonna start rotting in the steamy bag.