The Swedish Kitchen Series: Grillfest Posted by Chelsea B on Apr 29, 2021 in Culture, Food, Swedish Language

The snow’s gone, the trees are starting to bud, vaccines are rolling out, kan vi ha en grillfest nu då?! A grillfest is the Swedish equivalent of a barbecue. With the Swedish spring festival Valborg happening this week, you can bet that Swedes will be christening their grills for the season. This week we’ll pay tribute to the grill debut with chapter 3 of Svenska institutet’s “Det svenska köket.” Pick-up a few recipes and ready your charcoal, let’s roll! 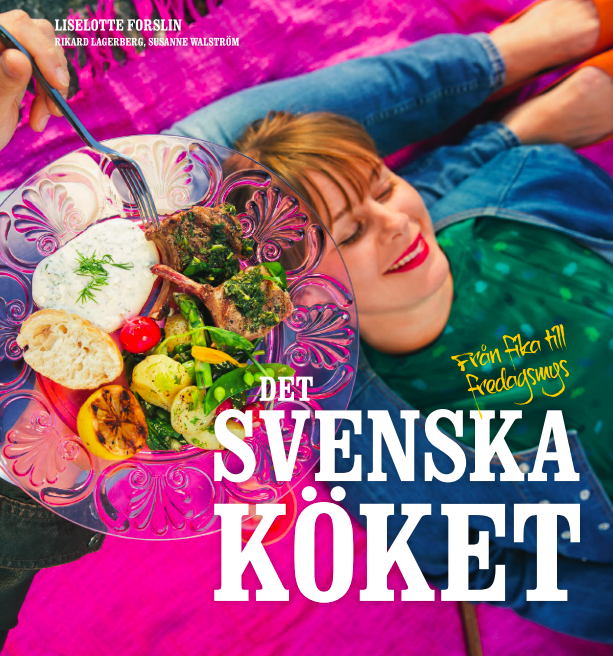 Our verb of the day is an important, but basic one:
att grilla (to grill) and it’s conjugated like this:

Har du grillat fisk innan? Jag skulle vilja testa det!
Have you grilled fisk before? I would like to try it.

Swedes grill with charcoal or gas grills, sometimes even over an open fire. In the summertime, it’s popular to gather a group of folks together and grad an engångsgrill/ar. This word translates to “one-time grill” because it’s disposable after one use. These nifty aluminum foil grills come with charcoal, are easy to light, and can turn anyone into an instant grill master. Engångsgrillar can be purchased at any corner or grocery store depending on the time of year. Although folks are starting to frown upon using these grills because they’re quite wasteful.

This chapter of Det svenska köket features lammracks med örtolja (rack of lamb with herbed oil) as the protein of choice.

“Lamb is perfect for grilling. Together with a good herby oil, no marinade is needed.”

This recipe is completely in Swedish, so you have the opportunity to learn some new nouns, like the lamb’s best friends, rosmarin och mynta (rosemary and mint). Olivolja (olive oil) is another essential noun to memorize, I cook with it every day!

Any verbs in these recipes are written in the imperative, or command form. Step one is “förberred en fin glöd, “(prepare a some nice coals).”
You also see these verbs in command form:

To accompany this grilled rack of lamb, there is a recipe for krämig kall sås that could work for red meat, chicken, or fish. Crème fraîche with a bit of mayonnaise is the common base for many creamy Swedish sauces. Add a bit of mustard, dill, and a pinch of salt, and call yourself the Swedish chef. 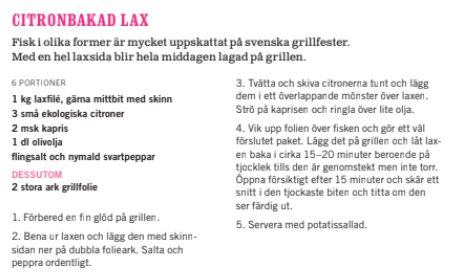 “Fish in various forms is a much-appreciated addition to the Swedish grill party. With one whole side of salmon, your entire dinner is cooked on the grill.”

Classic salmon, prepared with lemon, capers, salt, and pepper. Mmmm, vad gott! Notice that step 5 in this recipe is servera med potatissallad (serve with potato salad).
Let’s look at that recipe, next!

“This lovely potato salad with fresh greens works wonderfully with anything grilled. It can be prepared ahead of time if you’re not planning to grill at home.”

The veggie-heavy potato salad has ett knippe rädisor (a bundle of radishes) and ett knippe asparagus… but don’t forget to add the majonnäs, of course.

Then you’ll want to get chefy with your vocab in order to talk to your Swedish pals about what you did to prepare your meat. Did you bräsera (braise) it for hours or tranchera (thinly slice) it before serving? Swedish grocery store giant Coop has a vocabulary list for the more technical side of meat cookery. See it here!

Do you plan to try any of these recipes? Let me know which in the comments below!

Want more from “The Swedish Kitchen Series”? Check out these posts!