Jungle Trekking in Chiang Mai Posted by sasha on Jul 13, 2016 in Uncategorized

There’s much more to traveling in Thailand than relaxing on sandy beaches. Thrill seekers will be excited to find out that there are countless opportunities for adventure in the Kingdom of Smiles. From scuba diving at epic sites like Sail Rock, to tackling the 1,864 curves of the Mae Hong Son loop on a motorbike, there’s enough to do to keep you busy for your entire trip. Of all the adventures on tap in Thailand, it’s hard to beat embarking on a multi-day jungle trek outside of Chiang Mai. Visit remote villages, learn about the people and the land, jump into waterfalls, ride elephants, and so much more. Here are some highlights of a 3-day trekking trip through the Thai jungle: 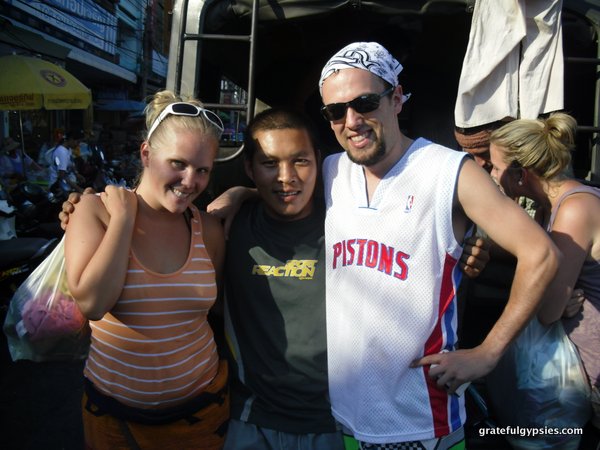 Us with our guide, Book.

Our leader for the trek introduced himself to us with his English name – “Book… like the Jungle Book.” He was all smiles and full of jokes, and from the very beginning we knew we were in for an exciting adventure. 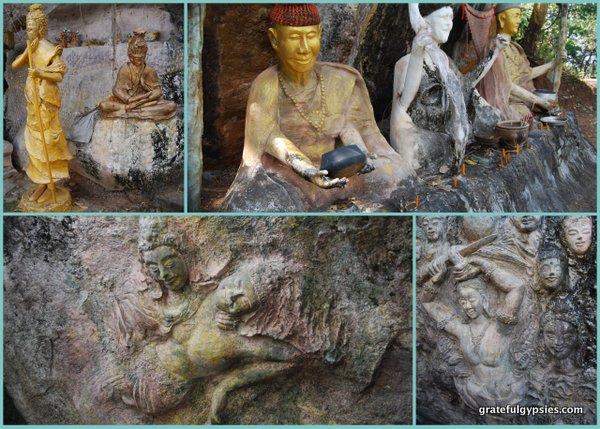 First up for our three day trek, we visited a hilltop temple, which featured beautiful Buddha carvings in the rocks, a variety of interesting statues, and a massive sitting Buddha on the top of the hill. Not only that, but we were treated to stunning views of the Thai countryside. 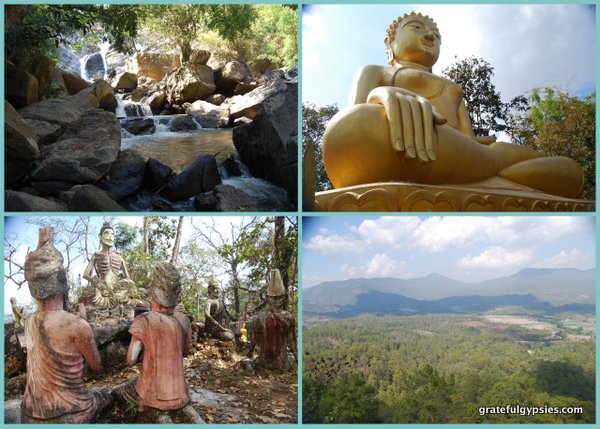 A giant Buddha and amazing views. 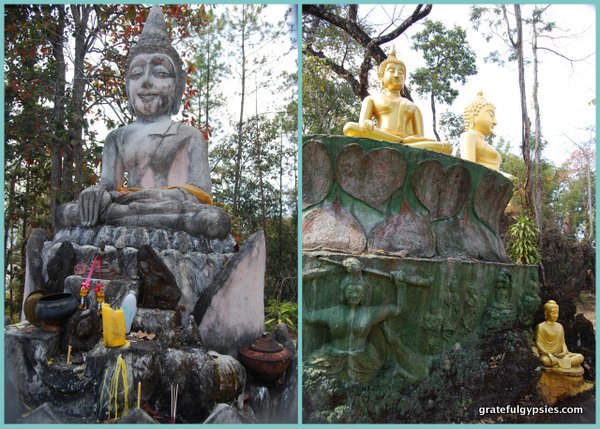 We kept on walking, stopping now and then to get a lesson from Book on jungle survival. For example, he told us about a particular root that grew out in the jungle. No matter how hard you try to keep it down, this root springs back up. Due to the root’s strength and refusal to go down, Book told us that Thai men would often eat it as a sort of “male enhancement” for strength and virility. Throughout the trek, Book was full of interesting factoids, as well as plenty of hilarious jokes and shenanigans. His great sense of humor made the trip that much better, and he will go down as the greatest tour guide I’ve ever had without a doubt. 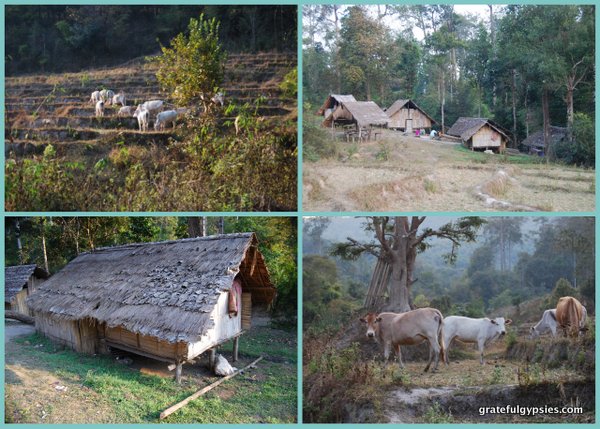 Home for the night.

As the sun went down, we approached a tiny jungle village where we would be spending the night. Book and a few of the locals went to work cooking up a big vegetable stew with rice, while us visitors relaxed our tired feet and enjoyed some cold Chang beer. We sat down to a big group dinner, sharing stories and jokes, and then we lit up a campfire to warm things up a bit. A bottle of Thai whiskey and an acoustic guitar got passed around, and we spent the night singing and drinking under the stars. As for our accommodations, we all slept together on a straw mat in one of the huts, under the protection of a massive mosquito net. 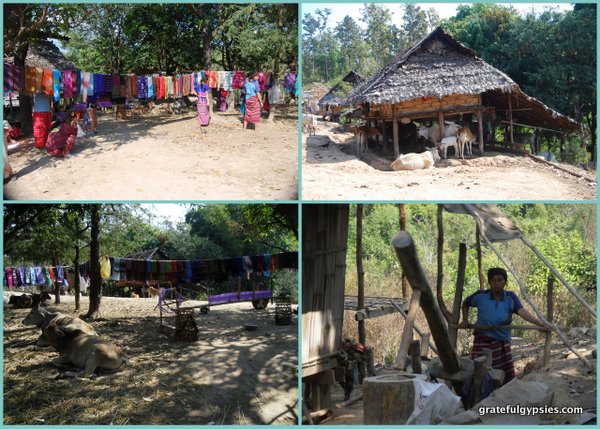 Throughout the morning, Book continued to regale us with tales of his life, mixed in with plenty of jokes and useful tidbits of information about the jungle and everything in it. After a few hours of walking, we stopped at yet another scenic waterfall to enjoy our picnic lunch. Further on down the trail, we stopped in another village, inhabited by people of the Karen hill tribe. The women of the village were at work stitching and weaving colorful scarves (which were, of course, available for purchase), and cattle, hogs, and chickens were wandering around the village, or laying down and relaxing. Book told us the story of the Karen tribe, and how they came to Thailand and eventually became Thai citizens. However, the language that they speak is quite different from standard Thai, and Book told us he could not understand their dialect, but that they could speak good enough Thai to communicate with him. 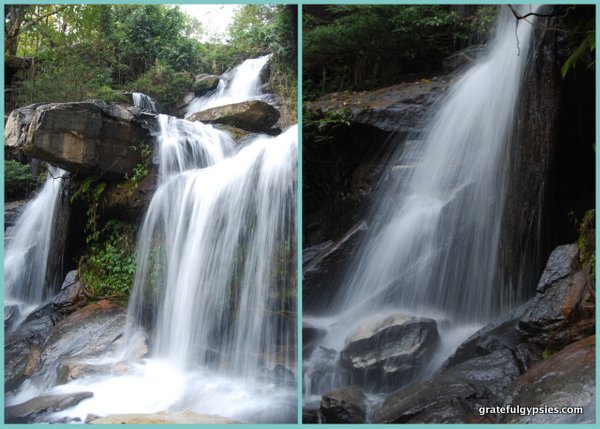 Cool off with a swim.

After a short stay in the Karen village, we got back on the trail and kept the hike going. We walked for a few hours until we came to a little waterfall and swimming hole. As it was a pretty hot day and we had been hiking for a good five hours, we were thrilled to have a chance to jump in the water and cool off. The water was icy cold, and it was just what we needed to break up the long day of hiking in the heat. 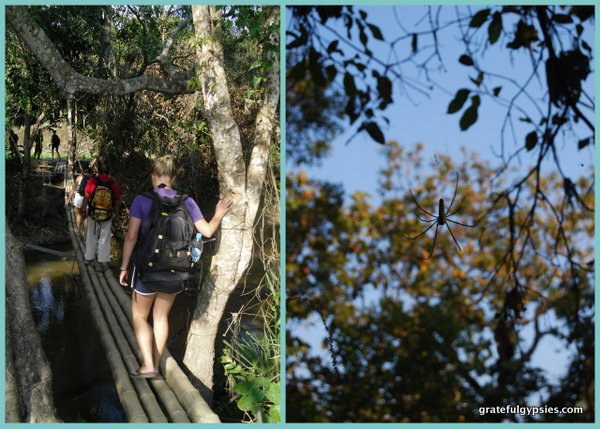 Crossing a bridge and a freakishly large spider.

Nice and refreshed after our swim, we hit the trail again, bound for another village where we’d be staying the night. We arrived late in the afternoon, with plenty of time to enjoy the peace and quiet of the countryside before the sunset. We sat outside and swapped travel stories while the locals picked papayas off of tall trees. 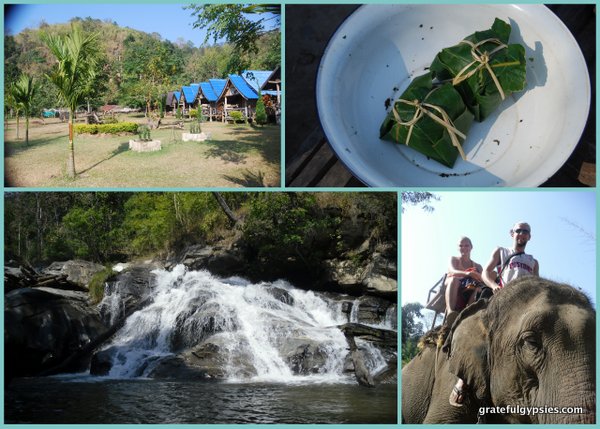 A few more scenes from our jungle trek.

For our last day in the jungle, we started out with a short hike to catch a ride… on elephants. With three people per elephant, I was volunteered to sit up front on Dumbo’s neck. This made for an interesting ride, especially when it tried to venture off into the trees in search of food. Thankfully, there was a guy guiding the elephant from behind to ensure that we did not wander off into the trees. In the years since we did this trek, we’ve learned a lot about elephants and their treatment in Thailand. While it’s exciting to get up close with the elephants, many are mistreated and abused. Before signing up for an elephant adventure, read this post about how to make the right choice. 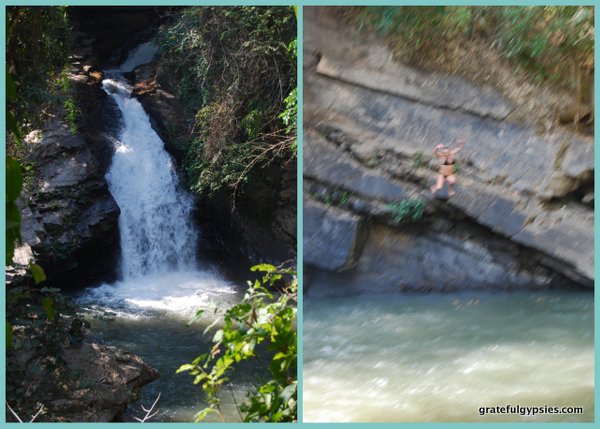 Jumping into waterfalls – just another day in the jungle!

When we arrived at our destination, we hopped off the elephants and walked onward to another waterfall. This time, cliff jumping was an option, with two different jumps – a little high and really high. Book wasted no time in leaping off of the smaller one, and I had no trouble following. The higher jump, however, was a different story. Having taken the plunge several times before, Book casually leaped off of the rock and into the water. Looking down at the jagged rocks directly below, I had a little bit of trouble taking the leap. I eventually came around, and while the jump was exhilarating and tons of fun, an awkward landing ensured that my ears would be full of water for the next two weeks (thankfully over the counter antibiotics and pain killers were available back in the city). We finished up our three-day adventure with a trip down a little river on bamboo rafts. It had been an amazing experience, to say the very least, and it was easily the highlight of our month long stay in Thailand. Back in Chiang Mai city, we bid farewell to our new friends and headed out to roam the streets.

We signed up for our trek through the Tourism Authority of Thailand (TAT) as part of a bigger package including train tickets and a few other excursions. Based on our positive experience, we can definitely recommend using their services. It’s not difficult to join in a trekking group in Chiang Mai, though – just about every travel agent can help you out.