Meena Kumari (مینا کماری), born Mahjabeen Bano (ماہجبین بانو) on August 1, 1933, is recognized today as one of the finest actresses the Hindi film world has ever known. In addition to her stunning beauty, this actress was famous for her multifaceted talents as an actress, singer and poet who published verse under the pen name “Naaz/ناز” (“Coquet”). Although she was popularly known as the “Tragedy Queen” for her difficult personal life and sensitive portrayal of star-crossed heroines in films, she played a wide variety of roles, managing to star in a staggering 92 films even in a brief career of only 33 years. She was immensely successful as an actress, winning the first Filmfare award ever bestowed for “Best Actress” for her work in the 1954 film Baiju Bawra (بیجو باورہ). The very next year, she won the same award for her title role in the film (پرینیتا) Parineeta. 1963 was a landmark year for her as she received ALL of the Filmfare nominations for Best Actress and went on to win still more “Best Actress” awards for her performances in Kaajal (کاجل) in 1965 and Sahib, Bibi Aur Gulam (ساحب بیبی اور غلام) in 1966. 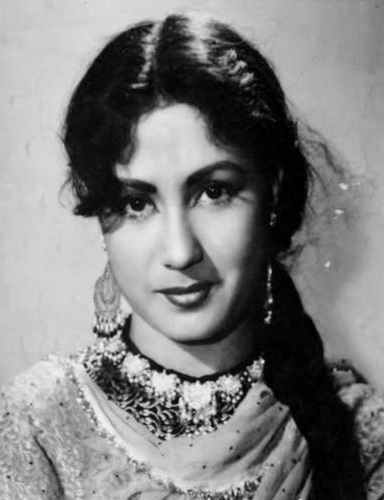 Her father was a Sunni Muslim music director by the name of Ali Bux who hailed from Bhera (now in the Pakistani region of Punjab) and her mother, Iqbal Begum (original name: Prabhawati Devi), who was related to the Tagore family, was an actress and dancer who converted from Christianity to Islam to marry Meena’s father. Yet, despite her parents’ talents in the arts, Meena was born into an impoverished family and was introduced to the film world at the age of 4 so that she could begin earning money. Regardless of Meena’s stated wish to pursue her schooling, her parents wanted her to be in films, and thus her career started when she made her debut in Vijay Bhatt’s Leatherface (1939). As a child actor, she starred in a number of films, most of them Vijay Bhatt productions, and it was during this phase of her life that Bhatt gave her the stage name “Baby Meena.”

Her first film as an adult, in which she was cast under the name “Meena Kumari,” came with the 1946 production Bacchon ka Khel/بچوں کا کھیل (A Children’s Game). Yet, her breakthrough role came later, in 1952, with Vijay Bhatt’s Baiju Bawra. On the set of another film in which she starred, Tamasha/تماشا (A Spectacle), she was introduced to her future husband, Kamal Amrohi. After their meeting, Amrohi decided to offer her the lead role in his new film Anarkali (انارکلی), and she agreed. However, two months later, Kumari was involved in a car accident that left her with a permanently disfigured pinky finger on her left hand. It was while she was convalescing in the hospital that her romance with Amrohi began as he visited her there often and the two started writing letters to one another. 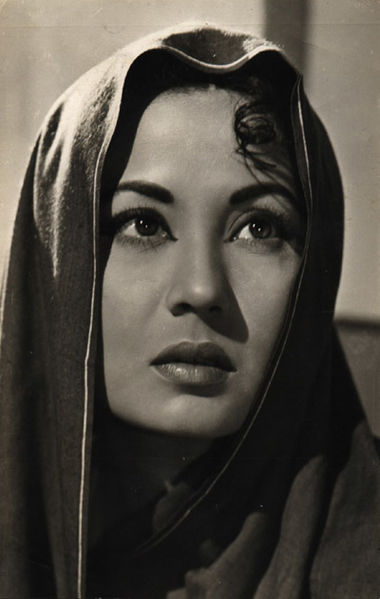 Image by Bolskaya on Wikimedia Commons; licensed under CC BY-SA 4.0.

In 1952, unbeknownst to Kumari’s father, with whom she still lived, she and Amrohi got married in a “niqah” (بکاہ, or simple Muslim marriage ceremony) ceremony with a qadi (قادی, a Muslim judge who interprets and applies Islamic law or Sharia) and Kumari’s younger sister serving as officiant and witness, respectively. However, the truth was that Amrohi was already married at the time and had three children by his first wife. Later, when Kumari’s father found out about the secret marriage from an eavesdropping servant, he expressed his disapproval and discouraged his daughter from acting in Amrohi’s films; initially conflicted, Kumari later rebelled against her father and decided to act in Amrohi’s film Daera/داےٴرہ) (1953), causing her father to close the doors of the family home to her. Her relationship with Amrohi, however, was deeply troubled, and the two separated in 1964.

Regarding Kumari’s verse, a facet of her personality and life that few are well-acquainted with, scholars Philip Bounds and Daisy Hasan write that, “poetry was the medium through which Kumari distanced herself from her public image and criticized the industry that had brought her to public attention in the first place. In that sense, her poems tell us as much about Bollywood as they do about herself.” As a woman forced to become an actor at the age of 4 to help lift her family out of poverty, it is understandable that Kumari would have an ambivalent attitude toward the film industry, which was often cruel, cutthroat and exploitative, especially in its treatment of female stars. Despite her success in this industry, Kumari, a sensitive, vulnerable, learned woman and autodidact with numerous talents, met her downfall due to her association with it: she died at the young age of 33 on the 31st of March, 1972 of liver cirrhosis. Fortunately, she left behind echoes of her sensitive and emotive spirit in a book of her poetry compiled by her friend, fellow poet, lyricist and director Gulzar, after her death, entitled Tanha Chand/تنہا چاںد (The Solitary Moon). 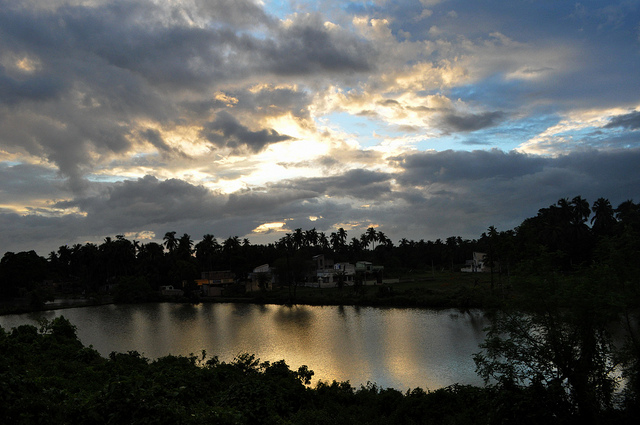