In learning another language, one good thing about prepositions is that they are limited, i.e. belong to a closed class of words, just like pronouns. Besides, in the case of Arabic, they are simple when conjugating them with pronouns (i.e. appending pronouns to them). There are seventeen prepositions in Arabic. Here, we look at the Top Five, namely how they are combined with pronouns and their pronunciation when followed by definite nouns. 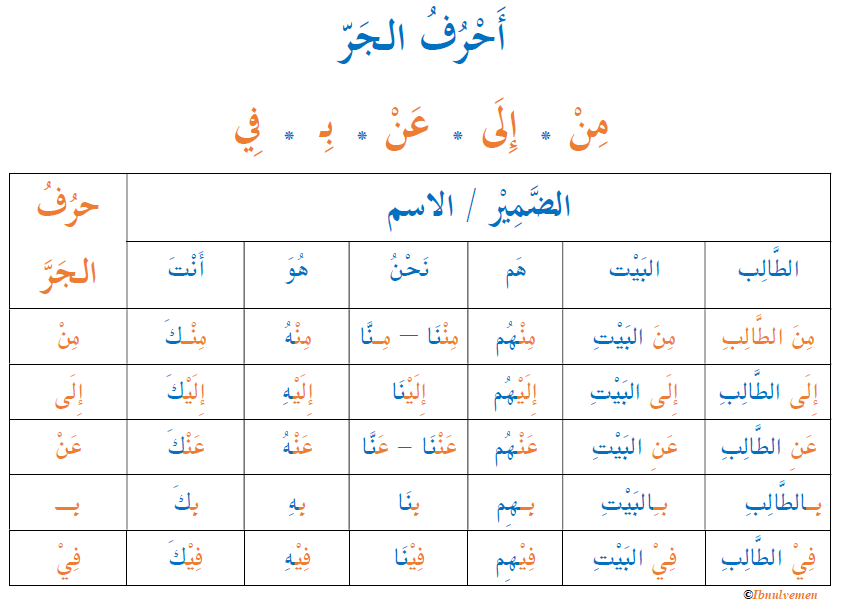 With respect to their meanings, they may have multiple meanings depending on the verb they are used with and the context; however, their most common meanings are:

When they are used with separate pronouns, such as أَنْتَ، أَنْتِ، أنَا، نَحْنُ، هُوَ، هِيَ، هُم، هُنَّ (a), we append the corresponding pronominal affix/suffix (b) to the prepositions and they form one single word typographically (c), as in these examples:

Looking at the table image above, it is clear that some prepositions undergo some typographical or diacritical changes. Let’s look at them and explain the irregularities.

For مِنْ, it gets shaddah ّ when نَا of نَحْنُ is appended to it, i.e. مِنَّا. As shown in the table, the first نْ has a sukuunْ  and the second has a fatHah َ, and the rule is when you have a sequence of two letters, the first with a sukuun ْ and the second with another diacritical mark, the two letters become one with shaddah ّ, i.e. مُشَدَّد, hence مِنَّا, so is the case with عَنَّا.

For إلى, it ends with alif maqSuurah ـى. The rule is whenever a word end in alif maqSuurah, it should change to a regular ـي  (يَاء) before appending a pronoun to it. Therefor, إِلَى becomes إِلَيْ, hence إِلَيْكَ إِلَيْهِ, إِلَيْنَا, إِلَيْهُم. And so is the case with the preposition عَلَى ‘on’, hence عَلَيَّ, عَلَيْنَا, عَلَيْكَ, عَلَيْهُم and so forth.

With nouns, prepositions stay separate, i.e. they are not appended, as in the last two columns of the table image above. However, their pronunciation undergoes some sort of blending in addition to a change in the diacritical marks.

Take مِنْ, the نْ gets fatHah َ when followed by definite nouns, namely nouns with الـ. This is because in Arabic it is forbidden to have two letters in a sequence with sukuun ْ (in this caseاْ  of الـ and نْ of مِنْ); therefore, نْ of مِنْ become نَ, that is مِنَ. When reading the whole phrase, the alif of الـ gets assimilated, so مِنَ البَيْتِ is pronounced as مِنَلْبَيْتِ. So is the case with الطَّالِبِ, except that with it both alif and laam of الـ get assimilated, hence مِنَ الطَّالِب is pronounced as مِنَطَّالِب because the ط belongs to the moon letters group.

Looking at عَنْ, you can see that the نْ gets kasrah ِ rather than fatHah َ, compared to مِنْ. Basically, the sequence of similar diacritical marks plays a role in pronunciation and overriding some rules. In عَنْ, the ع has fatHah َ, so it is a bit cumbersome to pronounce another fatHah on the نْ, thus kasrah is used in lieu, i.e. عَنِ. Therefore, عِنِ البَيْتِ  and عِنِ الطَّالِبِ are pronounced as عِنِلْبَيْتِ and عَنِطَّالِبِ, respectively.

As for إِلَى and فِي with nouns, both ـى and ـي are dropped in speech. Therefore, إِلَى البَيْتِ and إِلَى الطَّالِبِ are pronounced as إلَلْبِيْتِ and إِلَطَّالِبِ, consecutively. This is generalizable to all other definite nouns.

In the case of بـِ, the بـِ undergoes no change, but it causes the alif of الـ to assimilate and if the letter following the لـ is moon letter, the بـِ causes the whole ‘definite article’ which is الـ to assimilate. Thus, the pronunciation of بِالبَيْتِ and بِالطَّالِبِ is بِلْبَيْتِ and بِطَّالِبِ. This is another generalizable rule to all definite nouns (ال + noun) preceded by بِـ.