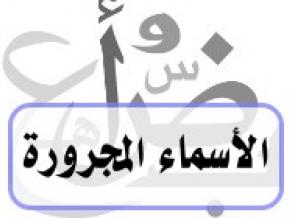 Genitives or Al-Majrourat الــمــجــرورات are the nouns that are in the genitive case. These nouns are marked by a Kas’rah كــســرة (or an equivalent) on the ending letter(s). In Arabic, the genitive case is called (Al-Jarr) حــالــة الــجــر and nouns that are in this case are called (الــمــجــرورات) or الأســمــاء المجرورة. Adjectives that modify these nouns/words are in the same case and have the same Harakah (Tashkeel).

These are the types of nouns that fall into this category:

In the above two examples, the words الــمــحــطــة (station) and الأســُــود (lions) are in the genitive case because they are preceded by the prepositions إلـى and مــن . They are both marked by a Kas’rah on the ending letter.

Ex. هــذه مــدرســة. = This is a school. (‘school’ here is an indefinite noun)

Ex. هــذه مــدرســتــي. = This is my school. (‘school’ here is a definite noun)

In the first example above, the word school is an indefinite noun. Whereas, the second and third examples it changes to a definite noun because there is another word (الأولاد) or attachment (the pronoun Yaa of the speaker) that is added after it to make it definite. The Idaafa (literally means ‘addition’) whether it is a noun or pronoun is called Moddaf and it is always in the genitive case with a Kas’rah on its ending. So, The pronoun Yaa of the speaker in the second example above is a Modaaf Majrour by the Kas’rah and so is the noun الأولاد (kids) in the third example. In the fourth example, the word الــمــطــار (airport) is modaaf to the word أرض and so it is Majrour by Idaafa too.