OR you can memorize this phrase which contains all these letters :

Note (1) : When the Laam is dropped, the letters above are doubled (You apply a Shadda to them)

Note (2) : The Laam is dropped only in PRONUNCIATION but It is written all the time. 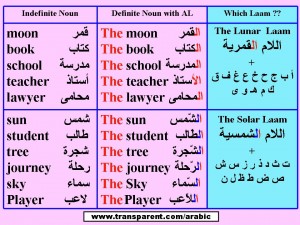 Next time, we will continue looking at Definite Demonstrative Nouns.