Eid al-Adha (عيد الأضحى‎) means “Festival of the Sacrifice” is the second of two Muslim holidays celebrated worldwide each year. It honors the willingness of  Abraham (إبراهيم) to sacrifice his son, as an act of submission to God’s command, before God then intervened, through his angel  Gabriel (جبريل) and informs him that his sacrifice has already been accepted. 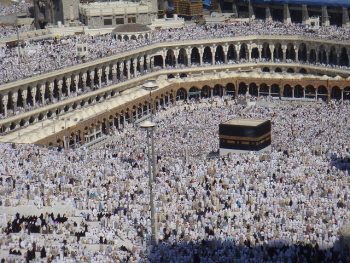 To celebrate the occasion, Muslims sacrifice sheep or other animals on the day of the feast. The meat from the sacrificed animal is preferred to be divided into three parts. The family retains one third of the share; another third is given to relatives, friends and neighbours; and the remaining third is given to the poor and needy.

In the Islamic lunar calendar, Eid al-Adha falls on the 10th day of Dhu al-Hijjah (ذو الحجة) and lasts for four days.

Eid al-Adha begins with a prayer (صلاة العيد) followed by a sermon (خطبة). Eid al-Adha coincides with the Muslim Pilgrimage (الحج). Celebrations start after the descent of the pilgrims (الحجاج)  performing from Mount Arafat (جبل عرفات).

In the morning of the Eid, Muslims repeat a special prayer (تكبيرات العيد):