Genitive Construction (GC), known as iDHaafah إِضَافَة, is usually encountered at the early stages of learning Arabic. The main reason for this is that a genitive construction, which is a phrasal (i.e. more than one word) structure can be used as a faa‘il فَاعِل ‘subject’ or a maf‘uul مَفْعُول ‘object’ of the sentence in lieu of a single word. In this post, you will get to know the essentials of GC. 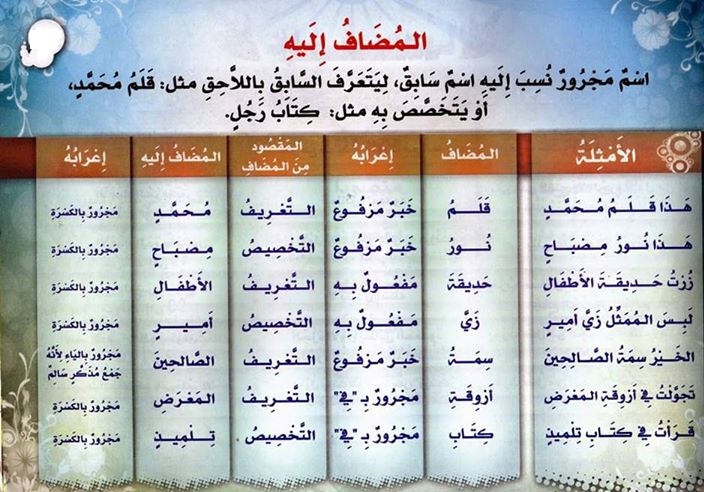 Image by Mohamed Khatab on flickr.com

It is a construction of two nouns (or more, in the case of complex constructions, in which you have multiple GSs inside each other, but for now let’s stick to the simple GS), in which one noun is attributed / annexed to the another. The purpose of this annexation is to delimit the added noun or to indicate its type. To delimit the annexed noun, it is added to a definite noun. In indicating its type/sort, it is added to an indefinite noun. Here are some examples (MSA rules observed):

Grammatically, the first part of the GC is called مُضَاف muDHaaf ‘the added/annexed’ and the second part is called مُضَاف إِلَيْه muDHaaf iilayh ‘the added-to/the annexed-to’. In terms of parsing and final diacritics assignment (i.e. case assignment), the first part is normally parsed (assigned a final diacritical mark) according to its position in the sentence, that is it could be a subject, an object, a topic, a predicate, or an object of a preposition. The second part is always assigned a genitive case, i.e. كَسْرَة kasrah in the case of singular nouns (and gets ين in the case of dual and plural nouns). Let’s put this into practice and use the above examples in meaningful sentences and assign the appropriate cases.

Depending on how the annexed noun المُضَاف is affected, GC is divided into two types: 1) GC that affects the meaning and 2) GC that affects the pronunciation. The first type is called in Arabic إِضَافَة مَعْنَوِيَّة iDHaafah ma‘nawiiyah ‘meaning-bearing GC’ in which the annexed noun is affected semantically. That is, it becomes definite, as in examples (a) and (b) or its type/sort is indicated, as in examples (c) and (d). In (a) and (b), سَيَّارَة  and اِبْن are made definite by adding them to a definite noun. In (c) and (d), the type of عَسَل and كِتَاب is indicated by adding it to another (indefinite) noun.

The second type is called إِضَافَة لَفْظِيَّة iDHaafah lafDiiyah ‘pronunciation-easing GC’ in which the annexed noun is neither defined nor typified. It is primarily meant to ease the pronunciation of GC, as illustrated in (e), (f), and (g) for singular and in (h) and (i) for dual and plural. In (e), (f), and (g), the two nouns are underlyingly لاعِبٍ كُرَةٍ, عَارِضَةٌ أَزْيَاءٍ, and رَجُلٍ دِيْنٍ, but, due to GC, the first noun gets a single corresponding diacritical mark. Similarly, in (h) and (i), the nouns are underlyingly طَالِبُون عِلْمٍ and طَالبَان هَنْدَسَةٍ, but, due to the GC, the ن is dropped, hence the pronunciation is eased.

When the annexed noun, i.e, the مُضَاف, is added to a pronoun, the corresponding object affix of the pronoun is appended to the end of the annexed noun forming a single word. Besides, it makes it definite, as in these examples:

There is a lot more to be said about GC in Arabic. This is to be a covered for a more advanced level in a future post.