King Hussein of Jordan Posted by yasmine on Nov 18, 2020 in Culture, Vocabulary

If you have visited Jordan or know a bit about its تاريخ history, surely you know of المَلِك حُسَين بِن طَلال King Hussein bin Talal. His pictures still hang in البيوت homes, المَدارِس schools, المَباني الحكومية government buildings, القاعات العامة public halls and even المَطاعِم restaurants. الشعب الأردني The Jordanian people like to be reminded of the king they revered so much. In this post, I thought we’d learn about this important شخصية عربية Arab figure and learn some new vocabulary along the way.

Before we head on to the الحَقائِق  facts, I thought to share a تَجرُبة شَخصية personal experience I had related to the late King Hussein. I moved to عمان، الأردن Amman, Jordan from the US when I was nine years old to live with my grandparents and be immersed in the Arabic language and the الثقافة الأردنية  Jordanian culture. It was 1999 and I was beginning fourth grade in a new language. On the day before my birthday, I was sitting in class and فجأةً suddenly there was all this ضَجة commotion, and my teachers were in tears. I did not know what was happening until a fellow student pointed to a photo of King Hussein we had hanging in the classroom and said that he just مات died. I looked at his photo trying to acknowledge the news. We went home early that day and the following morning I woke up on my birthday to watch the king’s دَفْن burial on television. The whole country was في حِداد  in mourning. 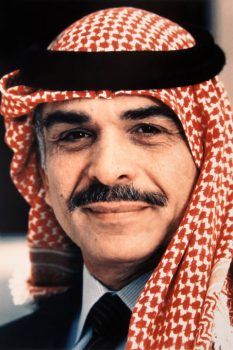 Image by KingHusseinFoundation on Flickr.com

I think the first question to ask is where would Jordan be if it wasn’t for المَلِك حُسين?

There is another important reason why he is so مَحبوب beloved by many. Have you noticed that Jordan is officially referred to as المَملَكة الأردنية الهاشمية the Hashemite Kingdom of Jordan? Who are الهاشميون the Hashemites? The Hashemite dynasty is the royal family of Jordan who have ruled since 1921. They are considered by many Muslims to be among the “People of the House,” أهل البيت the direct أحفاد descendants of the Prophet Muhammad and the traditional guardians of the holy cities of Mecca and Medina. الملك حسين was a 40th-generation direct descendant of the Prophet Muhammad.

الملك حسين was the country’s longest reigning leader. He died at the age of 63 from سَرَطان cancer on 7 February 1999. He was succeeded by his eldest son, who is the present ملك عبد الله الثاني King Abdullah II.

If you are interested in knowing more about الملك حسين, there are many افلام وَثائِقية documentaries on YouTube in English, yet here is a link to a documentary that is in Arabic.

I hope you found this post interesting. Till next week, happy Arabic learning! 😊