Making comparisons in Arabic Posted by yasmine on Feb 20, 2019 in Arabic Language, Grammar

How do we make comparisons المُقارنات in Arabic? It’s actually pretty easy and kind of similar to what we do in English. 😊 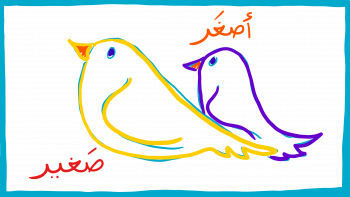 In English you would add an “-er” to the end and get bigger, shorter, faster, etc. In Arabic, the root letters of a simple adjective are put into the pattern (أفْعَل) in two simple steps:

Now that we know how to make the adjectives into the comparative form, we need to know how to compare things in an actual sentence.

As in English, we use the word “than” to compare two things; bigger than, shorter than, etc. In Arabic, we use “مِن”.

How would you say that (Egypt is bigger than Jordan?)?

How would you say that (The issue is less complicated than you think.)?

I hope you found the comparative in Arabic easy!

By practicing the comparative, you’ll end up learning many more adjectives to use in daily life. 😊