Names and Titles in Arabic Culture Posted by Ibnulyemen اِبْنُ اليَمَن on Oct 19, 2017 in Culture

In the Arab World الوَطَن العَرَبِي or العَالَم العَرَبِي, choosing a name for a newborn is in the main influenced by religion, that is it is always Islamic and derived from Arabic language. Some name their babies after a famous or influential person, some after an elder family member, and others follow what is à la mode. However, certain names are perpetually popular, regardless of trends and social mobility. 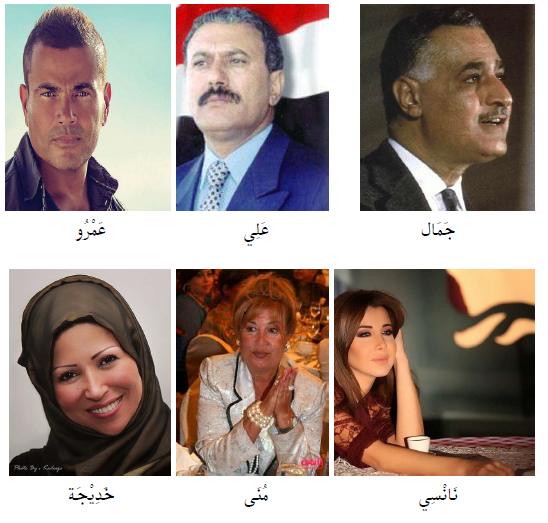 During the 1960s and 1970s, Jamal جَمَال and عَبْدُ النَّاصِر were very popular names across the Arab World. Many Arabs named their babies after Jamal Abdel Nasser, the president of Egypt from 1956 to 1970. Similarly, Saddam صَدَّام was a hugely popular name in the eighties and nineties, especially in countries like Yemen, Jordan, and Iraq.

In certain parts of the Arab World like Lebanon, Egypt, and Syria, a good many people tend to choose names that are more trendy and foreign-like, especially female names. On the other hand, people in countries like Yemen, Saudi Arabia, Oman, and Jordan pick names that are more traditional and profoundly rooted in Arabic and Islamic culture. This is, in part, owing the fact that tribal traditions and structure still constitute an integral part of these countries. In the Maghreb, i.e. Tunisia, Algeria, and Morocco, though much less tribal, people tend to prefer names that are more Islamic and Arabic in root.

It is derived from the Arabic root حَمَدَ ‘to praise’, and from this root the exaggerated form حَمَّدَ ‘to repeatedly praise’ is derived by adding the شَدَّة shaddah to the middle letter. مُحَمَّد is the passive participle nominal form which means the one who is overly and abundantly praised. Also, it is the name of the Prophet of Islam, Mohammed (pbuh).

Derived from the same root as Mohammed. It means worthy of praise. Also, it is another name for Prophet Mohammed (pbuh).

It is derived from the Arabic root عَلَا ‘to be higher in status or outstanding’. It means highly honored. Also, it is the name of the cousin and son-in-law of Prophet Mohammed (pbuh).

It is a compound name the first part of which means servant and second means Allah (God), hence ‘servant of God’.

Like Abdullah, it is a compound name that means servant of the Compassionate. الرَّحْمَن Ar-raHman is one of the names of God in Islam, which include 99 names referred to as أَسْمَاءُ الله الحُسْنَى asma’a Allah al-Husnaa ‘the Glorious Names of God.’

It is derived from the word عُمْر ‘umr ‘life time’. It means long life. It is also a popular name of a companion of Prophet Mohammed عُمَر بِنَ الخَطَّاب Omar ibn al-KhaTTab. He was a great Caliphate and most Arabs and Muslims name their Baby-boys after him.

It is derived from the root أَمُنَ ‘to have trust on’. It means honest or trustworthy.

It is derived from the Arabic root خَلَدَ ‘to last for a long time.’ It means the one who ages slowly compared to others. Also, it is a name of a famous companion and great warrior during the early days of Islam, خَالِد بِنَ الوَلِيْد Khalid ibn al-Waleed.

It is derived from the Arabic root حَسُنَ ‘to become beautiful/handsome’. It means the one who is beautiful and pleasant to look at. Also, it is the name of the grandson of Prophet Mohammed (pbuh).

Compound male names are popular in Arabic. They typically constitute two words forming an iDHafah Structure إِضَافَة. The first most popular is عَبْدُ followed by a name (of the 99 name of God), such as عَبْدُ الله Abdullah, عَبْدُ السَّلام Abdulsalam, عَبْدُ الفَتَّاح Abdulfattah and so forth. The second most popular is the one that ends in الدِّيْن -addin ‘religion’, such as صَلَاحُ الدِّيْن Salahuddin, نُوْرُ الدِّيْن Nouruddin, خَيْرُ الدِّيْن Khairuddin, and so forth.

In the Arab countries that are more embracing of Western values, such as Lebanon, Egypt, and Syria, baby-girls are named less conservatively compared to baby-boys. They tend to choose names that more catchy and foreign-sounding. Overall, there are some traditional female names that are very common. Some of these are فَاطِمَة (Fatima), مَرْيَم (Maryam), نُوْر (Nour), سَارَة (Sarah), جَنَى (Jana), حَلَا (Hala), and زَيْنَب (Zainab).

Fatima is the daughter of Prophet Mohammed (pbuh). Showing the love and affection for her, Arabs and Muslims name their daughters after her.

It is a Semitic name that means the lady. Maryam is the daughter of Imran and the Mother of Prophet Jesus (pbuh). The story of Maryam is narrated in the Holy Quran in a chapter called سُوْرَة مَرْيَم surat Maryam.

It is an Aramaic name. It means the princess or noble lady. Sarah was the wife of Prophet Ibrahim (pbuh).

It is derived from the Arabic root جَنَى ‘to reap / harvest’, so it is associated with gardens of fruits. It also means honey, gold, or white beads.

It is derived from the Arabic root حَلَا ‘to become sweet’ or ‘to ripe’.

It is a name of nice-looking plant/tree that is pleasantly fragrant. It is also the name of granddaughter of Prophet Mohammed (pbuh).

In most Arab countries, people are called by their first names. In official documents, they always have three- or four-part names, i.e. first name, father’s name, grandfather’s name, and the surnames. In the countries that still maintain the tribal structures, such as Yemen, Jordan, and Gulf States, surnames are always used. In other countries, last names have been avoided since the early and middle of the 20th century. This was part of the socialist-communist movement at the time which aimed at treating people equally, i.e. no one should be preferred or privileged on the basis of their tribal roots.

Calling people by other names, other than their legal name, is common in among Arabs. For men, أبو abu, which literally means ‘the father of’ followed by regular name is used, such as أَبْو مُحَمَّد abu Mohammed, أَبُو شِهَاب abu Shihab, أَبُو زَيْنَب abu-Zainab and so forth. A male does not have to have a son to be called abu-X, i.e. even a child can be nicknamed as abu- X Y or Z. So is the case with women/females. The prefix abu- is replaced by أُمْ / أُمُ umm- / ummu- which mean s ‘the mother of’, hence أُمُ مُحَمَّد Umm-Mohammad, أُمُ خَالِد Umm-Khalid, أُمْ زَيْنَب ummu-Zainab, and so forth.

Christian Arabs use Arabic and Islamic names, contrary to the common beliefs. It is not impossible that you find a Syrian, Lebanese, Jordanian, or Egyptian Christian whose name is Khalid, Mohammed, or Huda.