Take Away My Passport Posted by jesa on Nov 16, 2012 in Arabic Language, Culture, Vocabulary

Marcel Khalife (مارسيل خليفة)is an accomplished oud (عود)player, singer, and composer. He was born on June 10, 1950 in Amchit, a coastal village next to Jbeil in Lebanon. He studied the Oud at the Beirut National Conservatory of Music, where he graduated in 1971. Following his graduation and starting in 1972 till around 1975, Khalife became a music instructor and began teaching at his school, other public universities  (جامعات رسميّة) in Lebanon and other prestigious private institutions (مؤسَّسات خاصَّة). Khalife did not only dedicate his time to teaching at the Conservatory, but also began touring the Middle East, Europe, North Africa and the United States of America playing to thousands and giving performances on the Oud. In addition to being an accomplished Oud player, Khalife is also a renowned singer with a soft Oriental voice that touches and enchants the hearts of many listeners around the world.

Khalife has also composed many purely instrumental works like the Symphony of Return(ديوان العَودَة), Diwan al Oud, and Al Samaa. Khalife’s instructors at the Beirut National Conservatory of Music were very traditional and strict with regards to specific techniques and methods that governed the proper playing of the Oud. Khalife among others is renowned for developing musical techniques (تِقَنِيّات)and methods that freed the Oud from traditional constraints, which in turn allowed other skilled artists and musicians to internalize these techniques. Khalife’s musical innovations are viewed as diverse ways that aimed to expand the musical possibilities of a traditional musical instrument like the Oud. His techniques in the Orient are viewed by many as revolutionary. In 1976, Khalife created a musical group in his hometown called ‘Al Mayadine Ensemble.’ This ensemble went beyond Khalife’s hometown and became a popular group that toured different regions of the world. His ensemble has performed at many of the most important capitals of the world, including the World Music Festival in San Francisco, New York and the Fes Festival of World Sacred Music in Morroco.

Khalife’s musical innovations and compositions do not only reflect beautiful musical notes and tunes, but also a powerful message through magnificent and deep lyrics. Khalife has had an association with many Arab poets, especially the famous Palestinian poet Mahmoud Darwish.

In his latest musical tours around the world, Marcel Khalife and the Mayadine Ensemble are performing “Fall of the Moon,” which is a homage to Mahmoud Darwish and a salute to the Arab Spring. 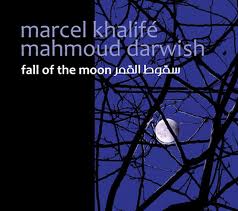 In this post, I will share one of Mahmud Darwish’s famous poems called ‘Passport,’ which Khalife has turned into a beautiful and majestic musical masterpiece. I have added the song in a YouTube video at the end of this post.

They did not recognize me in the shadows (الظِّلال)

That suck away my color (لوني) in this Passport

And to them my wound (جُرحي) was an exhibit (ًمعرضا)

For a tourist (سائِح) Who loves to collect photographs (الصور)

They did not recognize me,

The palm of my hand without the sun (شمس)

Because the trees recognize me

All the songs (أغاني) of the rain recognize me

All (كلّ) the birds (العصافير) that followed my palm

To the door of the distant airport (المطار)

All the white tombstones (القُبور)

All the barbed boundaries (الحُدود)

All the waving handkerchiefs (المَناديل)

All the eyes  were with me,

But they dropped them from my passport

Stripped of my name and identity (الإنتماء)?

On a soil (تُربة) I nourished with my own hands?

Filling the sky: Don’t make an example of me again!

Don’t ask the trees for their names

Don’t ask the valleys (الوِديان) who their mother is

From my forehead bursts the sword (سَيْف) of light

All the hearts of the people are my identity

I hope you enjoy these beautiful words sung by Khalife while playing the mystical Oud and reflecting on the hardships and grievances of many people in the Arab world, especially Darwish’s homeland Palestine and Khalife’s homeland Lebanon.