The Semi-sisters of Kana; Kada and its Sisters (Part 1) Posted by Fisal on Mar 29, 2012 in Arabic Language, Culture, Grammar, Pronunciation, Vocabulary

We have already been introduced to the special verb Kana and its sisters كان و أخواتها and we have known that these verbs start the nominative sentence الجملة الاسمية and cause the mubtada المبتدأ (subject) to be their noun (Ism اسم) and the khabar الخبر (predicate) to be their khabar. Only the khabar changes its case from nominative to accusative which means that we apply a Fat’ha فتحة on its ending. We have also known the meanings of these verbs. Today we will be introduced to some other verbs that are considered sisters of the verb Kana; that is to say that they do the same job as the verb kana and its sisters. These verbs are called Kada and Sisters       كاد و أخواتها . In the Arabic language these verbs have their own names that are determined according to their meaning. These semi-sister verbs of Kana or the verb Kada and its sisters can be classified into three categories: 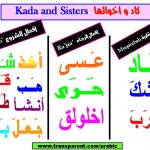 These Muqarabah verbs, as their name indicates, means that the Khabar is about to happen; it is approaching. There are three of these verbs and they are كاد / أوشك / كرب and all of them mean the same; the khabar is near or about to happen.

These verbs, as it is clear from their name, refer to an action that is hoped to happen; there is a hope that the predicate will happen. There are three of these verbs: عسى  / حرى / اخلولق

–  أخلولق الطالب أن ينجح   = I wish that the student could succeed.

These verbs refer to the start of an action; here the predicate is starting to happen. There are so many verbs in this last category. Some of these verbs are: أخذ  / شرع / هبَّ / قامَ / أنشأ  /  طـفـِـقَ / جعل /  بدأ

To listen to the pronunciation of these verbs, visit our Arabic Transparent Youtube channel at; http://www.youtube.com/user/ArabicTransparent