What is the Active Participle in Arabic? (I) Posted by Ibnulyemen اِبْنُ اليَمَن on Aug 31, 2017 in Arabic Language, Grammar, Vocabulary

The active participle (AP) is known as اِسمُ الفَاعِل in Arabic. It is one of many Arabic noun types that are derived from active verbs. Depending on how it is used in phrases or sentences, AP can be classified into two forms: adjectival (i.e. like an adjective) noun and non-adjectival noun (i.e. the doer or agent). I will give an in-depth explanation of the regularities and irregularities of their derivation, usage, and grammatical impact on other words within phrases and/or sentences. 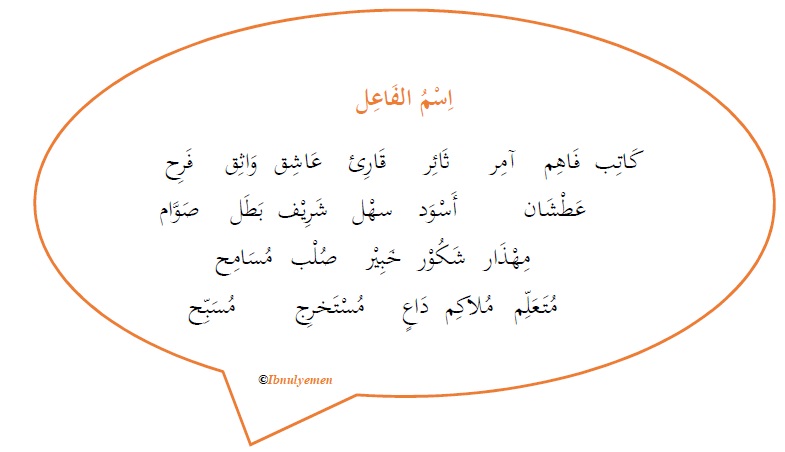 In both nominal and verbal sentences, if the AP اِسمُ الفَاعِل is used predicatively (i.e. after another noun), it is an adjectival noun. However, if it is used in the subject position (i.e. as a doer/agent of an action), it is a regular noun, as in these examples:

The first sentence is a verbal sentence (because it starts with a verb, يَعْمَل). It includes two active participles: المُوَظَّف and المُخْلِص. The first is a regular AP, and it is the subject of the sentence, while the second is an adjectival AP, and it functions as an adjective; therefore, it agrees with the preceding noun (i.e. the noun it describes) in gender, number and definiteness.

The second sentence is a nominal sentence (because it starts with a noun, الطَّالِب). It has, as you may know, two parts the subject المُبْتَدأ and the predicate الخَبَر. The sentence is composed of three words, and each one of them is an AP. الطَّالِب is the doer/agent, so it a regular AP/noun. النَّاجِح immediately follows الطَّالِب and it agrees with it in gender, number and definiteness; therefore, it is called an attributive adjectival AP/noun. مُتَفَوِّق is the predicate الخَبَر, and single-word predicates in Arabic nominal sentences agree with their مُبْتَدأ only in gender and number, so they are called predicative adjectival nouns.

As you may have come across in some Arabic grammar books, which are written in English except for sprinkles of Arabic words, there are 10 forms of the Arabic verb. Here, I won’t use this type of classification. In lieu, I will refer to two forms, simple and complex, as I explained here. In particular, I will explain how the AP اِسْمُ الفَاعِل is derived from simple and complex verbs.

The simple Arabic verb, which is referred to as Form I in the Arabic grammar books alluded to above, is the verb that constitutes three consonantal letters (i.e. ثُلاثِي or tri-consonantal) in its default state, which the past form without affixes. Some examples of this are كَتَبَ ‘to write’, قَاْلَ ‘to say’, صَمَتَ ‘to be silent’, فَهِمَ ‘to understand’, فَرِحَ ‘to be happy’, and ضَخُمَ ‘to become huge’.

Scrutinizing the verbs that I just cited, you can see that the vowelling or the diacritical mark of the middle letters vary. This variation is a key factor in the derivation of the AP. Another important factor is to find out whether the verb is transitive or intransitive. With this in mind, except for the intransitive verbs that have either DHammah or kasrah on the middle letter, AP is always derived by adding an alif after the first letter and changing the fatHah of the middle letter to kasrah, hence كَاتِب from كَتَبَ and صَامِت from صَمَتَ. Here are more illustrative derivations:

If the past form of the tri-consonantal verb includes a hamzah أ, the AP is still derived in the same manner, yet it (the hamzah) changes typographically. Verb-initially, it combines with the alif of the AP and becomes maddah آ, so أَخَذَ becomes آخِذ. If the hamzah occurs in the middle of the verb, as in سَألَ, it changes shape when deriving AP, namely from أ to ئـ, hence سَألَ becomes سَائِل. Similarly, if the hamzah occurs at the end of the verb, it changes shape from أ to ئ, so قَرَأ become قَارِئ. Here are more illustrative derivations:

If the past form of the tri-consonantal verb is مُعْتَل irregular (as explained here) due to the middle letter being weak, namely alif ا, the AP is also derived in the same way, that is by adding the alif of the AP after the first letter, but the weak alif ا of the verb has to change to hamzah written like this ئـ, hence قَالَ become قَائِل. Here are more illustrative derivations:

If the weak is و waw or ي yaa’, it does not change typographically in both initial and medial position of the verb. For example, the AP of the verb وَصَلَ ‘to arrive’, which is irregular because of the initial weak letter, is وَاصِل; that is, we simply add the alif of the AP. Similarly, if either of these weak letters are in the middle of the verb, they don’t change, hence عَوِرَ ‘lose sight’ becomes عَاوِر. Here are more illustrative derivations:

In next week’s post, I will cover the remainder of active participle formation, usage, and its grammatical impact on phrases and sentences. Stay tuned!

Here is a list of the words included in the above explanation listed alphabetically:

For those who are familiar or are celebrating Eid عُيْدُ الأَضْحَى, which is tomorrow September 1, 2017, I wish you all a very  happy and joyous Eid. Cheers!