What You Find at a Maza Breakfast Posted by yasmine on Aug 21, 2019 in Arabic Language, Culture, Vocabulary

For the last twenty days, I’ve been visiting family in Jordan and Turkey and enjoying maza breakfasts every morning. I think when Arabic breakfast comes to mind, some may think only of hummus and falafel. But, an Arabic breakfast spread has so much more variety. In this post we’ll be learning about some common Arabic breakfast foods and talk a bit about how it is served and eaten. We’ll also learn different ways to say “delicious” and the meaning of صَحتَين which you will definitely here when having a meal with Arabic speakers, and how it is used.

(A soft cheese, similar in texture to cream cheese, made from strained yogurt.)

(thyme mixed with spices eaten with bread and olive oil)

(Many Arabs are proud of the different types of jams they make at home, such as apricot jam, strawberry jam, and raspberry jam.)

(Honey is eaten with bread and also drizzled in tea or hot water.)

(Halawa is made from sesame paste, nuts, butter and sugar.)

(Not always part of breakfast.)

(Manakish is a popular Levantine food consisting of dough topped with thyme, cheese, or ground meat.)

(Can’t have breakfast without tea. You will be offered many refills of tea throughout your breakfast.)

Note: All these breakfast foods serve as a light supper as well. 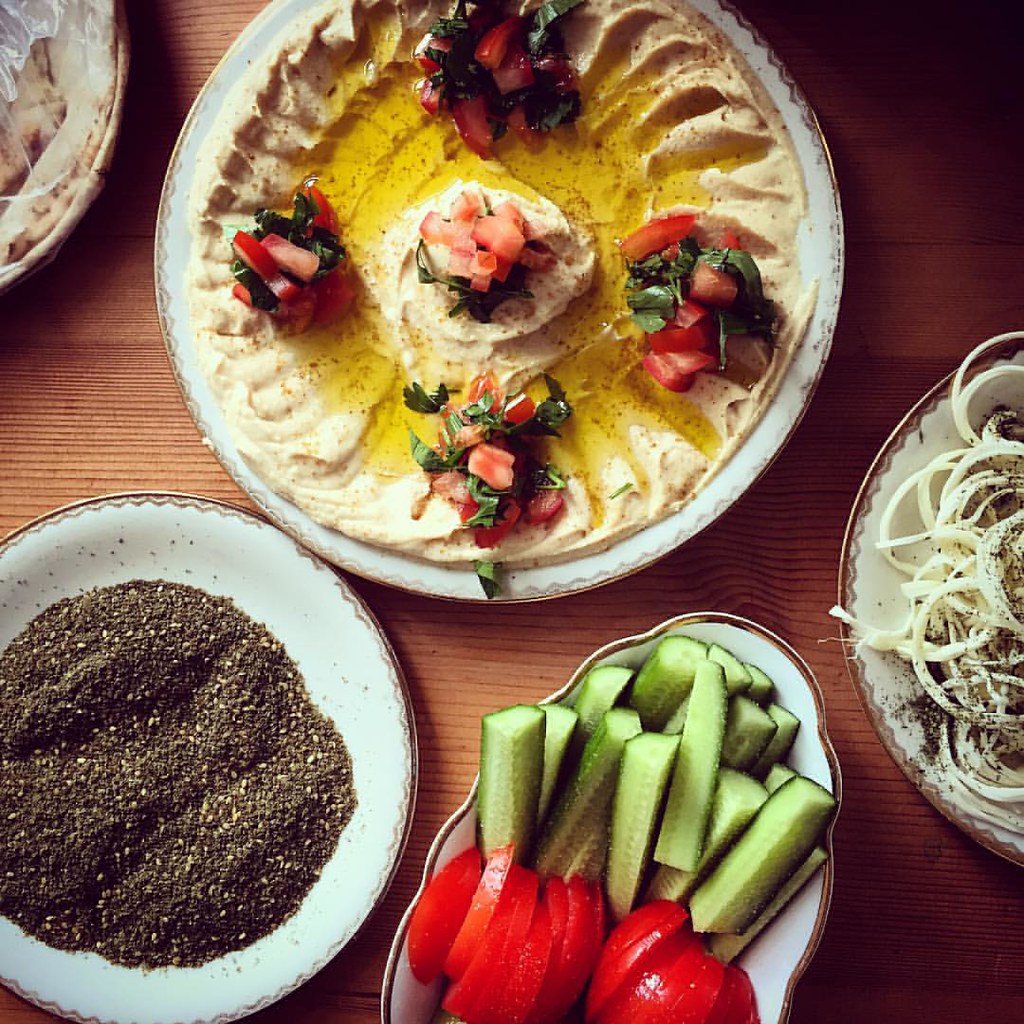 A typical Middle Eastern breakfast is made up of many little dishes and plates of a variety of cheeses, olives, eggs, jams, sliced vegetables and fruit, hummus, etc. This spread is called a “maza” breakfast فطور مزه. Fresh bread and hot tea are served, and everyone takes a little from every dish either with a little spoon or by scooping up with a piece of bread. Some main breakfast foods include “manakish” مناقيش which is a popular Levantine food consisting of baked dough topped with thyme, cheese, or ground meat. Another popular breakfast food is “zaatar” زعتر which is actually thyme mixed with spices. Bread is dipped in olive oil then into the zaatar.

Note: Try not to double dip your bread into a shared dish. Some people don’t mind, but some do. You could always scoop some dip into your own personal dish too. 😁

Here are a few ways to say something is yummy or delicious in Arabic.

What does صَحتَين mean and how to reply?

Once your finished eating, or sometimes while you’re eating, the person who prepared the food or the host will say “صَحتَين”. There is no exact equivalent to this phrase in English. The closest equivalent is the French phrase Bon appétit which is also used in English. صَحتَين is derived from the word صحة meaning “health”. Do you recall the dual form in Arabic? صَحتَين is the dual form of صحة meaning “health” making it “two healths”. Arabic speakers sometimes like to use the dual form for emphasis. Another example is using the dual form of “hello” مرحبا. Someone says مرحبا, the other replies مَرحبتَين “two hellos”. So, by wishing someone eating صَحتَين, you are exaggerating your wishes of good health.

The appropriate reply to صَحتَين is على قَلبَك meaning “health to your heart”.

Have you tried a Meza breakfast before? Till the next post, صَحتَين from me to you on your upcoming meals! 😋